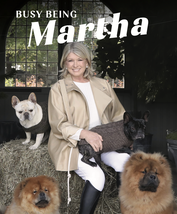 MARTHA STEWART has been America’s lifestyle icon for four decades, and she’s just as relevant as ever. Broadcasting her new Martha Knows Best show on HGTV from her 153-acre home and farm, Cantitoe Corners, on the Bedford / Katonah border, hundreds of thousands of people commenting on her posts, still publishing Martha Stewart Living in print and online, and always selling a new book and fresh line of kitchen, bath or garden products…She’s the doyenne of domestic, the professor of proficiency, her honor of the home. She’s been an influencer since before there were influencers.

Explaining her career, Martha recounts: “I was lucky to choose an area of focus – the home and living – that’s infinite and involves everyone. I was a stockbroker and I probably could have been a CEO of some big company, but I chose to do what interested me. 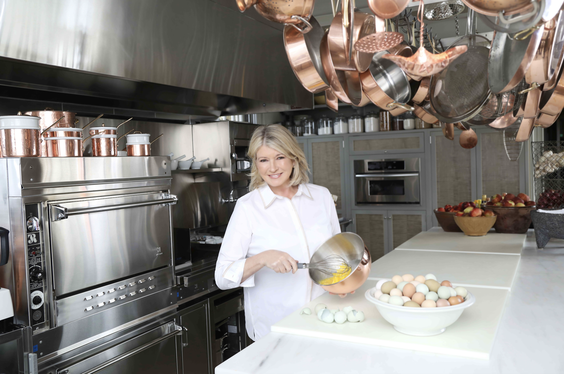 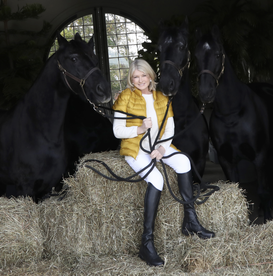 I published my first book in 1982, and it’s only grown over the years. I think of myself as a teacher, and in order to be a good teacher you need to be constantly learning at the same time. I’m always curious and inquisitive.I think people see that I try to learn everything about what I do, and they trust me to make good choices and help them live a healthy and wholesome lifestyle.”

“I’ve also always been a student and an early adopter of technology. I got my first laptop in 1989 and I realized immediately that new media and the internet would change the way we communicate. I’ve tried to stay in front of that, on TV and online. It’s allowed me to keep growing my audience and my demographic. As times have changed, and particularly now, while we’re all trying to live with covid, and all trying to improve our houses and maybe grow some of our own food, more and more men, and younger generations, are more and more interested in things inside and outside their home. My audience used to be women 38 to 65, but now everyone is focused on living a good and healthy lifestyle.”

​The reality is that Martha Stewart is really busy being Martha Stewart. Quite contentedly, her job is her life, and her life is her job. Life imitates lifestyle. 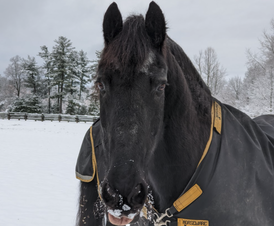 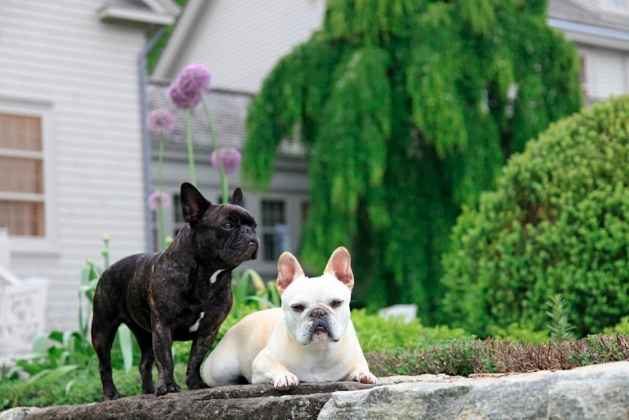 Despite quarantine, and with only a skeleton of the large staff that normally operates Martha’s greenhouse, gardens, stables, coops, kitchen and home, this year Martha managed to produce a 6-episode first season of HGTV’s Martha Knows Best that aired this summer, and an 8-episode second season that’s currently available. She has Martha Stewart Wine Co., a curated selection of wine, handpicked and approved by Martha, that will arrive at your doorstep – as if Martha brought it over herself- and she has the Martha Stewart Collection created for Macy’s and she’s collaborating with California Closets on a modular collection meant to solve a wide range of household organizational needs. She’s got Martha & Marley Spoon, a food kit delivery service with an emphasis on healthy meals that has Martha’s recipes included. And then she’s most excited about her new line – of all things – of CBD products, developed with Canopy Growth. She explains: “I’m not a big taker of anything, but my friend Snoop, and the folks at Canopy, got me into it. I learned everything there is to know about CBD, and I worked with Canopy to make these great CBD products. The gummies are the most delicious.
I take them and I love them. They help me to go to sleep. And I hear from friends that I’ve given them to that they have all sorts of benefits. And it’s not just my old lady friends, it’s kids in their 20s and 30s.” Martha is, famously, best ‘buds’ with Snoop Dog. It gives her street cred to sell CBD and other risqué products and reach a broader audience on social media. And it leaves everyone wondering about this odd couple. 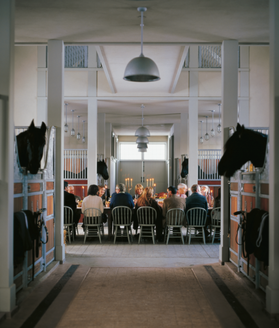 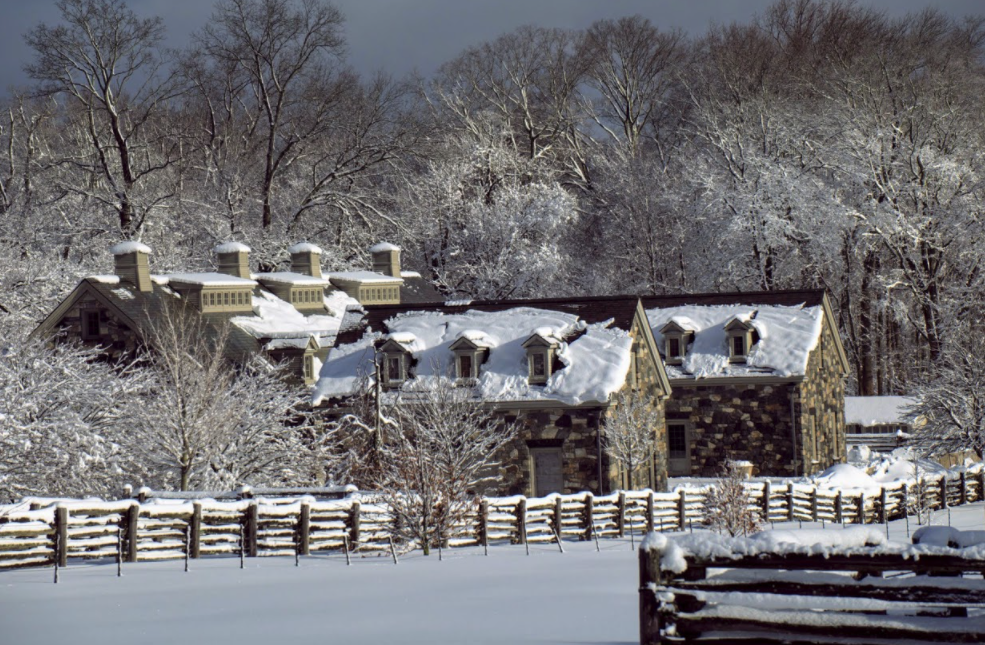 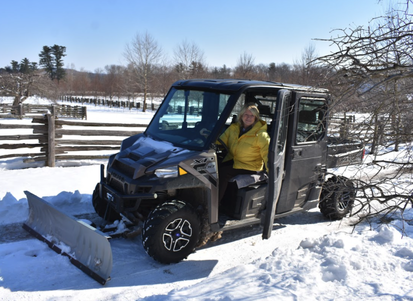 Martha’s manse is set on the Bedford Riding Lanes Association trails, between the Cross River Reservoir Recreation Area and neighbors Ralph Lauren, Caramoor and the John Jay Homestead. She rides a couple of times a week, for what may be the most private time she gets to enjoy. “I’m a long time member and supporter of the BRLA. I’ve had my groomsman map the entire thing on GPS and I’ve been out on every mile. BRLA is a great organization and the riding trails are a real asset,
I highly recommend. I love getting out with some of my friends and going for a ride. One of my favorite things is to ride over to the Farm Market at John Jay Homestead on Saturday mornings to pick up some artisanal foods and get a smoothie or a fresh glass of cider with some tasty baked goods.” 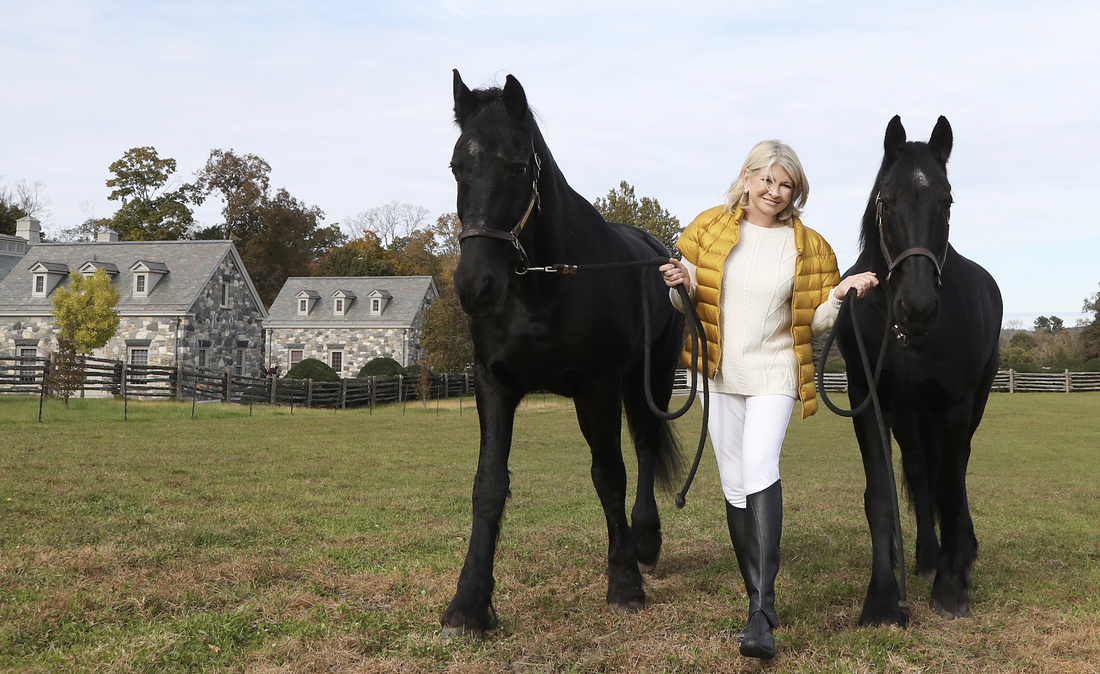 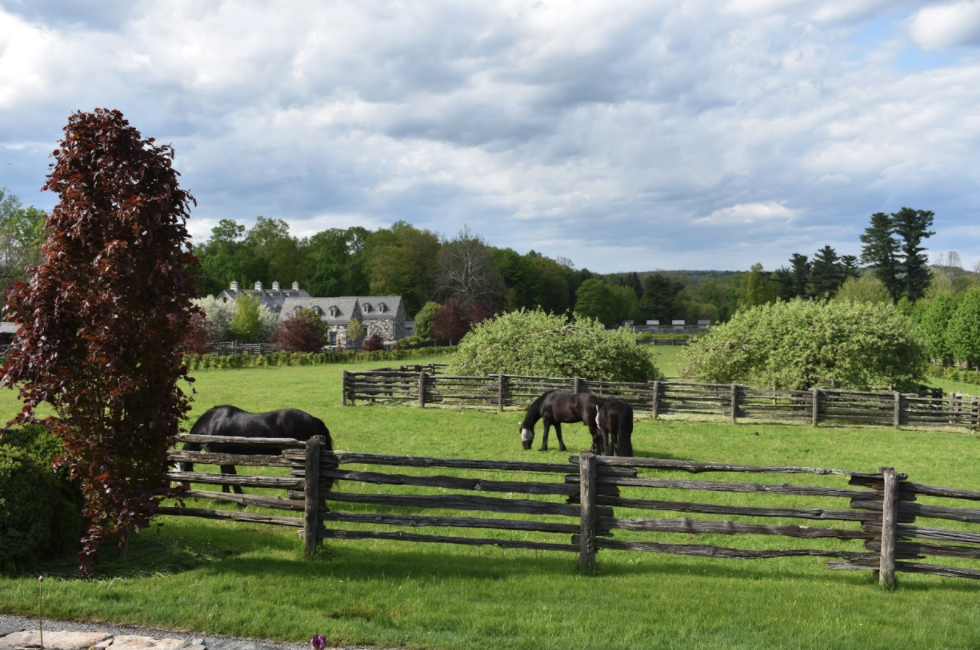 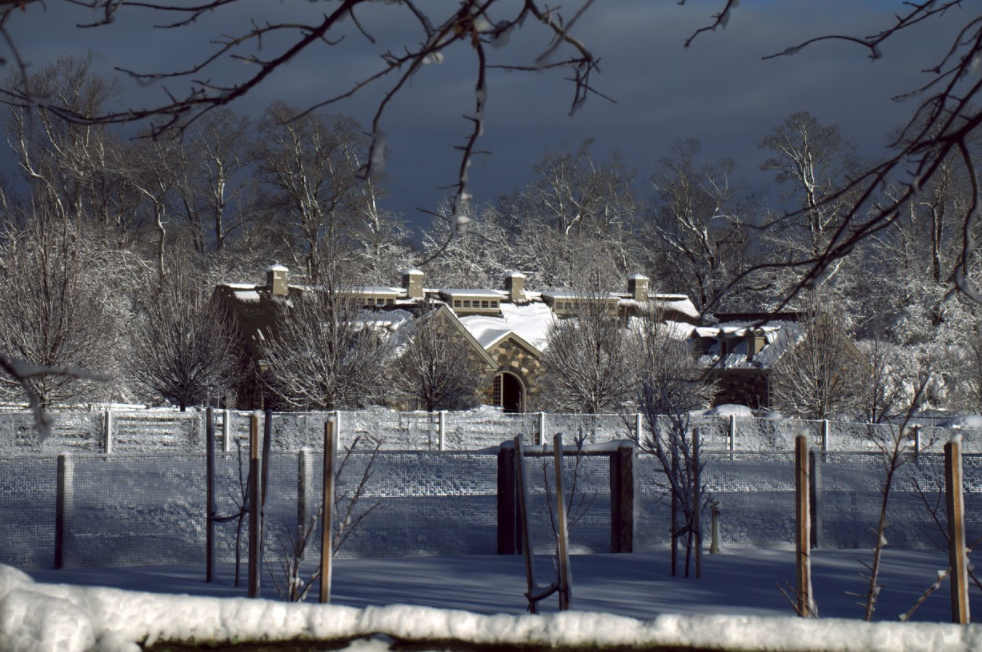 Martha knows every boldface name who lives around here, and is an encyclopedia on who’s done what in life and business. She wouldn’t dish on exactly who else is out on the trails with her, saying that “a lot of the folks around here want to maintain their privacy”, but she did say she sometimes sees Pound Ridger, RIchard Gere, and “his beautiful family”. (Gere popped in for a visit on Season 1 of Martha Knows Best.) Martha did tell us she’s a fan of The Horse Connection, an equestrian shop in Bedford Village that was actually the original Bedford Tack Store, that boasts a who’s who clientele amongst the local horsey set.
In one reveal of her life beyond lifestyle, in 2014, Vanity Fair reported that Martha told Haute Living that she was “looking for a partner [and would] love to have a more regular male companion”. Six years later, she’s still single, and admits, “I guess I’ve gotten used to it. For me, there’s romance, but no relationship I’m going to report. Maybe I’ve focused so much of my life on what I do that there’s just not enough room for the rest.” Yet it’s hard to imagine why eligible suitors are not lined up at the door and/or why none has earned note. Even harder after seeing the wow! selfie Martha posted from her pool in East Hampton. The pic was so hot that Chelsea Handler mimicked the post, and the whole thing went viral. Within days, Martha got hundreds of thousands of likes and tens of thousands of comments, and, she quips, “I got a couple of proposals”. At 79, Martha gained a spot, along the likes of Christie Brinkley, on the pop culture list of ‘still hot’. Martha declares that “I don’t really pay much attention to age. I’ve always had plenty of energy. I think a healthy lifestyle is key to feeling and being young and looking good.”

Photo from Instagram: @marthastewart48 caption: My pool in East Hampton is the place to be on a 89 degree day! When I built the pool thirty years ago it was designed to be as chlorine free as possible, with a natural concrete finish-no paint- and it fit in a long narrow space between the house and the property line. I made it extra deep for diving and with no protruding steps so we could really race the length without worrying about obstacles. After all these years, it is a fun place to swim!!! 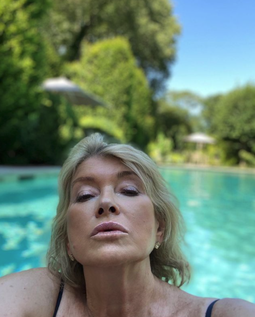 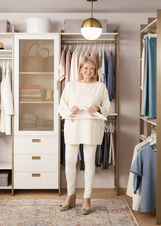 Martha developed the Everyday System with California Closets, which she uses in her own home. This collaboration is a modular modern collection intended to solve organization needs throughout the house.
Whether the pic was Martha being foxy, or playing social media like a fox, she surely knows how to get an audience’s attention. Martha is focused on the Kardashians’ social media prowess, but Kanye has come to Martha for some business ‘wo-mentoring’. “I really like Kanye. He came up to me at a party and asked to come see me, and he showed up the next day and wanted to talk about everything. Now we’re friends.”

For the holidays, Martha says: “I always do a family dinner for Thanksgiving. We’ll do that this year. Then we usually throw a big holiday party. I think we had 300 people last year. I guess we won’t be doing that this year. And then for Christmas, I usually take my 2 grandchildren traveling to exotic places. They’ve been to six continents and we have Antartica planned. We’ve been to the Galapagos, which is just wonderful, and to Africa, and we just have the best time. But with Covid, we’re not going to be able to do any of that. Like everyone else, we’re trying to figure it out. I think maybe we’ll do something here at home, and I’ll get all the kids baking, making some ice cream, and working with the hens, like old times. My new cookbook, Martha Stewart’s Cake Perfection, which is my 97th book by the way, has a yummy chocolate cake I’ll definitely use with the kids.” 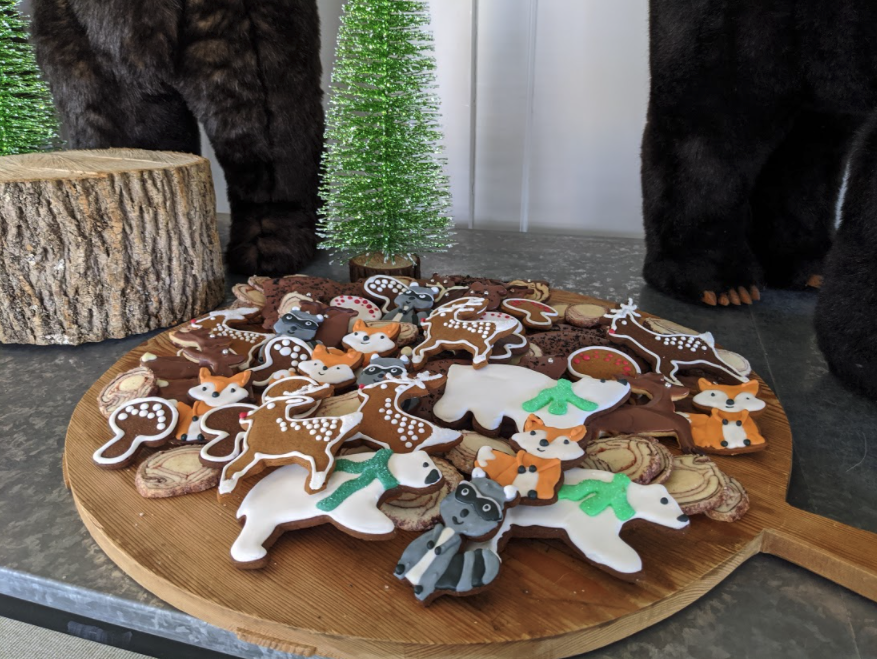 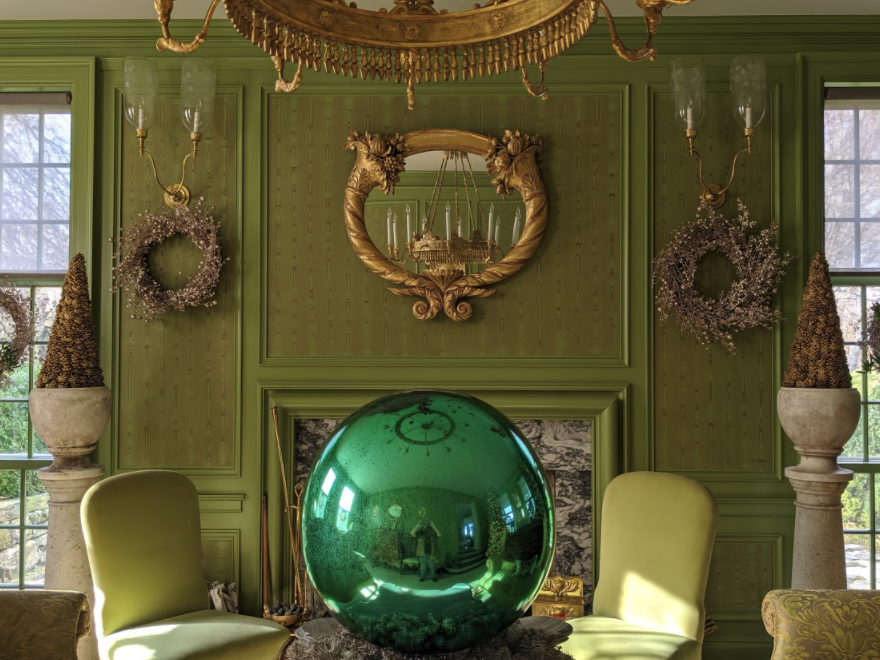 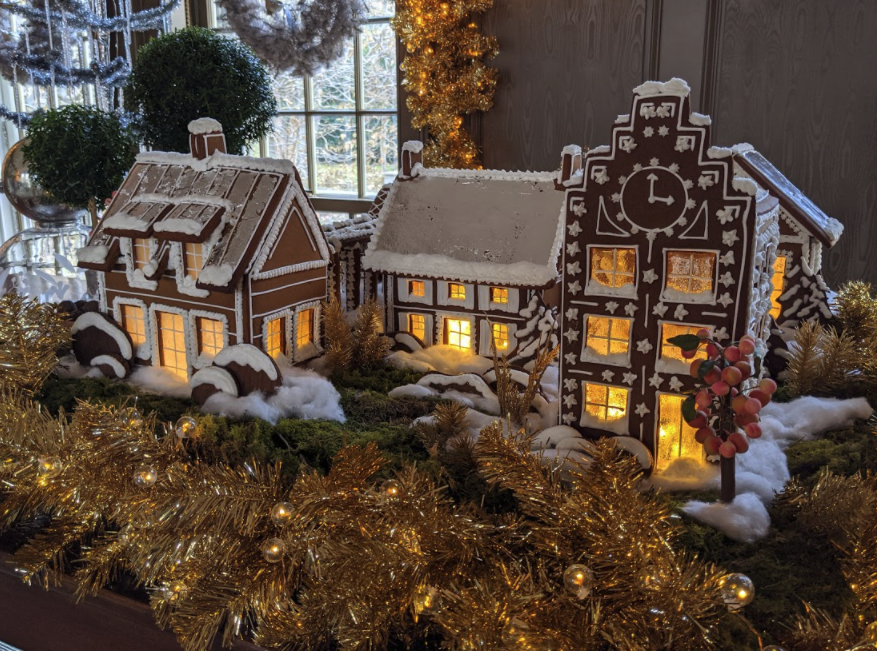 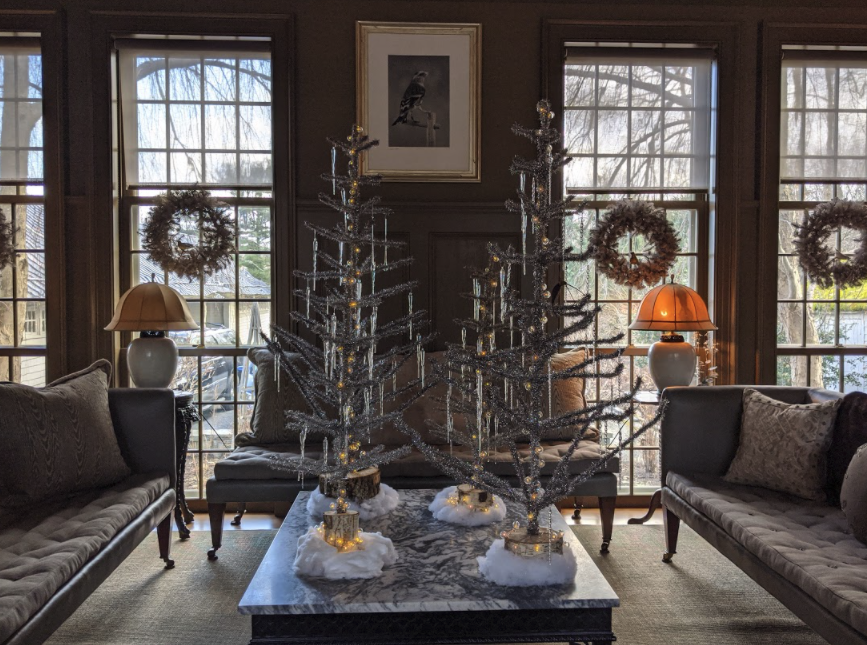 And for a fantasy dinner party for four – able to invite any three guests, dead or alive – Martha invites, “Ruth Bader Ginsburg, Hilary Clinton, and, because I’d like another strong woman to make it a perfect group, Margaret Thatcher. I’d serve a terrific dinner and we’d have a fabulous conversation. And I’d give them some of my CBD gummies with tea and desert, so they’ll go home happy and ready for a good night’s sleep.” 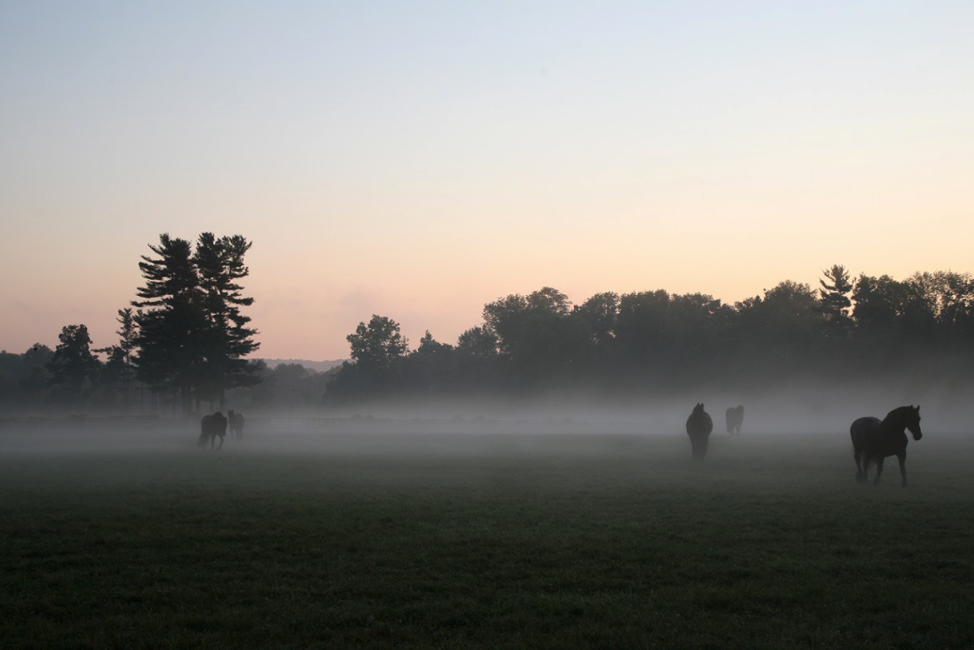 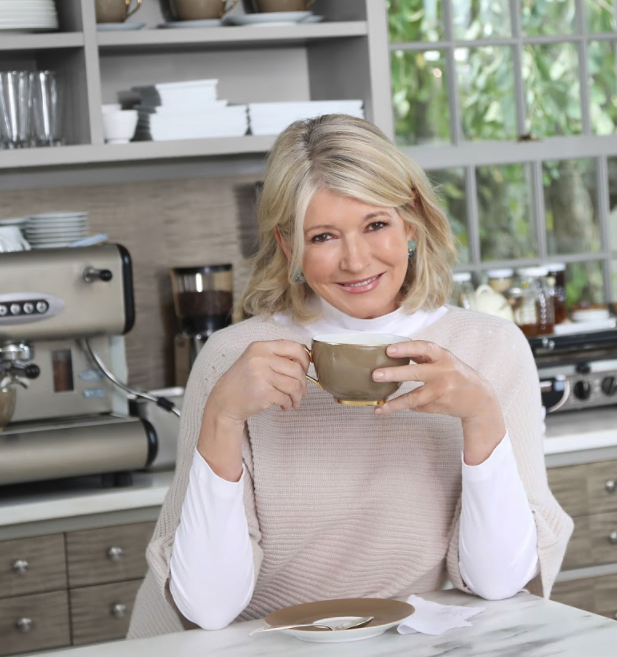 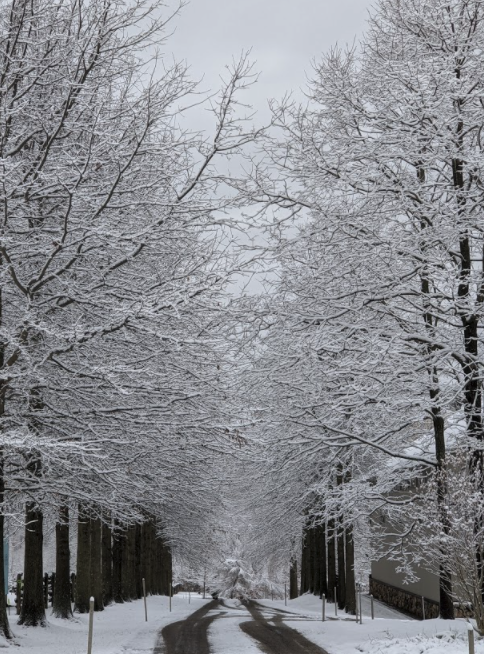 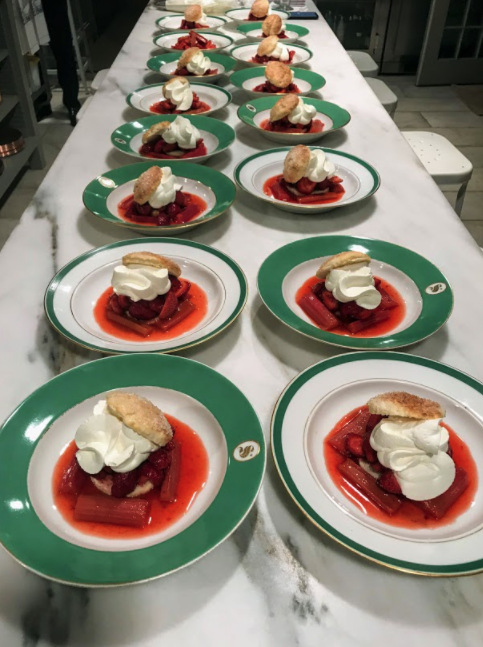 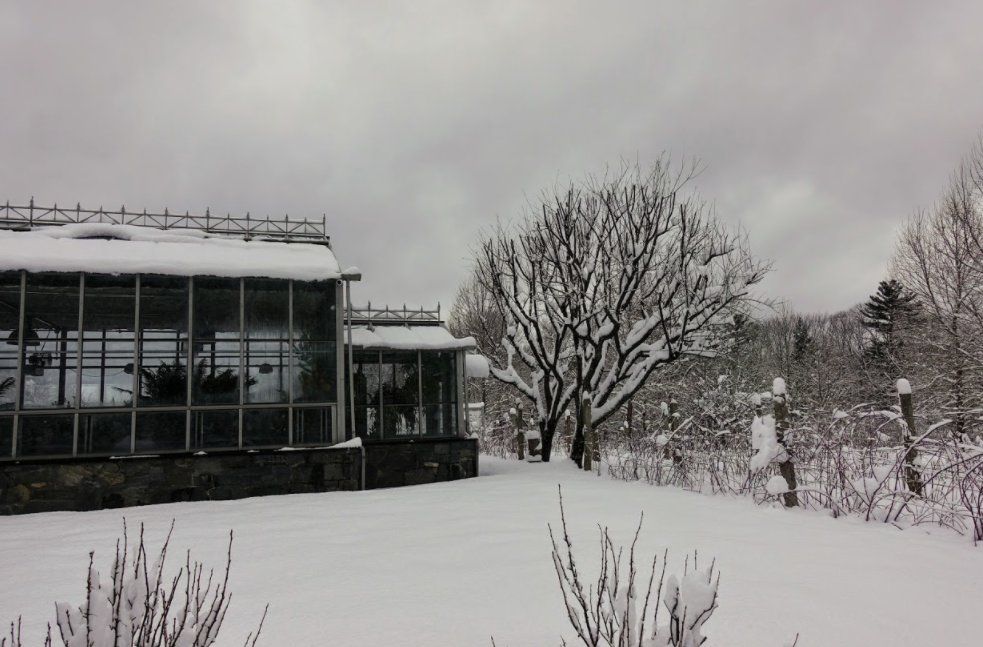 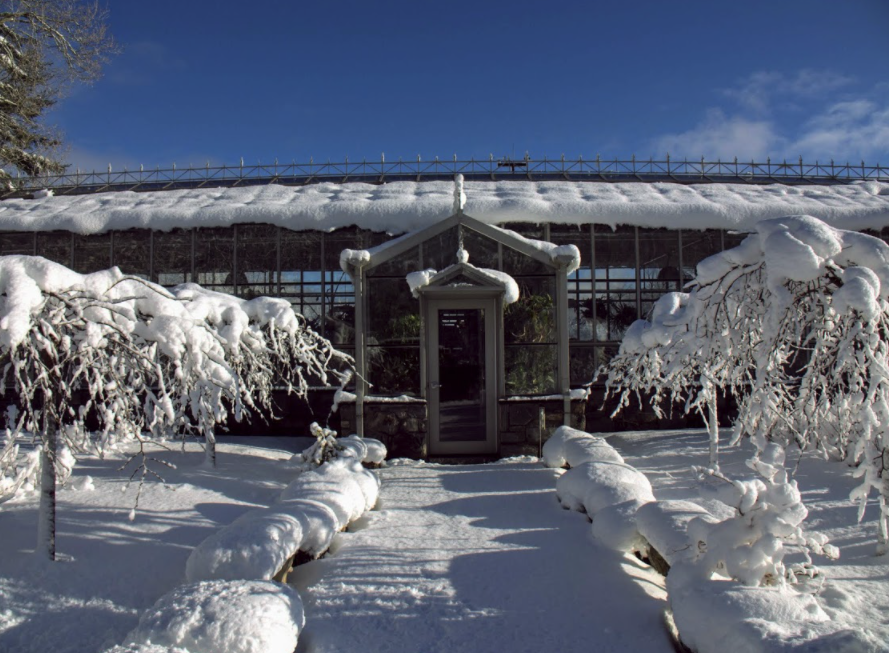 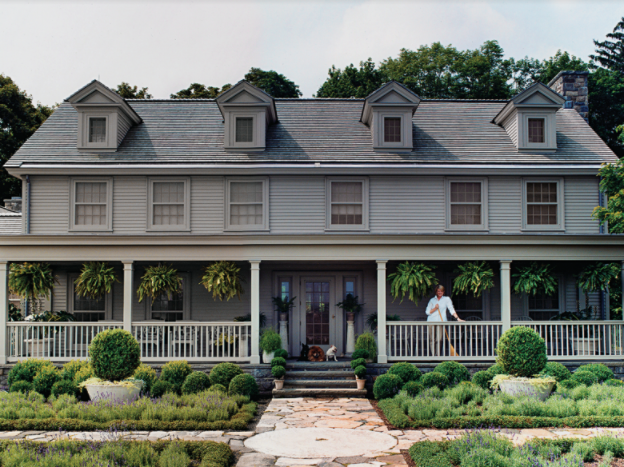 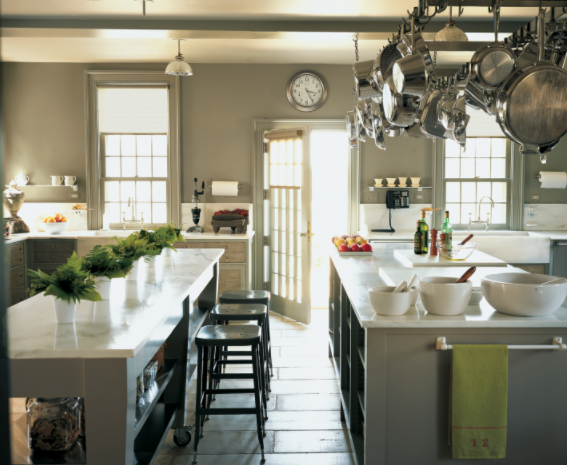 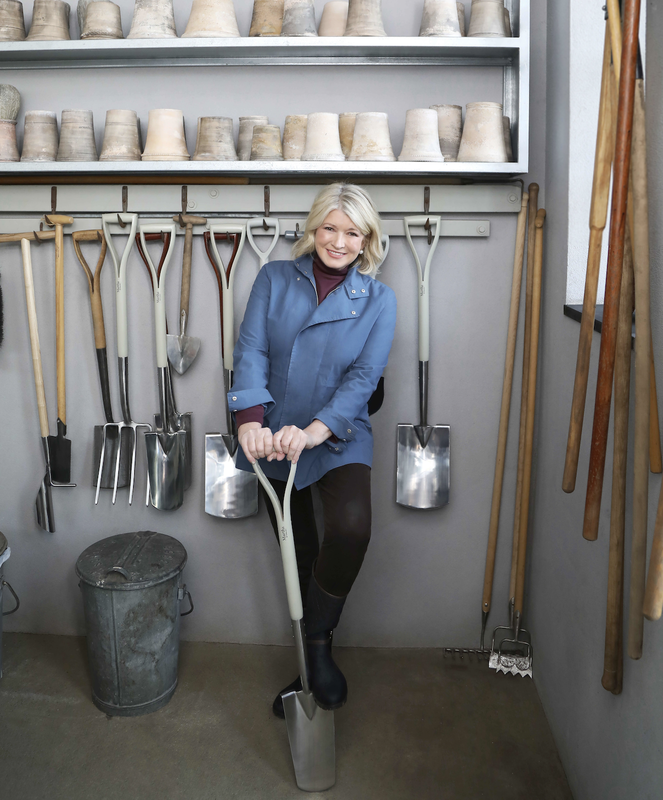 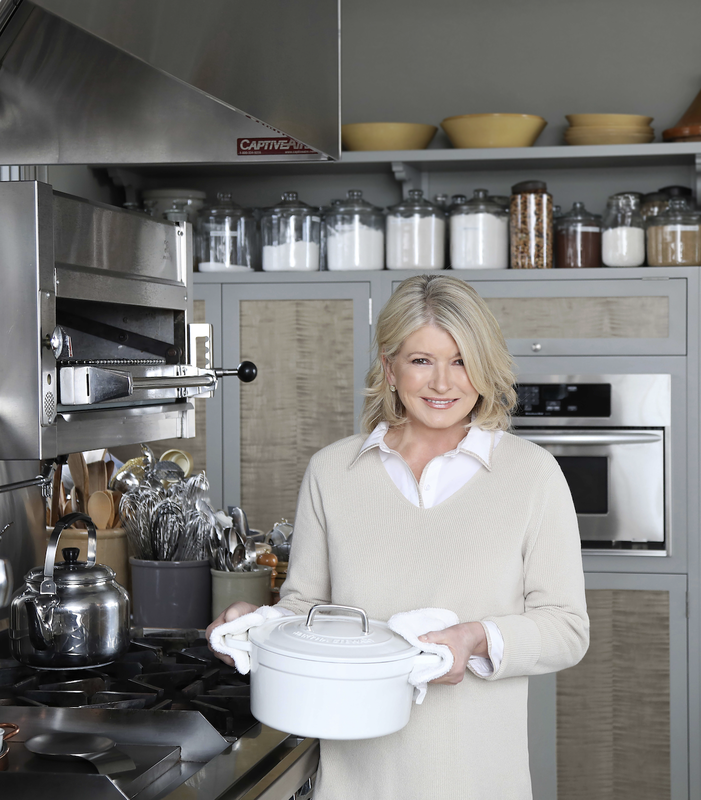 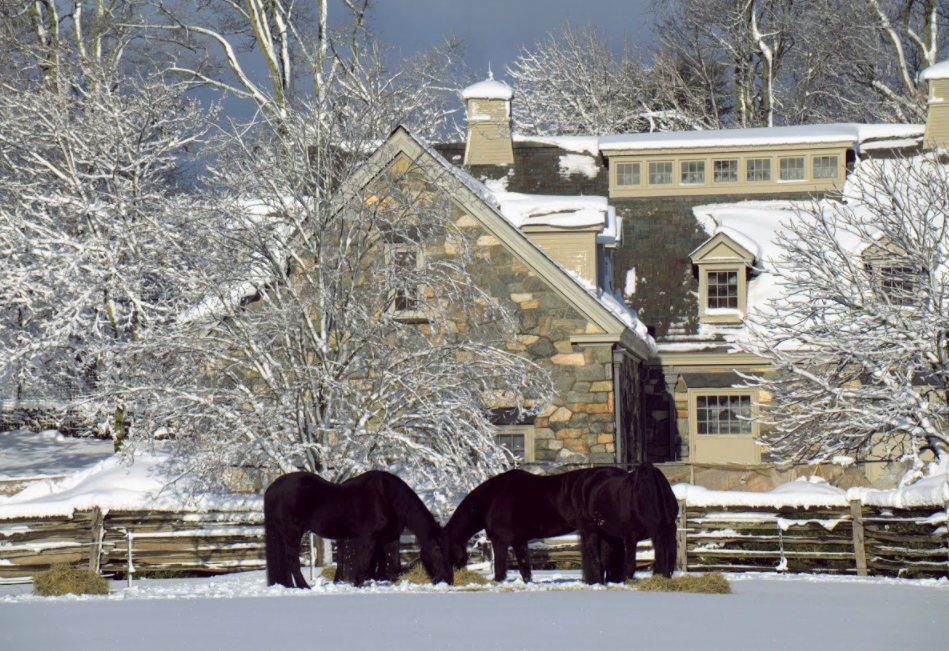