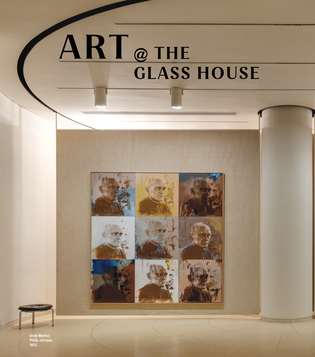 Most in the area are familiar with the gem that is The Glass House; Philip Johnson’s modernist landmark residence gracing the New Canaan landscape. Few, however, may be aware of the treasures buried deep, quite literally, beneath the bucolic compound. 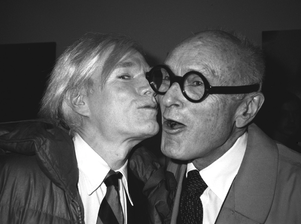 Over a period of forty plus years, Johnson acquired a massive paintings and sculpture collection with the assistance of life partner and artworld insider David Whitney. Whitney worked at MoMA, Green Gallery, Leo Castelli gallery, (the noted art dealer who launched and established the illustrious careers of Robert Rauschenberg, Jasper Johns, Frank Stella, among others),

was a studio assistant to Jasper Johns, held curatorial positions at several distinguished institutions including theWhitney Museum of Art (no relation to the name) and even ran his own gallery. As a champion of contemporary art, he had a knack for recognizing emerging talent and his keen eye and knowledge informed Johnson’s collecting. And on a personal level, Whitney’s close relationships and friendships made their way into the Johnson/Whitney creative partnership. The Glass House became a contemporary salon of sorts, with Andy Warhol, Robert Rauschenberg, Cy Twombly, Jasper Johns, Brice Marden, Merce Cunningham, John Cage, among other talents, spending many a weekend discussing artistic thoughts, processes, music, dance, etc. Oh, to have been a fly on that wall….or an art student…or art collector…or society columnist…

Whitney’s role as art advisor to Johnson cannot be understated. Johnson is notably quoted as saying: “David is my contemporary art. I don’t pretend to have an original eye.”  Thirty-three years younger than Johnson, Whitney brought a fresh perspective to the architect.   During their forty-five years together, they amassed a collection of over two thousand paintings, drawings and sculpture.  Most of the works were donated to MoMA during Johnson’s lifetime, a move that shaped and cemented the Museum’s Post-War collection.  Fortunately, art enthusiasts in our area don’t have to trek to Midtown, as several dozen significant artworks remain on the 49-acre property for all to delight. 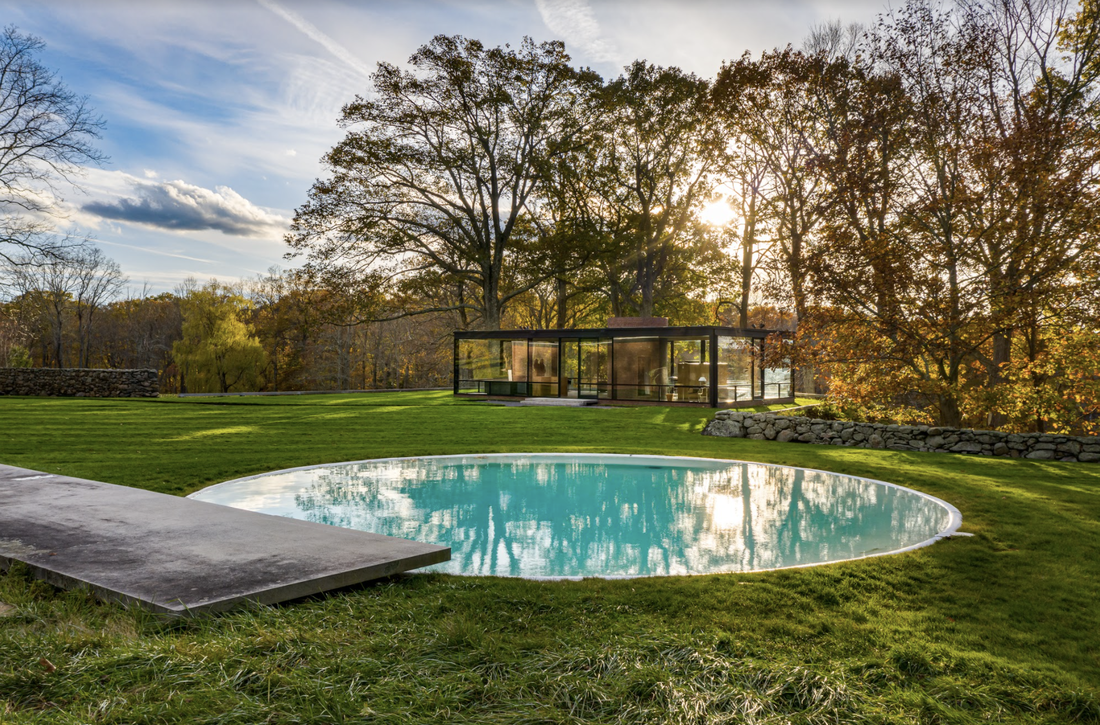 In 1965 Johnson designed and built the Painting Gallery to exhibit and store the growing collection. More suitable to hang art than the transparent Glass Home allows, the building is a climate-controlled bunker-like structure, pressed into the earth, looking more like an ancient crypt 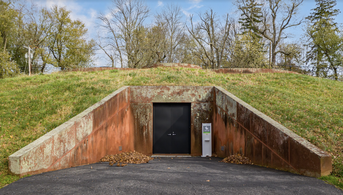 than a traditional art gallery. A vestibule leads to an open rotunda, where six expansive walls display monumental works alongside smaller ones. What lies hidden behind these carpeted walls (a practical surface masking installation marks from swapping works out) are three round chambers acting as oversized carrousels. Each contains racks holding an impressive collection of oversized and smaller-scaled works. In all, there are forty-two panels – with six on display in the gallery. This brilliant movable storage system ensures the art can safely be viewed and switched with minimized risk. 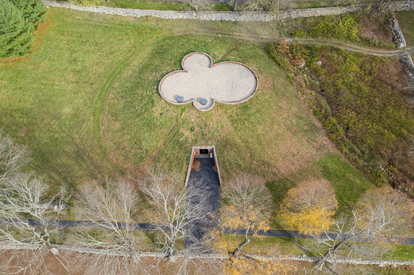 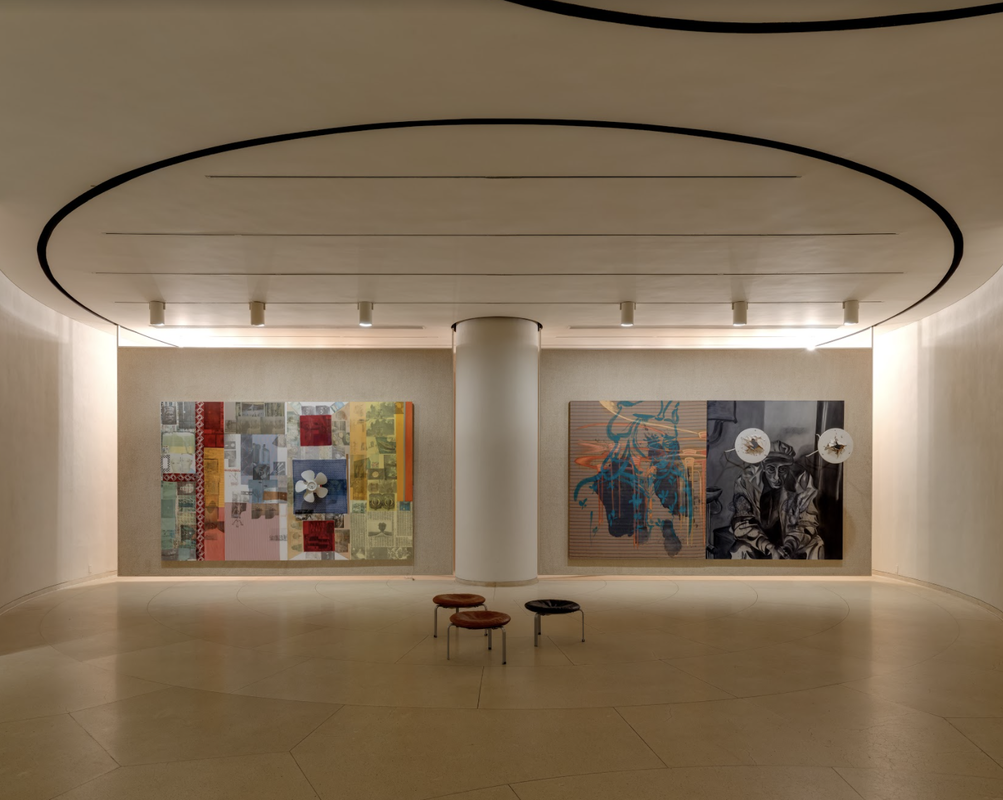 Behind one such rotating wall is Robert Rauschenberg’s Recital from 1980. This work belongs to the Spread series, a grouping that references earlier Combines, (the Cardboards, Hoarfrosts, and Jammers), bringing together the artist’s famed motifs, techniques and materials. The impetus for the creation of this series was a mid-career retrospective held at the Smithsonian American Art Museum in Washington, D.C. in 1976. In preparing for this exhibition, Rauschenberg re-visited works he had not seen in twenty-five years, an exercise that was to take him on an eight-year trip down memory lane (1975-1983.) His newly found inspiration translated to oversized autobiographical panels: the solvent transferred media images mixed with brighter blocks of fabric and assembled with found objects (in this case the working fan) reflect his then current life in Captiva Island. Recital was not the first Rauschenberg Philip Johnson owned. He acquired the Combine First Landing Jump years earlier and donated it to MoMA, making it the first Rauschenberg to enter the museum’s collection.

Every so often works like Recital, usually hidden in the racks, make their way to the outer walls in the gallery, or are loaned out to exhibitions in other locations. In the gallery, large work by David Salle and Frank Stella can be mixed with personalized smaller works by Jasper Johns. Andy Warlhol’s Philip Johnson, 1972, serially portraying the celebrated architect on nine panels is a reminder of whose domain we are in. Additionally, The Glass House holds special exhibitions, such as Enoc Perez revisiting Philip Johnson’s Lipstick building in 2015. These shows revitalize the collection and re-contextualize the dialogue between the architect and contemporary artists. 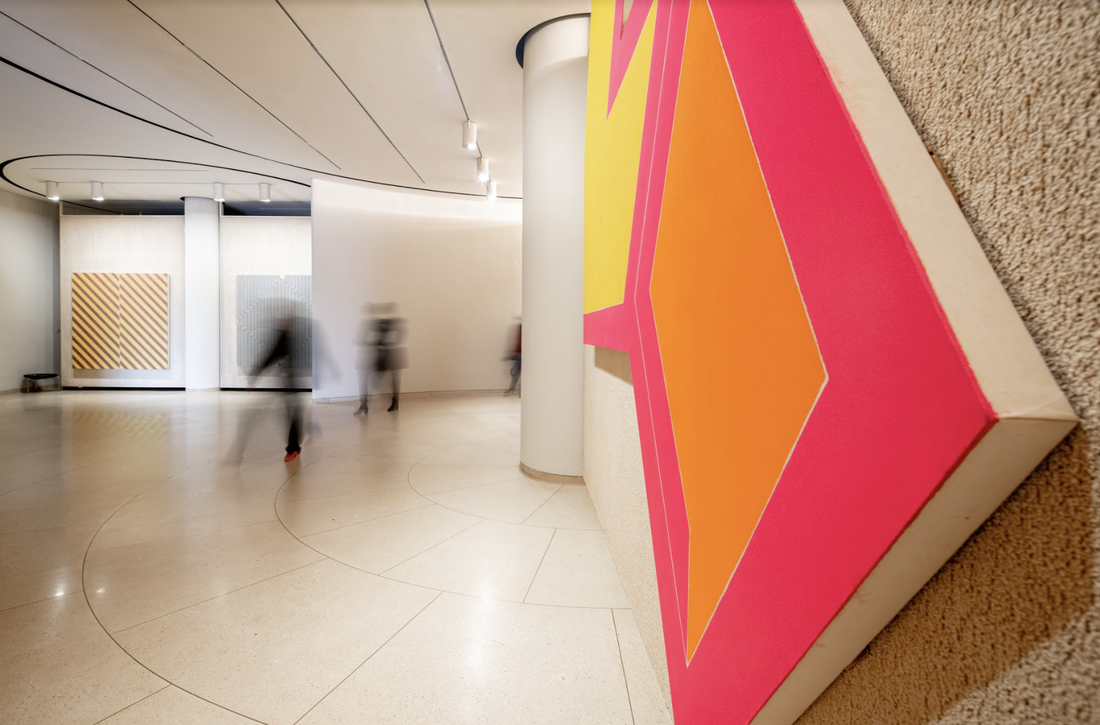 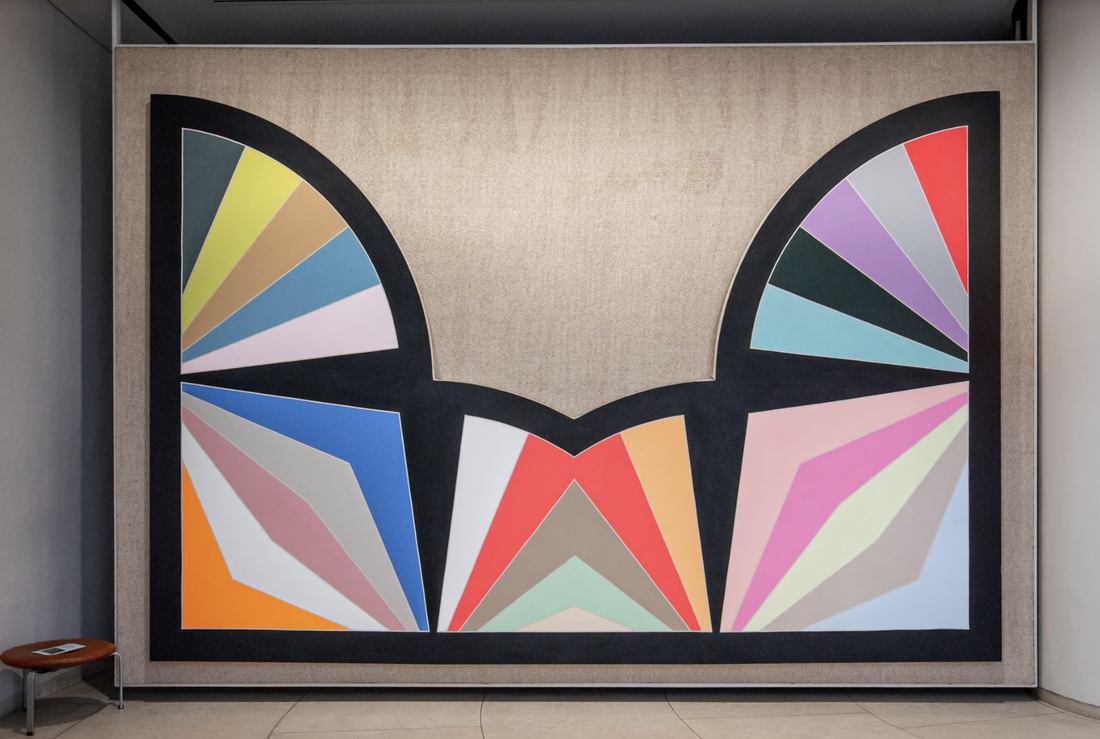 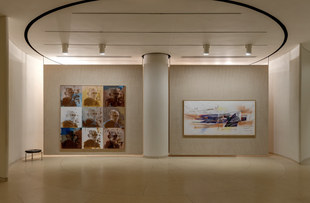 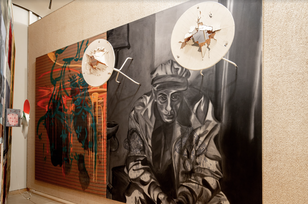 A more astute, if not cerebral, installation is Frank Stella’s pin-striped silver Averroes, 1960, one of the artist’s first shaped canvases.  Situated on the back wall, the painting is the first work visible when opening the gallery doors. Stella famously stated the Minimalist credo, “What you see is what you see” and that is exactly what this is.  Averroes was the first artwork Whitney advised Johnson to acquire when they saw it hanging in the Four Seasons restaurant.  Today, The Glass House has sixteen works by Stella, dating from 1960 to 2004, ranging from smaller works to larger paintings and sculptures.  The artist’s development from rigidly painted canvases to additive wall-mounted reliefs, sculptures, structures and maquettes were to become an influence in Johnson’s architecture, most notably in Da Monsta, 1995, the last structure built on the property. 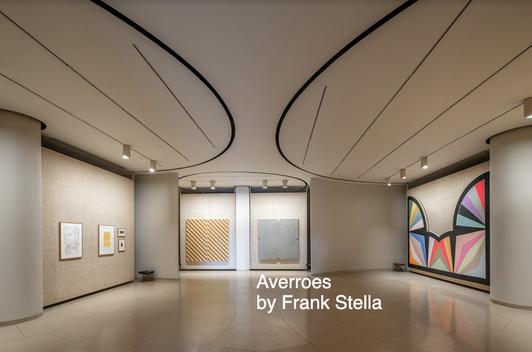 Moving on to the Sculpture Gallery, built in 1970, an angular, skylit building, which functions as just that, a place to view sculpture. Safety codes prevent the visitor from venturing down the rail-less steps, but the top level affords a good view of Stella’s Raft of the Medusa, Part I, 1990, and Robert 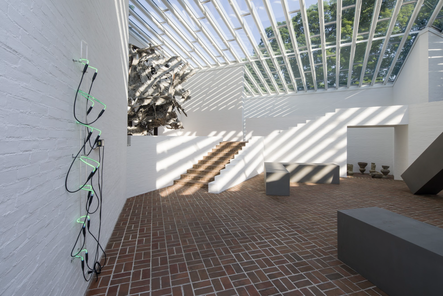 Morris’ L-Beams (1965-70). Be not dismissive of the less impressively scaled Neon Templates of the Left Half of My Body Taken at Ten Inch Intervals, 1966, by Bruce Nauman. This is arguably The Glass House’s most important work in the collection, a neon wall-mounted sculpture that reveals the artist’s preoccupation with his own body as medium and subject matter. Whitney organized Nauman’s first solo exhibition at Leo Castelli gallery back in 1966, a show that launched the artist’s career and took him onto the international museum stage. This work has been exhibited in over 45 national and international venues ever since.

Johnson and Whitney were great visionaries and patrons of the arts, bequeathing the vast majority of their collections to MoMA, the Menil Collection and other institutions. But what lies below at The Glass House – in the Painting Gallery – remains itself an important museum of modern art. 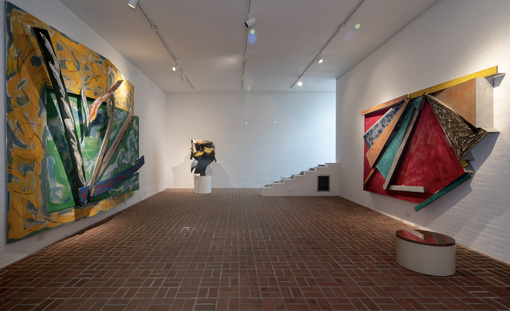 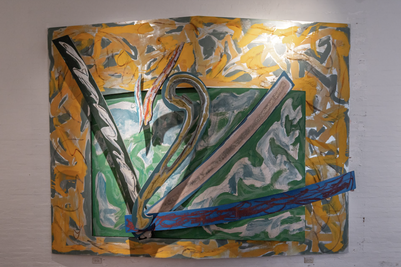 …Down the rail-less steps in the Sculpture Gallery, beyond the Nauman, and turning back under the top level viewing area…there’s an underground gallery, housing additional works, that has never been open to the public.

Buried treasure! Completely hidden from public view, are Stella’s Grajau I, 1975, from the artist’s Brazilian series, New Caledonian Lorikeet, 1977, from the artist’s Exotic Birds series and (currently out on loan) Khar Pidda, 1978, from Stella’s Indian Birds series. H.A.W.K., the salvaged assemblage from 1959, by John Chamberlain, is the only work not reliant on a wall for placement.