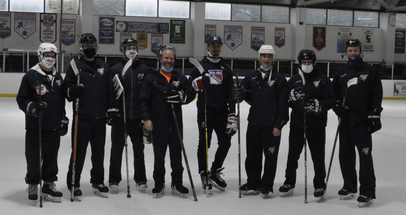 Marc is a big-league sports agent, who played hockey at Denison. Marc and his wife, Joanne, raised their kids Sean and Julia in New Canaan. Marc did his time as a Hockey Dad, with Sean playing organized hockey in New Canaan, and then at Millbrook and Trinity. Marc runs Entersport, which has a 30+ year track record representing professional athletes in America and Europe in all facets of their development, draft, contract negotiation, management and marketing. Marc has represented over 100 NBA players, including dozens of first and second round draft picks, and five Hall of Famers, including Vlade Divac and Dino Radja. Marc is widely recognized for bringing the first wave of international players to the NBA, starting in 1989, forever changing the League. 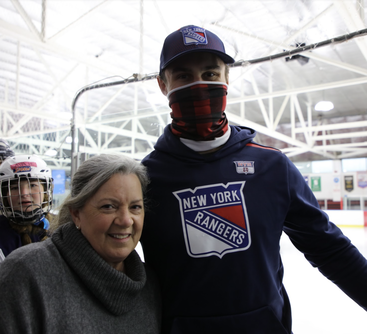 Debbie McQuilkin grew up in Lakewood, Washington, the daughter of a commercial fisherman. “Sometimes there was lots to eat, sometimes not so much.” A roommate in Spokane introduced her to her husband, Kevin McQuilkin, and the young couple moved East in ’87, married in ’88, and moved to New Canaan in 1990. Their first house in New Canaan was on Millport Road,

then a decade in a bigger house on Ponus Ridge, before they ‘bought the farm’ in 2011 – They’re the folks who own the Abby Normal Farm on Oenoke Ridge – the Federalist red brick mansion with the great red barns and the alpacas. Their four kids, Colin (’89), Austin (’92), Kieran (’93), and Molly (’97), all started in the New Canaan public schools and then went to King Low Heywood. Colin went on to Kevin’s alma mater Gonzaga, Austin to Loyola Maryland, Kieran to Washington & Lee, and Molly is currently a senior at Gonzaga.

All three McQuilkin boys played hockey at the Winter Club, and Colin and Kieran played for King…while Debbie played the dutiful ‘hockey mom’. She was managing a team at the Winter Club in New Canaan in 2006, when she filled a garage with used hockey equipment from a charity drive. A round of calls led her to the American Special Hockey Association’s then President, Mike Hickey, who suggested Debbie use the equipment to start a team within ASHA. Debbie told Hickey “But I don’t have a child with a disability”; Hickey responded saying “Right, if you did you wouldn’t have time to run one of these teams”, and; Debbie, on that first call, and immediately impacted by Hickey’s point, determined “OK, I’ll do it!”

“I knew I needed someone to actually run the hockey, so my first call was to John Corcoran, who played pro hockey in Sweden and who I knew as a hockey dad around town. That first Summer in 2006: we got ice for a couple of weeks in Darien; we had 6 kids, who we put in the equipment from the Winter Club charity drive and some other borrowed stuff; we had a couple of coaches, and; my boys helped out. It was magical for sure! The next step was to find ice for a regular season, and the rinks in Darien and Stamford couldn’t find time that would work for our kids. John and Mike Ferguson, who run Wonderland of Ice in Bridgeport, right away allocated our coveted Sunday afternoon ice time, and we ran a program with 10 kids in 2007. That grew to 15 in 2008, and 30 in 2009, and now we’re stabilized at around 60 kids playing every year.” 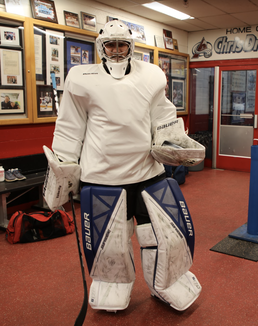 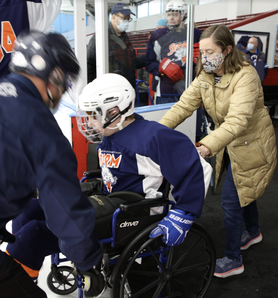 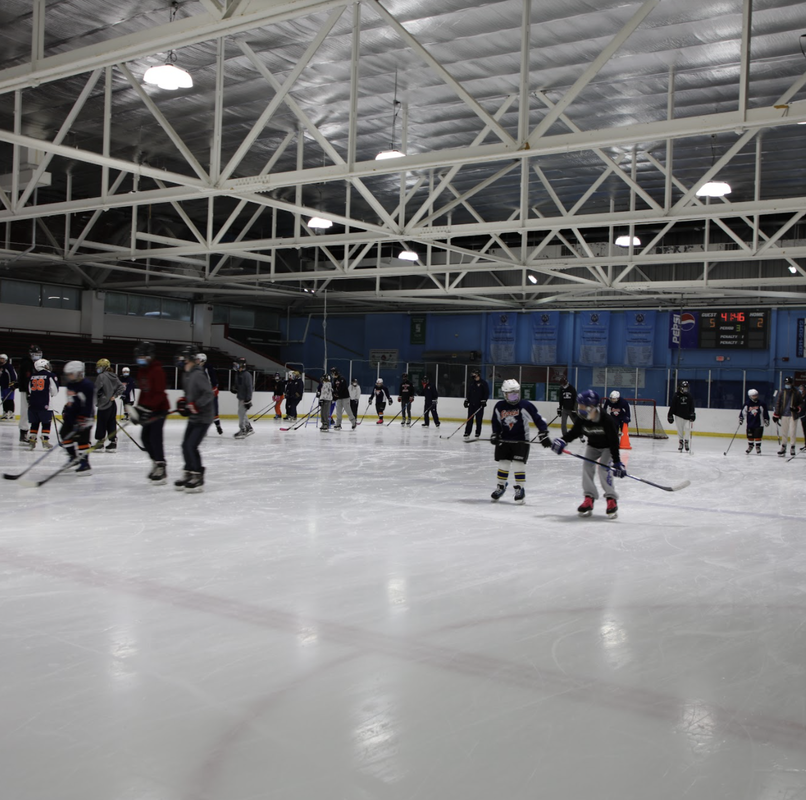 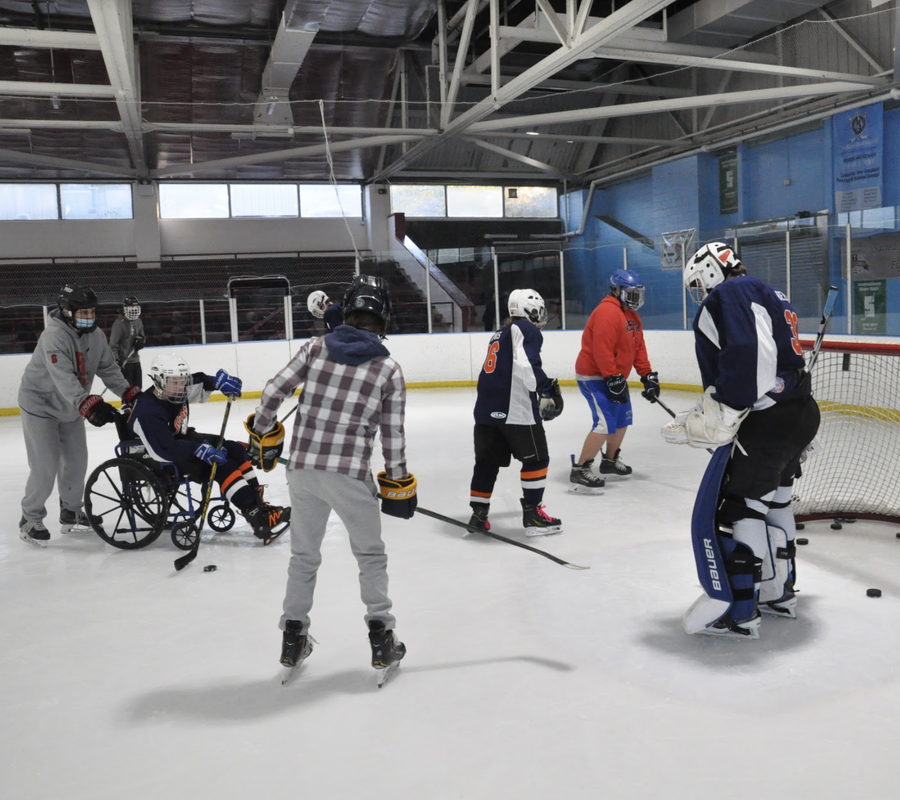 “Our whole thing is ‘Life Skills Through Ice Hockey’. Our application asks only: ‘Please provide a short description of your athlete’s disability – this will only be used by our coaching team to better connect with your athlete’. Mostly we have kids with autism, including all ranges on the spectrum. We have a lot of kids with Down Syndrome. Several kids with severe physical challenges. And a few kids with severe ADHD – they sometimes move on to play on a typical team. We have kids from all over Fairfield county and upper Westchester. We break the kids into two groups, so we can accommodate those who are struggling to skate or who have trouble following instructions in the group that starts every Sunday at 3:30, and then have a group of more advanced skaters and bigger kids in the group that goes at 4:30.”

The size and quality of the program is impressive! Many kids stay on for multiple seasons, but Debbie estimates there may now be about 500 Storm alum! John Corcoran runs

The Storm’s 9 person coaching staff (as a tribute to how rewarding the experience is, everyone who has tried coaching is still on the staff). Then, John McCormack runs our mentoring program – mentors are assigned one-on-one to a different player each week. There’s 90 mentors, who are hockey players from local high schools and colleges, many of whom work for several years and beyond the requirement for a resume entry. Debbie estimates that by now The Storm has involved over 1,000 mentors! 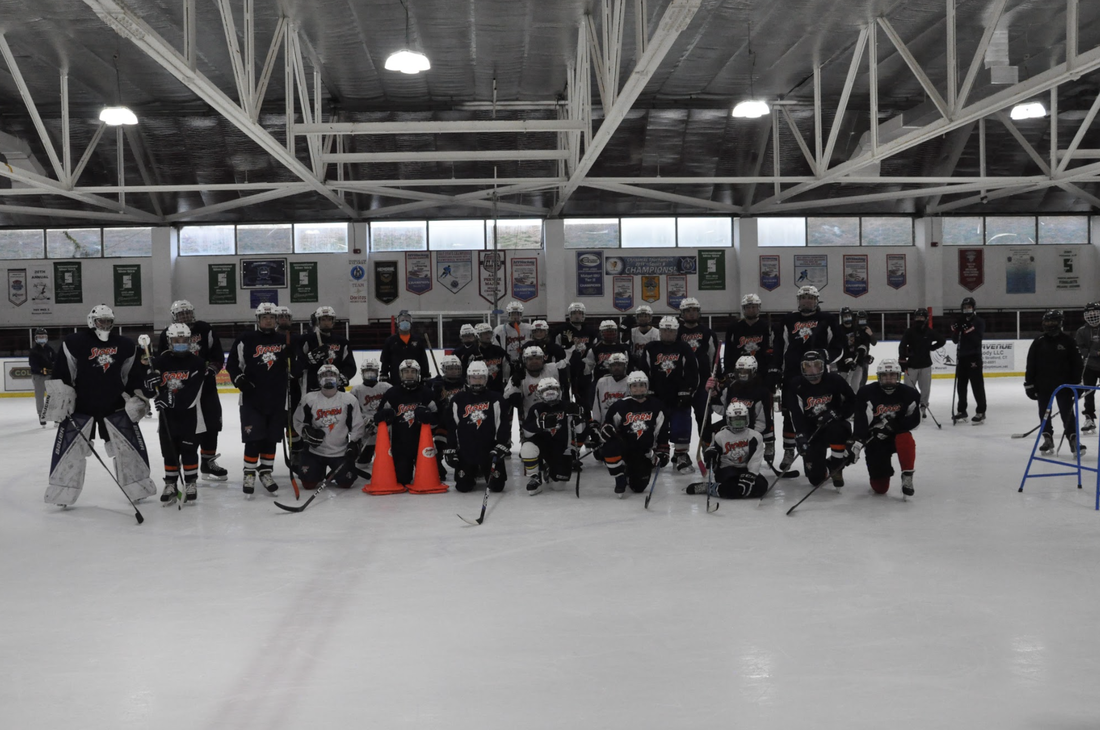 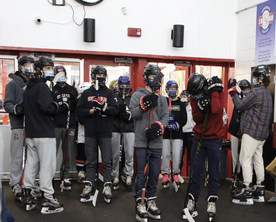 “For some of our kids, this will be the first time in their life they will play on a team or wear a team jersey with their own name on it. For many it’s the only organized sports team they have tried and a chance to be around other kids like them. Trying something new can be scary, but these kids rise to the occasion! I can’t tell you how many parents say to me ‘Until now, my child would watch hockey, now he gets to play! Kids get on the ice and relax, have fun, make friends, learn skills and make real physical strides!  It’s life changing. It makes them feel good about themselves and their many achievements. We play other teams in the area and throw a pizza party after each home game. The kids learn a lot of important social and basic life skills that we take for granted, and they build lifelong friendships.”

“We go on trips to play away games as well, like against the Raptors in Mamaroneck, but we’ve also had trips to places like Albany, Buffalo, Lake Placid and Maryland. We get buses, and everyone who wants to go and participate, can go. We try to keep the hockey – and the whole experience – as typical as we’re able. Players take ‘shifts’ in ‘lines’ and spend the rest of the time on the ‘bench’, but we don’t have ‘icing’ or ‘offside’, as those are difficult concepts for a lot of our kids. All the teams and coaches are basically in the same mind set and do their best to match opposing player capabilities, and allow players of every level to have some role in the competition. The kids talk about these trips all year long.” 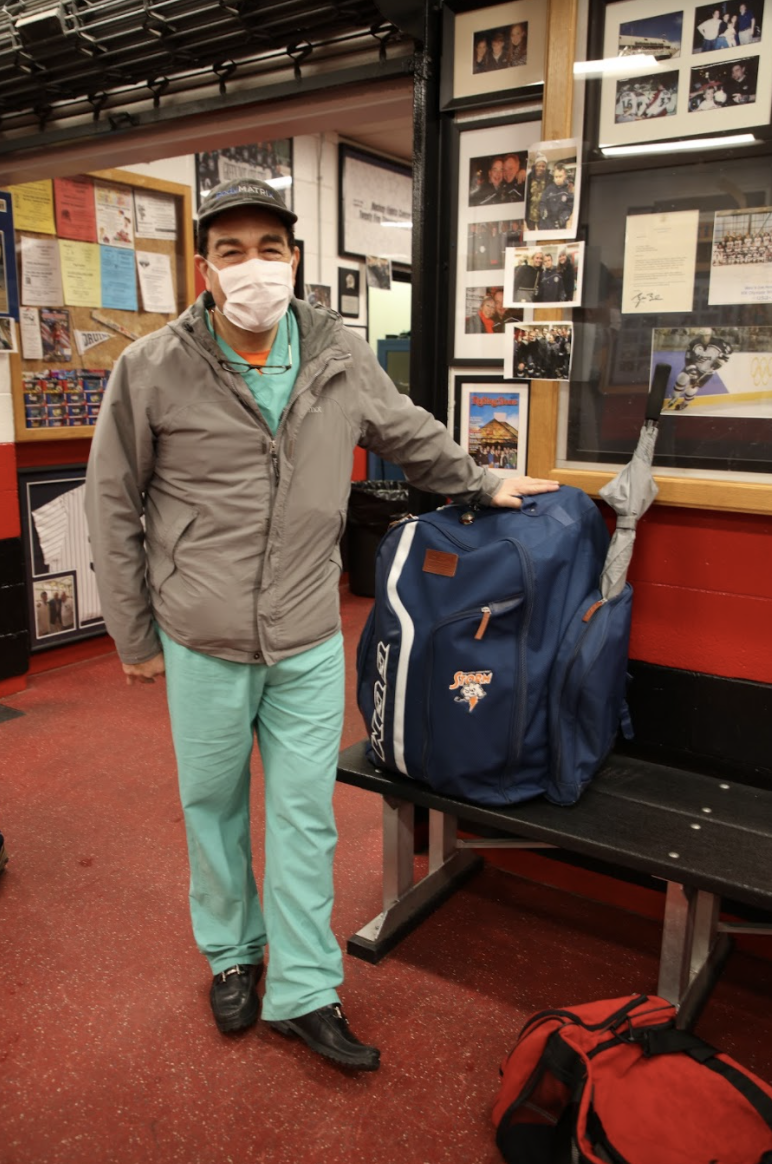 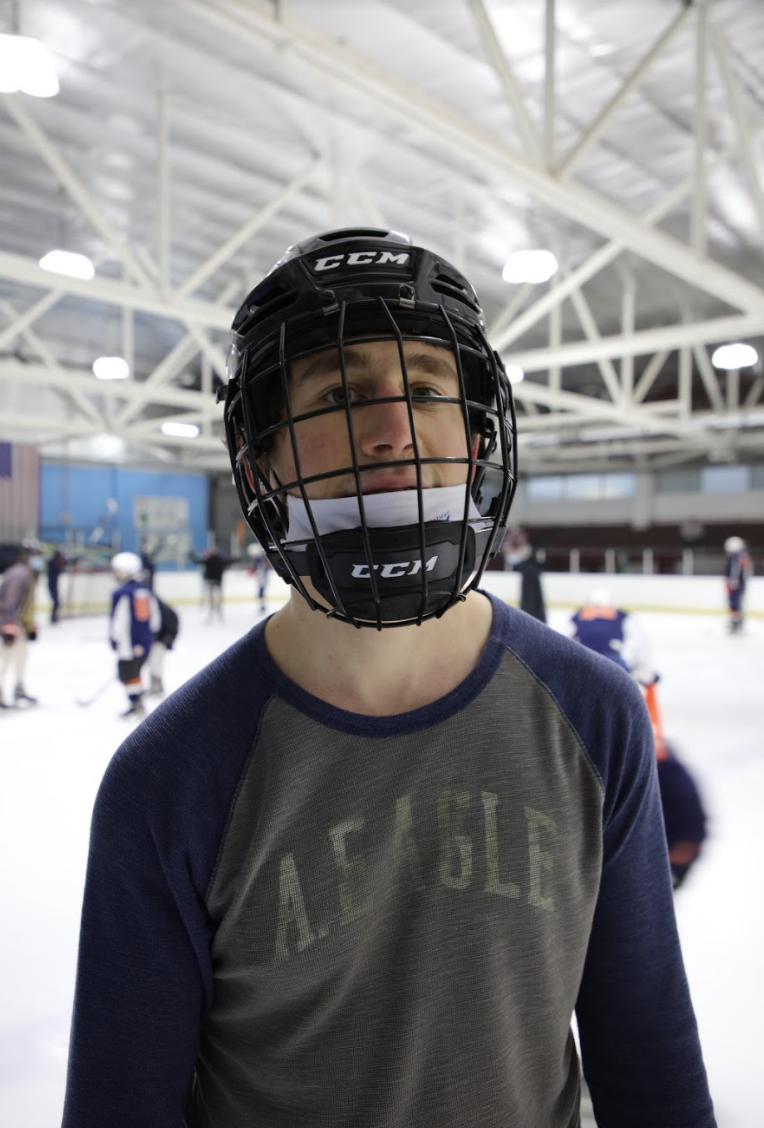 ​“Sam’s been with The Storm for 9 years, the first 6 as a player, and now as a mentor. He processes slowly, but he’s really determined. He likes to be around for his brother, Mikey, who has Ataxia and can hardly walk and struggles to stay up on his skates, but who is sharp as a whip. They love being able to do this together. The Storm has been a blessing for us! It’s the highlight of the week for my boys and, in different ways, has been critical for each of them.” 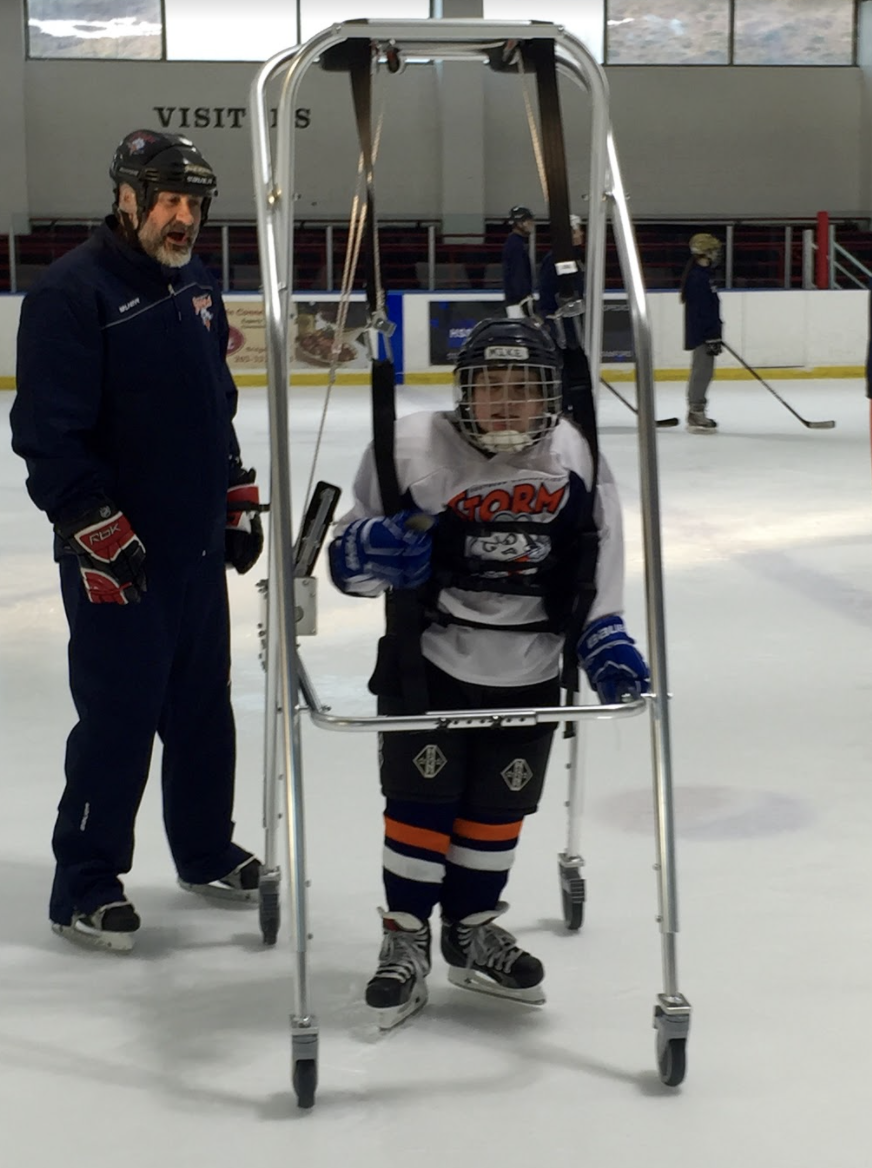 The Storm has an expensive piece of equipment called a Kaye Trainer, which holds an athlete in a sling over the ice and allows as much gravitational pressure to be placed on the legs as desired. That’s ‘Sweaty’ Mike Bluestein getting out on the ice in “The K”.

​There’s a $400 admission fee, but scholarship is generously available. Remarkably, The Storm provides the helmets, pads and all other equipment required for every athlete that needs it. They furnish the skates in conjunction with Ferguson’s at Wonderland of Ice, who handles the storage and fittings. (Unusually, The Storm prefers used skates over new, as they tend to be more comfortable.) Debbie amalgamates donated equipment and buys whatever else is necessary, and keeps the equipment inventory in a storage unit on Route 7. Every athlete gets a shell that goes over their own pants, and a jersey with their own name on the back. “I hear from lots of parents that their kids got their first Storm jersey and didn’t take it off for two weeks”, Debbie said, “it’s their pride and joy.” Each athlete gets an equipment bag, and about that Debbie declares, “That’s one of my only rules. Every kid has to pull his own bag.” There are occasional goodies like a team beach towel or hat, and everybody gets a trophy. “The trophies are really important. It’s a symbol of their accomplishment and makes them feel like a winner. The bigger the better. With their name on it.” 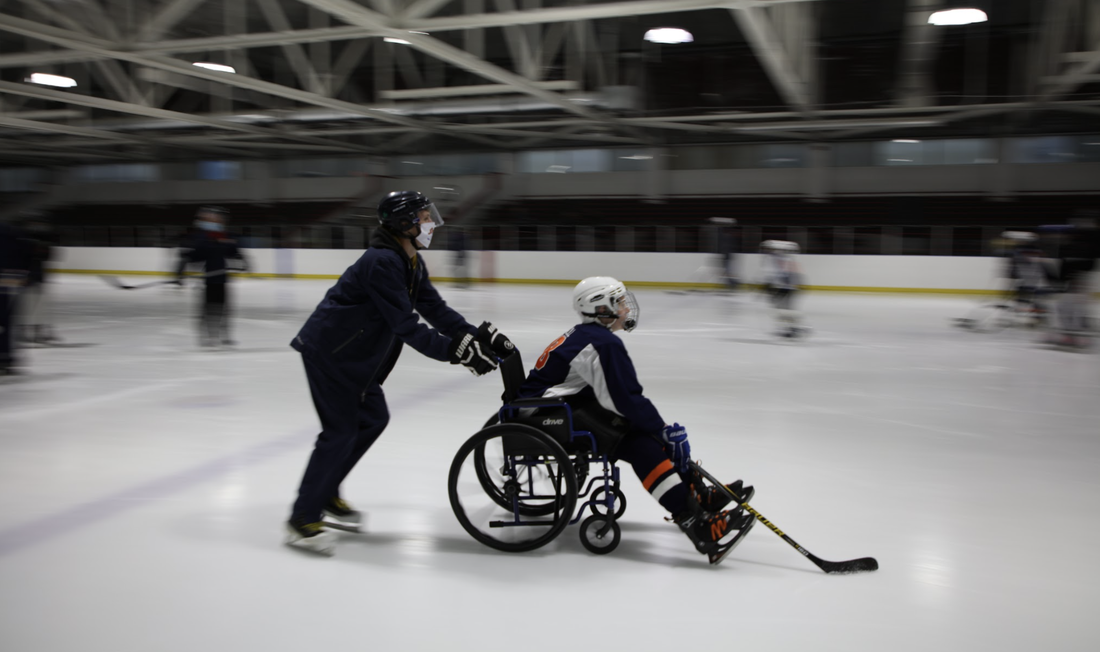 ​But all this doesn’t come cheap, and The Storm needs to raise about $25,000 a year to make ends meet. For years, New Canaan resident Boyd Hardin held an annual golf outing at the Country Club of New Canaan, with the proceeds going to The Storm, but that ended in 2019. Debbie is not shy about fundraising, parents solicit contributions, and Board Members, including John Corcoran, Jeff Engborg and New Canaan resident Terry Connors, do what they can to raise funds.

Still, donations are required to keep what is formally known as Southern Connecticut Storm Special Hockey, a 501(c)(3), alive and flourishing.

As important, having established The Storm as an institution, Debbie is looking to retire as President, Program Director and the force behind The Storm, and for someone new to take the helm. It may take a new hockey super-mom, or it may take a small committee of dedicated volunteers, but Debbie feels it’s time to transition to new leadership.

Debbie talks about her 15 years of dedicated hard work on The Storm as though she was the one ‘getting’ all that time. She says, “I feel like I’ve got 60 kids in addition to my own, like I’ve been the hockey mom to each one of them, and shared in the reward of each of their successes”. She has a special humility and grace, and a calm smile that hides the thousands of details she has to bring together to produce The Storm each week and each year. She only directs attention to the Board Members, coaches, mentors and others who’ve helped her make it happen. And Debbie’s husband, Kevin, who has carried a lot of bags of equipment, and showed up just about every Sunday to help out, and chaperoned on all the trips…and kicked-in the bucks to fill the gaps – he says, “It’s one of the best experiences I’ve ever had. Just being around what’s happening out there on the ice makes you feel good. These kids are really inspiring.” ​​ 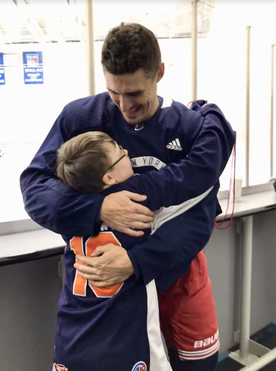 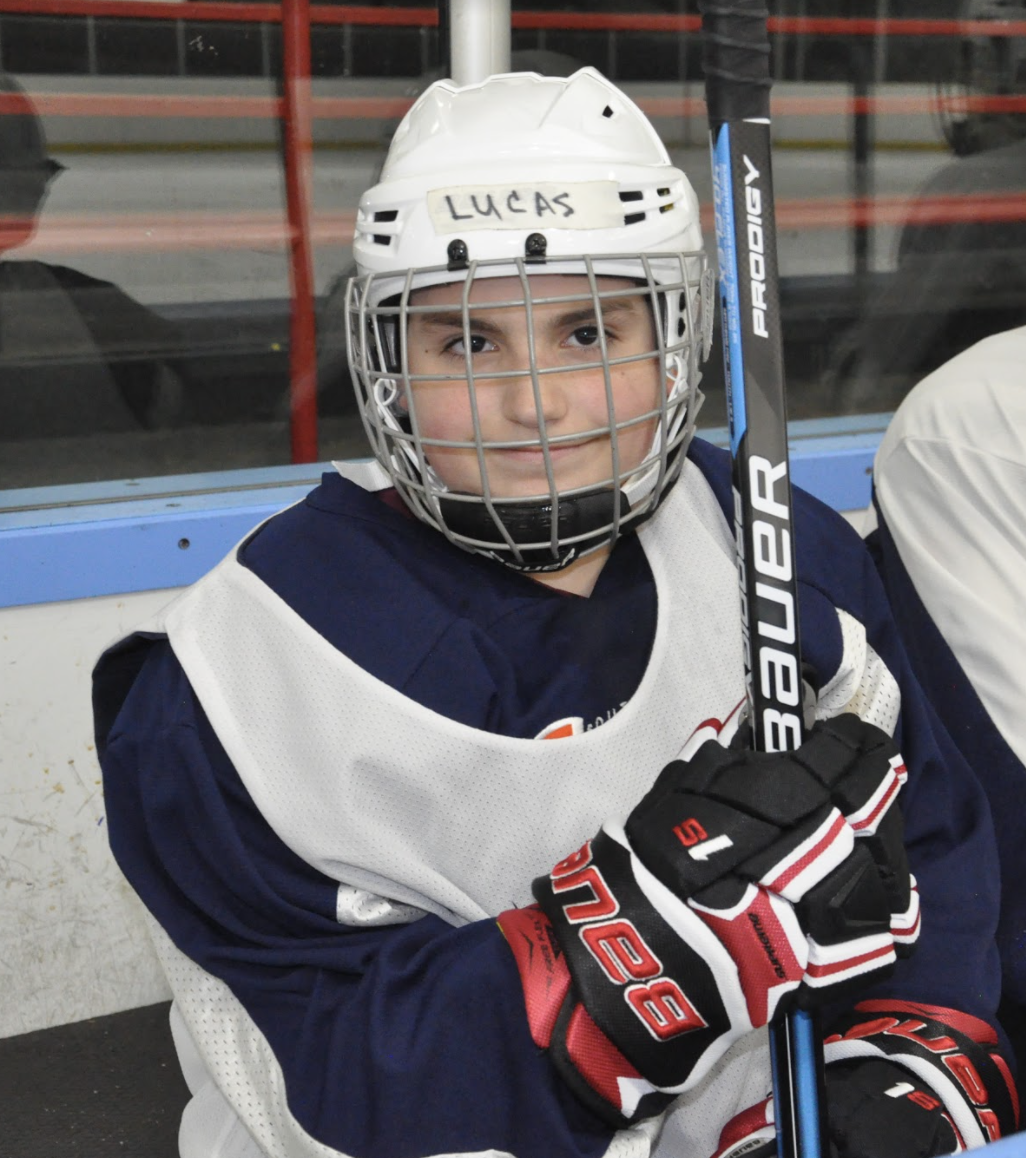