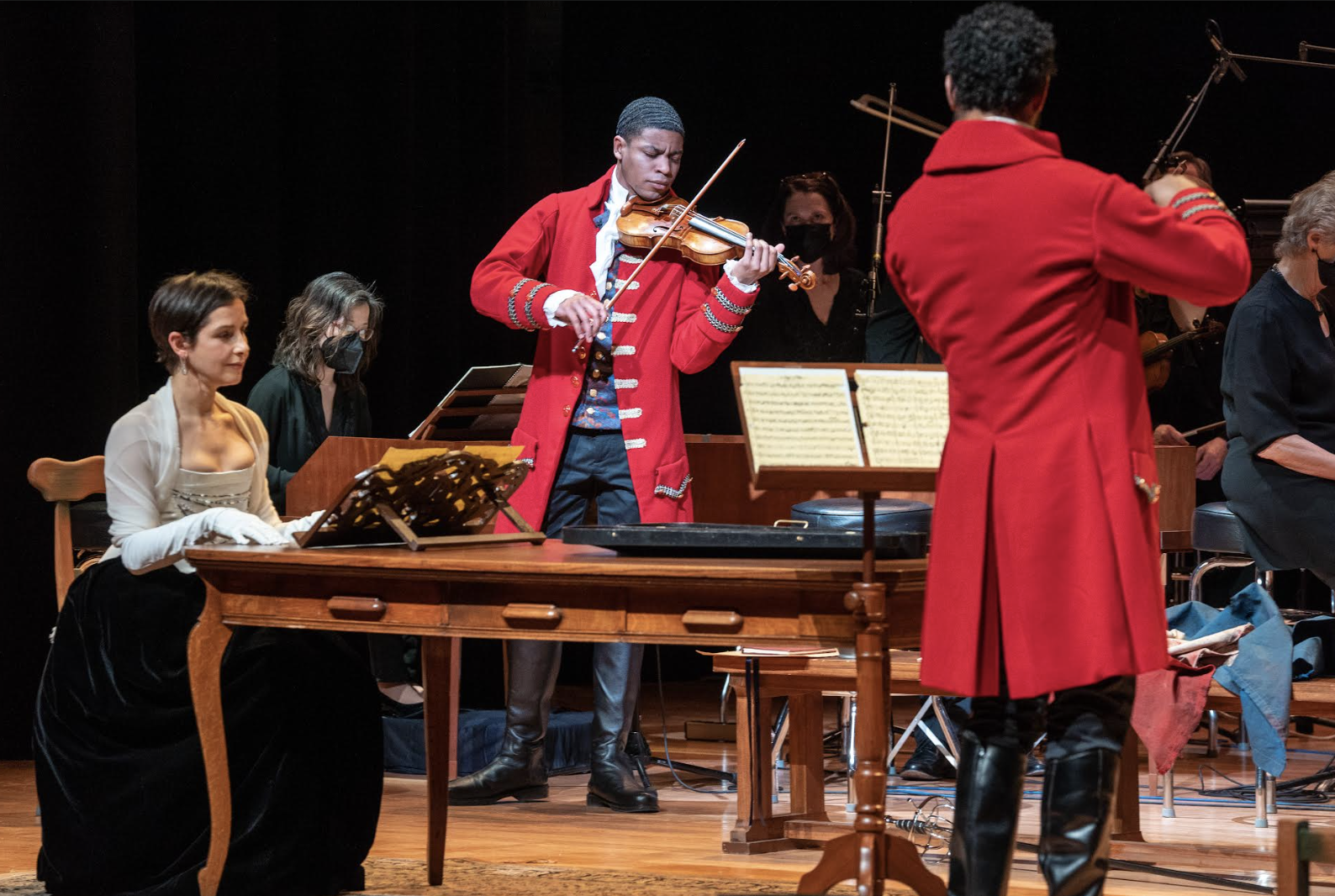 This Sunday, July 10, at 4pm in the Venetian Theater, Caramoor will present a Concert Theater Work about Joseph Bologne, Chevalier de Saint-Georges.

This Sunday, July 10th, Caramoor will present a very special concert theater work by Bill Barclay about a little known, but prolific, 18th century man named Joseph Bologne – aka the Chevalier de Saint-Georges, who was not only a composer and virtuoso violinist but also an abolitionist, general of Europe’s first Black regiment, acquaintance of both Mozart and Marie Antoinette and, “don’t order yet”: the finest fencer in Europe, whose story has been forgotten by history.

Bill Barclay brings Bologne’s remarkable story to life in a play with orchestra, interweaving scenes between the actors with music excerpts and blending Bologne’s compositions with his fascinating history. In fact, the title character will simultaneously be played by two people: actor RJ Foster and violinist Brendon Elliott. Barclay chose to divide the role to convey the immense breadth of Bologne’s accomplishments as a conductor, composer, violinist, activist, and swordsman.

The Chevalier is one of the linchpins of Caramoor’s 2022 summer season, which celebrates music’s power to unite people, heal divisions, and inspire discovery. With performers and composers representing a vast array of backgrounds and lived experiences, the season spotlights many whom systemic forces have historically suppressed, and focuses on music as a collective cultural heritage for the entire world. Bologne is a prime example of one of these underrepresented artists deserving greater recognition, and The Chevalier is a demonstration of Caramoor’s ongoing commitment to diversity, equity and inclusion as a core operating practice.

Barclay says: “We are so thrilled to tread the boards at this summer’s Caramoor festival and to bring Bologne’s neglected story and music to one of New York’s most iconic and exciting outdoor stages. Performing The Chevalier with the Harlem Chamber Players will be a particular thrill as they have long advocated for highlighting marginalized voices and programming composers of color. Concert Theatre Works commends Caramoor for their deep commitment to supporting musicians of color. The march for equity goes on.”

This performance of The Chevalier features the Harlem Chamber Players: an ethnically diverse collective of professional musicians dedicated to bringing high-caliber, affordable and accessible live classical music to people in the Harlem community and beyond.

“Caramoor is honored to present Bill Barclay’s brilliant concert theater work, The Chevalier. As we play our part to help expand the canon of classical music, it is our hope that this collaboration with Concert Theatre Works and the Harlem Chamber Players will enlighten our audiences on the important contributions of historic people of color whose artistic works and voices resonate as strongly as ever.”