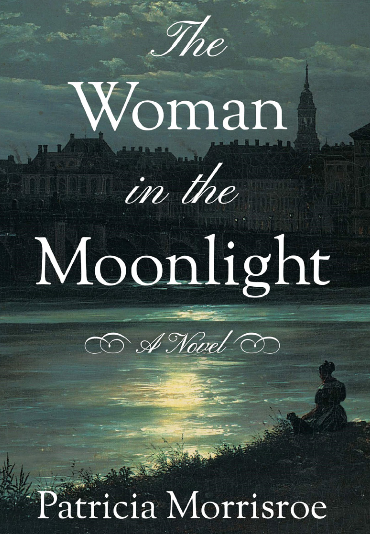 December 16th marks Beethoven’s 250th birthday.  While Covid-19 silenced the many concerts planned for his anniversary year, it hasn’t silenced his music, nor muted his message of endurance and hope.  One hears it very clearly in the 9th Symphony with its rousing “Ode to Joy,” but also in the “Moonlight” Sonata, a work that transitions from a funeral march to a defiant rebirth. Patricia Morrisroe’s novel “The Woman in the Moonlight” is the story of Beethoven’s relationship with Countess Julie Guicciardi, the dedicatee of that sonata.

Countess Guicciardi became Beethoven’s piano student in 1801. She was 19, and so beautiful people referred to her as La Bella Guicciardi.  He was 29, and the foremost piano virtuoso in Vienna.  They met when he was struggling with his hearing loss.  In a letter to a friend, he referred to her as a “dear, enchanting girl” and confessed that they were in love.
Recounting Julie’s first visit to Beethoven’s apartment off the Graben…

Lucy and I climbed three flights to his apartment, where a harried-looking servant answered the door.  I’d never seen such an untidy place, every inch covered with loose papers, haphazardly arranged books, dirty clothes, half-eaten food, and mysterious rolls of cotton steeped in sweet-smelling oil.  The creator of all this chaos was sitting at the pianoforte.  He was so caught up in his playing he didn’t even notice us until a servant tapped him on the shoulder.

Countess Guicciardi is here for her lesson,” she announced.

“I cannot teach with an audience.  Go away!”

“Distractions,” he muttered. “In order to create, one needs order and discipline.”

I thought he might have been joking, but he was serious.  There was nothing ordered or disciplined about anything.  Even his hair stood up in every direction.  He wore it à la Titus, a short, spiky style that had originated in Paris. I noticed that his ears were shiny, as if he had applied oil to them.  He smelled of almonds, the same fragrance I detected on the cotton.

“You’ve been to Frau Streicher’s,” he said.  “She makes an excellent instrument, although I do wish it sounded less like a harp.”

“Like me.” He laughed. “I would like to produce my own tone.  Her pianofortes are too delicate.  I need something capable of withstanding—”

“At times.”
Several months later, Julie encounters Beethoven at a ball given by his foremost patron.  She unintentionally humiliates the composer by asking him to waltz.

During my next lesson, Beethoven was cold to me.  I knew he was embarrassed, and I wanted to ease his concerns. “I don’t much care for dancing myself,” I said.
“Then it’s lucky I’m not giving dancing lessons,” he replied sharply.  “Now shall we begin where we left off – at the pianoforte.”

I’d been lax with my practicing, but after some warm-up scales, I began playing a Clementi sonata but kept hitting wrong notes.

“No, no, no,” he shouted.  “You are playing like a child.  An untalented one at that! I don’t think I can continue to teach you.  You are an impossible girl!”

He tossed the sheet music on the floor, toppled a chair, and threw a pair of candlesticks at the wall.  Moving over to his desk, he sent papers and letters flying before pounding his fists against a nearby windowsill.

“My hands?” He sneered. “You’re worried about my hands?”

“Please tell me what is wrong.”

“Wrong.  You want to know what is wrong?  Then I will tell you.  I am going deaf!  Beethoven, the musical genius, is losing his hearing!”

After a tragic event, Beethoven composes the Piano Sonata No. 14 in C-sharp Minor, later known as the “Moonlight” Sonata.   At her relatives’ Hungarian estate, Julie hears the piece for the first time.

Beethoven began to play the first movement. He had indeed written a song without words: wistful, mournful, hushed.  The rhythm was unrelenting, a funeral march with no ending or beginning.  But then, without pausing, he moved directly into the second movement, creating a light, fetching atmosphere in the form of a scherzo.

If the first movement was nostalgic and contemplative, the third was powerful, defiant, and ferocious in its rapid shifts in volume and pace.  Though the underlying motif was one of profound grief, he answered it with a display of dazzling virtuosity that made it clear that he would rise above his anguish.

Forced to marry a man she doesn’t love – the ballet composer Count Robert Gallenberg – Julie moves with him to Naples.  There she is drawn into the complicated relationship between King Joachim Murat, Napoleon’s valorous (and foppish) brother-in-law, and his politically savvy wife, Caroline Bonaparte.

I was summoned to a mysterious meeting at the Palazzo Reale, where a monumental cream-and-gray marble staircase led to multiple antechambers, the throne room, and finally the royal apartments.  The queen was surveying a new portrait by François Gérard, who had completed a similar commission for her sister-in-law, Empress Josephine.

“It’s called Caroline and Her Children,” she said slyly. “In order to gain power, it’s important to project a maternal image.  Otherwise, I’ll be thought of as that.”  She pointed to the menacing specter of Vesuvius.  “Josephine may be beautiful, but she cannot give my brother a child.  Without heirs, the marriage won’t last.

I waited for the queen to continue.  She couldn’t possibly be asking me to have a child with Napoleon.

“My husband thinks you’re very attractive,” she went on.  “To be honest, he thinks many women are attractive.  Still, he mentioned you several times.  I want you to become his mistress.”

“I mean no disrespect, Your Majesty, but I don’t know what you could gain from this.”

“Knowledge.  “You would be my eyes and ears.”
“I’m afraid I’m not cut out to be a spy,” I said.
“Of course you are.  You live with secrets.”
The queen wasted little time setting up the assignation, and the following week, I had the
pleasure of watching the king’s valet meticulously finger-curl his long damp hair.  When the valet finally created a luxuriant lion’s name, he dressed the king in his military uniform.

“We must make this quick,” the king said, moving over to the bed. “I need to make an offering at the shrine of Saint Januarius.  I want my people to love me.”

After I complimented his elaborate attire, with its feathers, braids, and medals, he confided that he designed his own uniforms.

“Led the cavalry into numerous battles. Nearly avoided death countless times.  Had a Turkish commander fire directly into your mouth?”

“Not the last one, no.”
After realizing I was joking, he threw his head back and laughed, his long curls falling in perfect regimental alignment.”

Even while living in Naples, Julie never forgets Beethoven and when she finally returns to Vienna in 1821, she immediately seeks him out.

I felt something graze my temple.  My hand flew up to my face as woman brushed past me in the doorway.  “Even if you’ve fallen on hard times,” she warned, “don’t become his housekeeper.” Another woman followed.  “And don’t be his cook either.”

“I picked up the flying object, a leather-bound volume of Homer’s Odyssey.  The cover was flecked with candle wax and ringed with coffee stains.

“Is Homer your preferred weapon?” I asked Beethoven. “Or do you alternate with Shakespeare?”

He stared at me through his spectacles.  Deep horizontal lines slashed his high forehead and ran vertically on both sides of his mouth.  He was wearing a navy dressing gown spotted with more candle wax, one foot in a velvet slipper, the other bare.  His big toe was black and blue.

“I kicked the housekeeper,” he explained.  “She was a troglodyte, a hound from hell.

Six years had gone by since we’d seen each other, six years of dreaming and hoping and not once during that time, not once on my worst day, did I picture such a reunion.

“May I come in?” I asked.  When he didn’t respond, I walked into the apartment, which resembled all his previous places in its titanic disorderliness.  I placed the book on the dining table next to an open sketchbook and a plate of half-eaten red herring.

After he convinces Julie to cook him a bowl of his favorite bread soup, she puts on her coat to leave.

We stared at each other as if searching for a way to rekindle the love we’d once felt.  It was so long ago that it felt like swimming against the current back through time.  He reached for my hand.

“I would dearly love to see you again,” he said.

“I looked at his wild hair, windswept even indoors, at his white whiskers, unruly eyebrows, and stained dressing gown.  I glanced down at this feet, one still unshod, and at the dining room table, herring next to the Missa Solemnis.  A voice said, “You are as mad as he is.

Another voice said, “Yes, I would like that too.”

In the winter of 1826, Beethoven is seriously ill.  Julie visits him at his apartment in the House of the Black Spaniards, where his factotum, Anton Schindler, has achieved a position of power by controlling the flow of visitors.

“I thought you had deserted me,” Beethoven said.

“She didn’t want to tire you,” Schindler wrote on a slate.

“Leave us,” Beethoven said, pointing to the door.

Beethoven looked terrible.  Even his normally vibrant eyes had lost their luster, yet he treated his illness as just a temporary distraction.  He had overcome much worse, and nothing stopped him from composing, even deafness.  He pointed to a forty-volume set of Handel’s works that a British admirer had sent him.  “I’ve been studying them,” he said excitedly.  “One can learn much from Handel.”

“It touched me deeply that he still wanted to learn and that despite his conviction that his own work would be eternal, he showed a deep respect for his musical forebears.  I didn’t know how long I had before Schindler returned, so I pulled out the note he’d written me all those years ago.  I watched as he read it.

“You gave me a sonata,” I wrote on the slate.

“It’s not my best, but people will play it forever.

I kissed him lightly on the forehead.

“You will always be my dear, enchanting girl.”  He had tears in his eyes, and then his lids closed and he fell asleep.  I heard Schindler coming up the stairs, so I quickly wiped the slate clean.  If one looked hard enough, the word ‘sonata” lingered in a wisp of chalk.