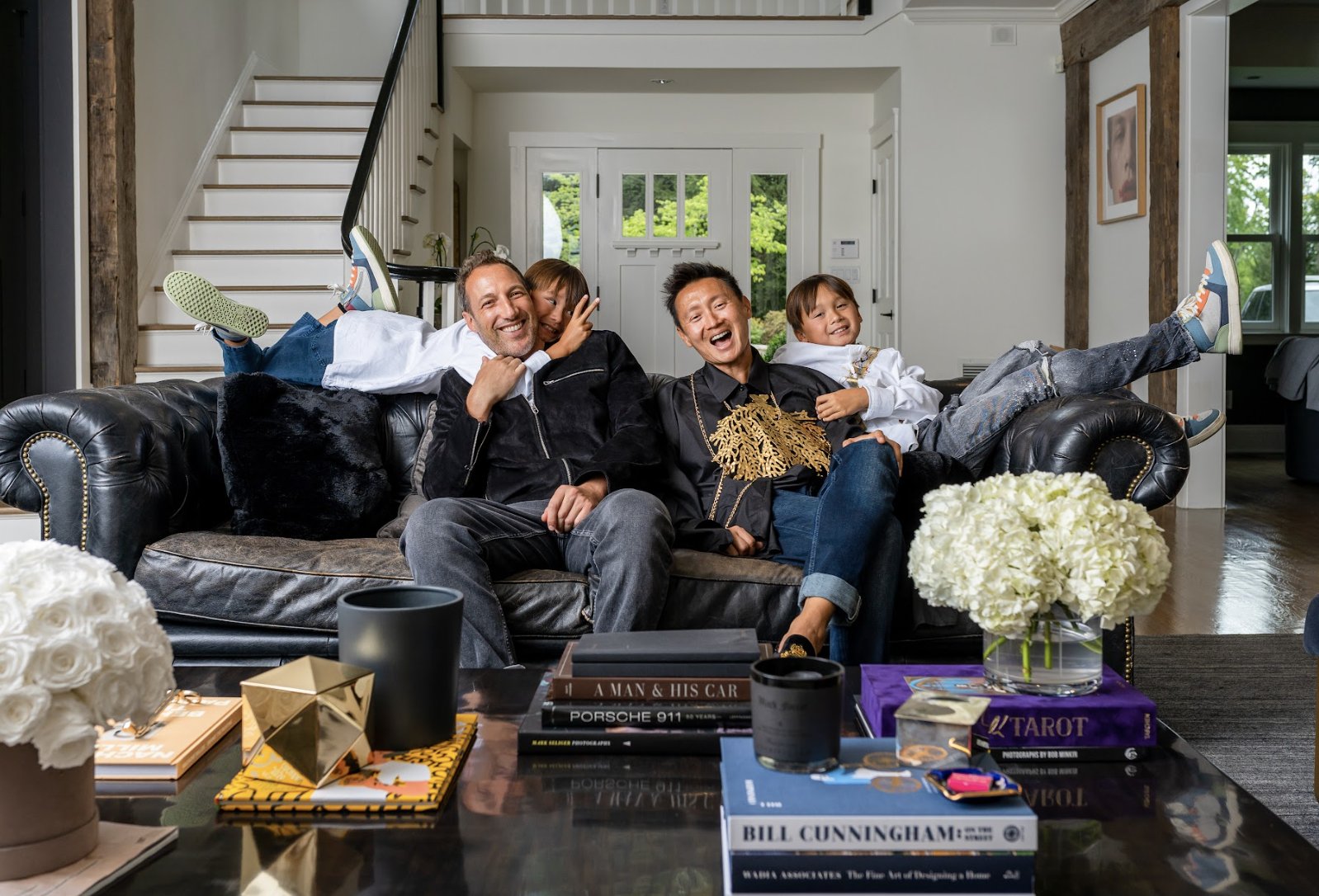 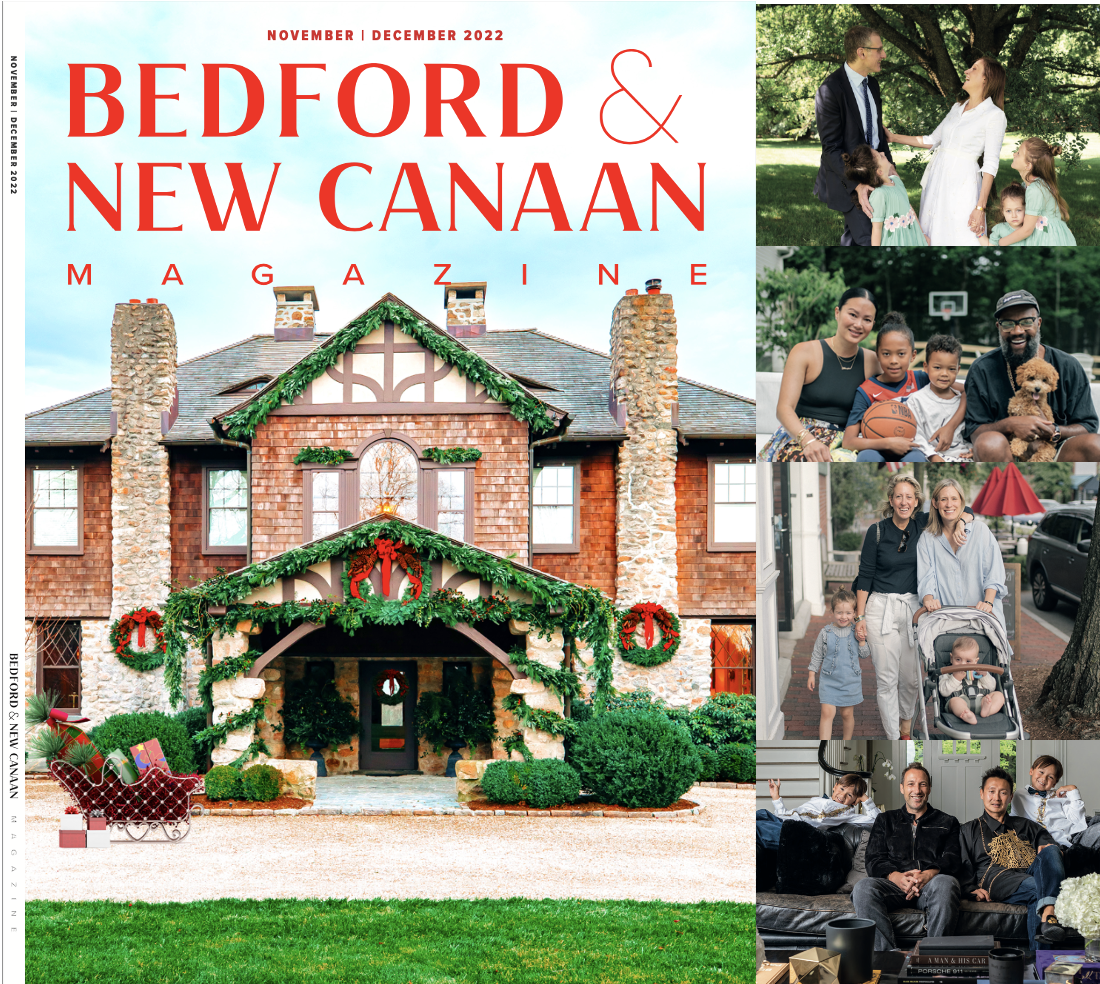 Andy and Evan moved-in to the ‘crossroads of culture’ – across from Martha Stewart, Ralph Lauren and the John Jay Homestead, and next door to Caramoor – at the beginning of Covid…and they’re already directing traffic! They’re already their own ‘Seen In & Around Town’ for any publication – having already hosted some special events, and decidedly at the top of the A-list at what seems like every local party and charitable event! They’re the life of the party wherever they go!

Andy was born in Taiwan, where “My great-grandfather was very wealthy and had four wives and so I have many cousins. My grandfather was a congressman. And my father, who was spoiled and didn’t really work that hard, was an entrepreneur who retired at 45, and has spent his time painting for the 35 years since then. I grew up in a big house where the door was always open and there were always a lot of people around, and I see positivity and happiness from everybody.” After high school in Taiwan, Andy moved to Richmond, Virginia, with his mother and two brothers, because – however incongruous it may have been – an uncle, who’d been a Phd and Professor at Columbia, had opened a Chinese restaurant there [and Andy and his mom and brothers were coming to help out]. “I was good with art, so I went to Virginia Commonwealth University and majored in Fashion Design. As a senior I did an internship and then got offered a job at George Simonton. It was the late ‘80s and I loved the energy in New York City, so I moved from Virginia to New York. I did my first collection at 22 for Clique and it sold out in Barneys, Saks and Bloomingdales. I’ve designed for Magaschoni Cashmere, J Crew Luxury, Michael Kors, and many others. I’ve traveled around the world working in the fashion business as a designer and as a partner of a manufacturing company. And I’ve had sell-out collections on QVC in the United Kingdom and Italy.”

Andy is a character. Like Bedford’s-own Truman Capote. He’s blatantly flamboyant – designing everything he wears – from the giant textile flower he might attach to the lapel of a jacket he’s sequined to go with the outrageous sneakers he’s selected for a night out, to showing up for tennis in a smart black blazer with silver highlighting and with a translucent Louis Vuitton tennis bag. He’s uber social – and out and about in Bedford and New York City every day! He’s smart as a whip! And, in his friendly, humorous and entertaining way, he’s sometimes just as gay – or Taiwanese – as he wants to be, given the circumstances. He can sometimes appear to be flitting around, but as soon as he makes eye contact and engages in conversation, he is revealed as thoughtful, serious and genuine. “I’m a happy person,” Andy declares. “I’m always positive and non-confrontational and courteous. I give extra effort to presenting myself, dressing special, and looking colorful. I feel like 95% of people like me and what I bring to the table!”

In addition to everything else, Andy volunteers for YAI, an organization involved in supporting children with special needs, often participating in YAI’s parent support groups. He also mentors younger artists coming up in the fashion industry, and is presently working with Alex Thrane developing SHMEAR. “Alex is a very talented young man who’s put together an exciting new line of cashmere outerwear. I’ve helped him with design, pricing, sourcing the 40% recycled materials and organic dyes, production, marketing and sales – we even have a few of the Brooklyn Nets wearing Shmear, and are already collaborating with a gallery in New York and selling online,” Andy says with pride about his student.

Evan was born in Staten Island, grew up in Old Bridge, New Jersey, went to Madison Central public high school, and then college at the University of Wisconsin. With the life-long dream of becoming a heart surgeon, Evan moved back to New York, got his M.D. from Rutgers Medical School, and did his residency for surgery at Maimonides and a year doing cancer research at NYU. Along the way, he was married – to a woman. In 2007, he landed the coveted one-spot-a-year residency in heart surgery at Mt. Sinai…and at the same time he’d begun to see Andy. Evan reveals, “Two weeks into what would have been another six years of tortuous work to become a heart surgeon, Andy and I took a trip to Napa. We were sitting at a resort overlooking the world and drinking wine, and I had an epiphany. I realized I was chasing what I wasn’t. Personally and professionally. I was coming out. And when we returned to New York I told Mt. Sinai I wasn’t going to continue in heart surgery.”

“My old boss at Maimonades hired me to do general surgery…and I began a two-year process of researching surgical issues and procedures specifically affecting the gay community. I found that no one was talking about sex. Even when a gay man was consulting with a gay doctor. And there was no science behind the treatment of conditions endemic to the gay community,” Evan explains. “In 2009, I started Bespoke Surgical, and now we’re the leading surgical center for both medically advised and cosmetic rectal procedures, and have expanded the practice to include psychological treatment. I see about 75 patients and perform about 15 surgeries a week. And I teach other doctors how to do what we’re doing, as we’re at the forefront of this whole area of treatment.”

Evan has also founded a line of health care products, called Futuremethod, designed to support the way the gay community engages. “Do what you want – safely,” Evan says. “We have six healthy products, and as a company we’re trying to help push the narrative and educate the community.”

The couple are unabashedly adoring about their twin 10-year old sons, Phoenix and Sebastian. Andy gives some background saying, “Our surrogate gave birth to our boys at only 34 weeks. When we finally got them out of the NICU in Los Angeles where they were born, we had to arrange a special flight just to get them back to New York. I needed to quit working to take care of them, they didn’t start speaking until they were three years old, and they were developmentally slower. When they were younger, I was managing the private teachers and half-dozen specialists they saw daily. Now, I’m managing two healthy boys, busy with school, ice hockey and tennis.” And Evan adds, “The boys are the center of our universe. Actually, when we purchased the properties here we needed an escape for Covid but intended to keep Manhattan as our home base. But after we spent a bit of time as a family up here in the country, the boys sat me and Andy down for a talk and asked if they could grow up here instead of in the City! We still keep an apartment in the City, but this is home now! We’ve built a pool, a basketball court and a tennis court so the boys are never short on activities, and we installed vegetable and flower gardens so the boys can participate and learn about real food. They’ve made lots of friends, and they love it here!”

About their trendsetting property redesign – all of the buildings are painted in the dramatic Benjamin Moore ‘Abyss’, which appears sometimes blue, sometimes dark gray, and sometimes black – Andy says, “It took forty people working here full-time to refinish and redecorate the inside of the main house and the guest house, rebuild the garage, and redo all the landscaping, and we’re just finishing construction of the big party barn out in the front of the property. We’ve put a lot of work into making the house reflect our sensibilities.”

And about their busy social schedule, Andy remarks, “We want to live richly, with art, fashion, entertainment, culture, and travel. We go to concerts several nights a week. And we want to share our experience with our friends. We’re even thinking of using our new barn to host visiting chef tasting dinners so we can share different cuisines with groups of friends. We like people with a zest for life! Like Clive Davis – he’s 90 years old and works every day of his life! We like to take life to a different level!” This summer, Andy and Evan hosted Indian Prince Manvendra, the first openly gay member of any royal family, at a showing of a documentary that he stars in and a reception at the Bedford Playhouse, a  lively gathering at Glen Arbor Golf Club, and a private party at their house that included the ‘cross-border buddy’ Congressmen, Sean Patrick Maloney from New York and Jim Himes from Connecticut, and a performance by the Chinese Music Ensemble of New York. And, before the boys came back from sleepaway camp, Andy and Evan threw a tented bash of a barbeque, designed by party-planner-extraordinaires, Brett and Deanna at La Maison Fete, and featuring several food trucks, a DJ, and liquor and chocolate companies sampling their wares – which doubled as a birthday party for Martha Stewart. “Martha is my fairy godmother in Bedford,” Andy laughs. Evan – who had a limo waiting at the end of Martha’s birthday party to take him and a couple of friends up to see Phish at Bethel Woods that night! –  comments, “Andy is a social magnet. He’s the best at making connections. He vets people, and if you’re cool enough for Andy – you’re ‘in’.”

The two are good tennis players – and fun to play with. They are each quite competitive – although each says the other is more so. And they prefer to play on opposing sides of the court, with Evan regularly questioning Andy’s ‘competitive’ line calls. And Andy is a superb chef – often bringing Chinese dumplings or some other delicacy – which either he or one of the chefs on their everbusy house staff prepared – as a housewarming treat or just to make meeting him for any activity seem more special.

Challenged to pick a few guests for a fantasy dinner party, Andy immediately names, “Julia Child, the British fashion designer Alexander McQueen, and then my friends who are always invited, like Martha, Richard Gere, Clive Davis, Angelina and Monte Lipman…” And Evan breaks-in, “This is going to turn into a real event! Andy’s going to start planning it now for next summer! I want to have Tom Petty, and Jerry Garcia, and Trey Anastasio from Phish!” 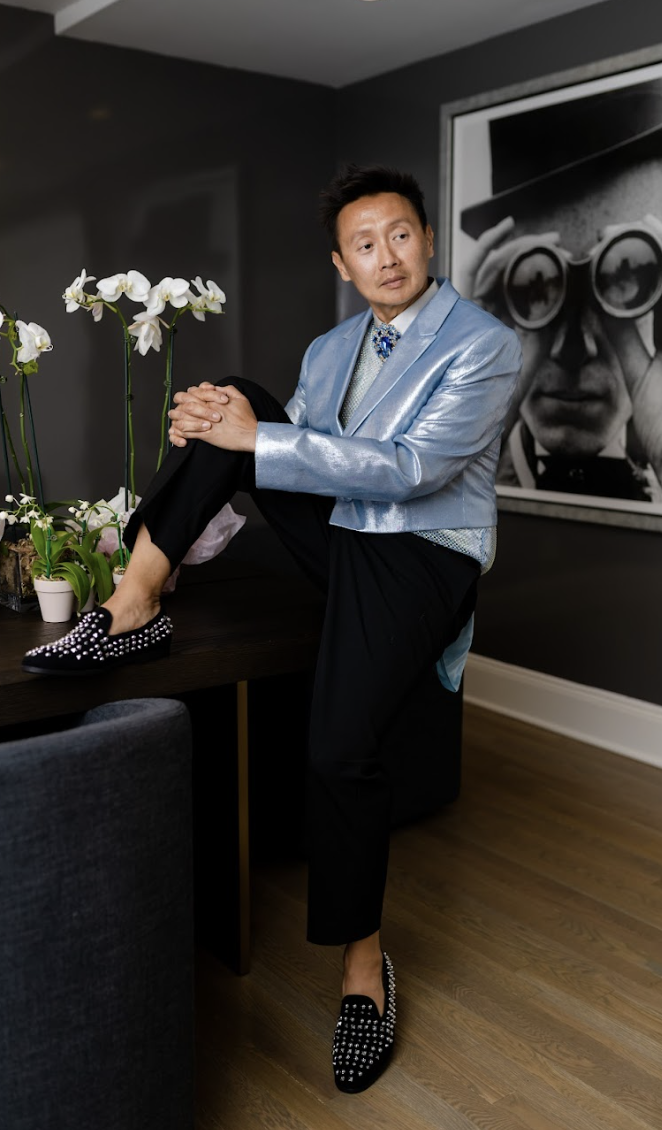 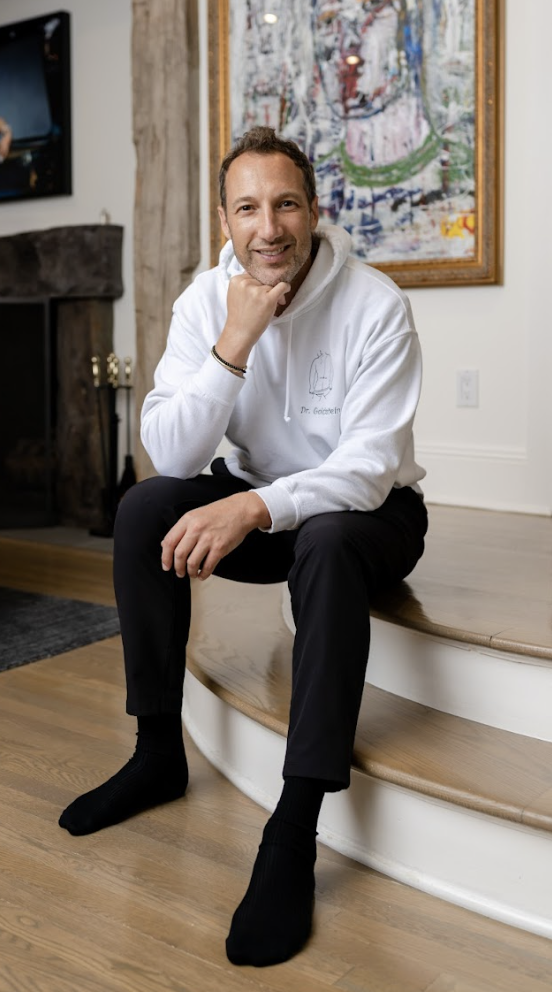 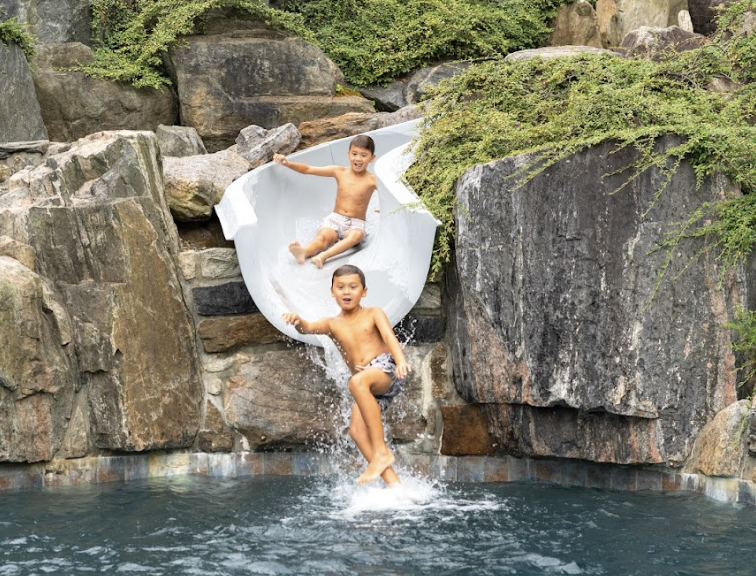 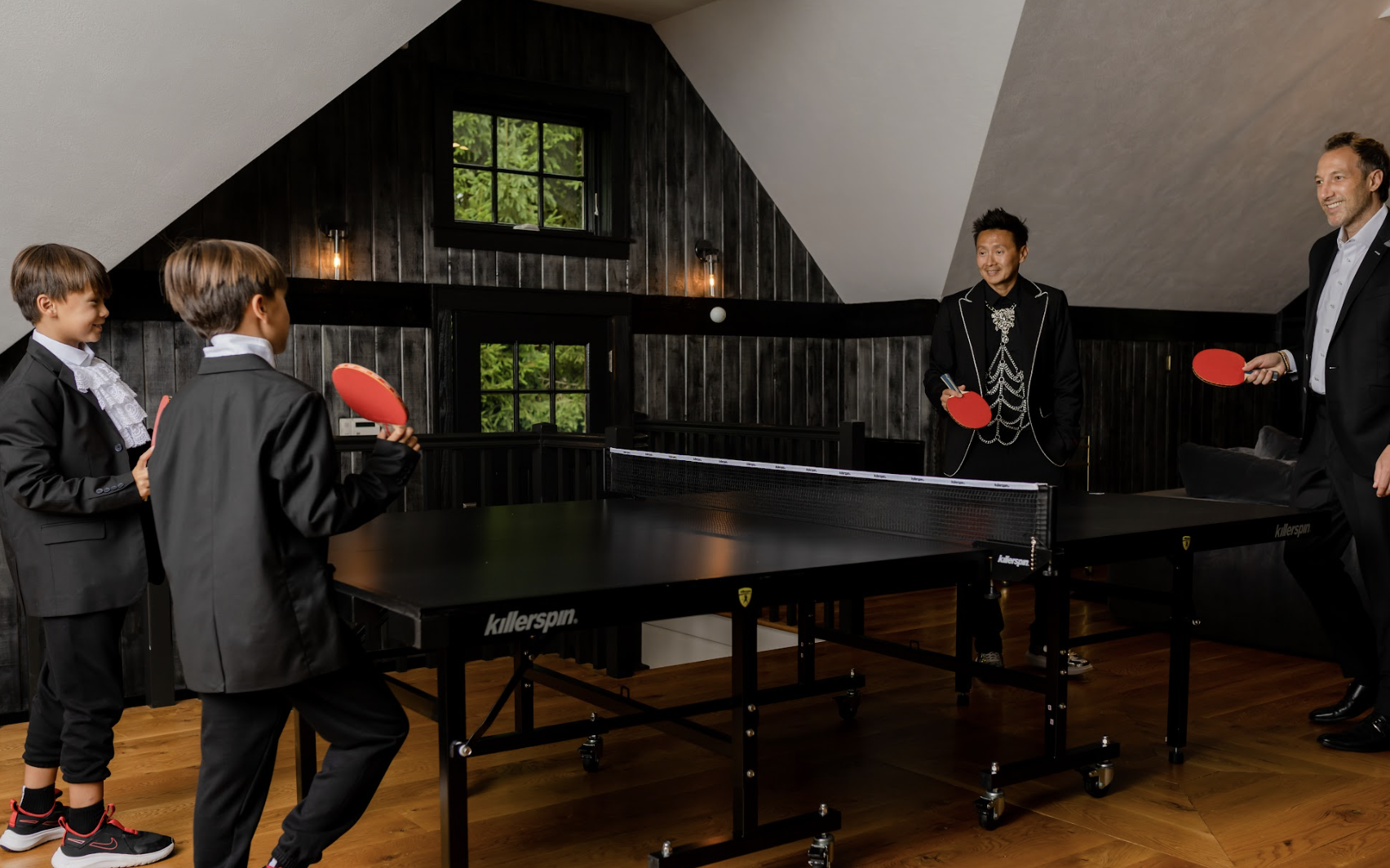 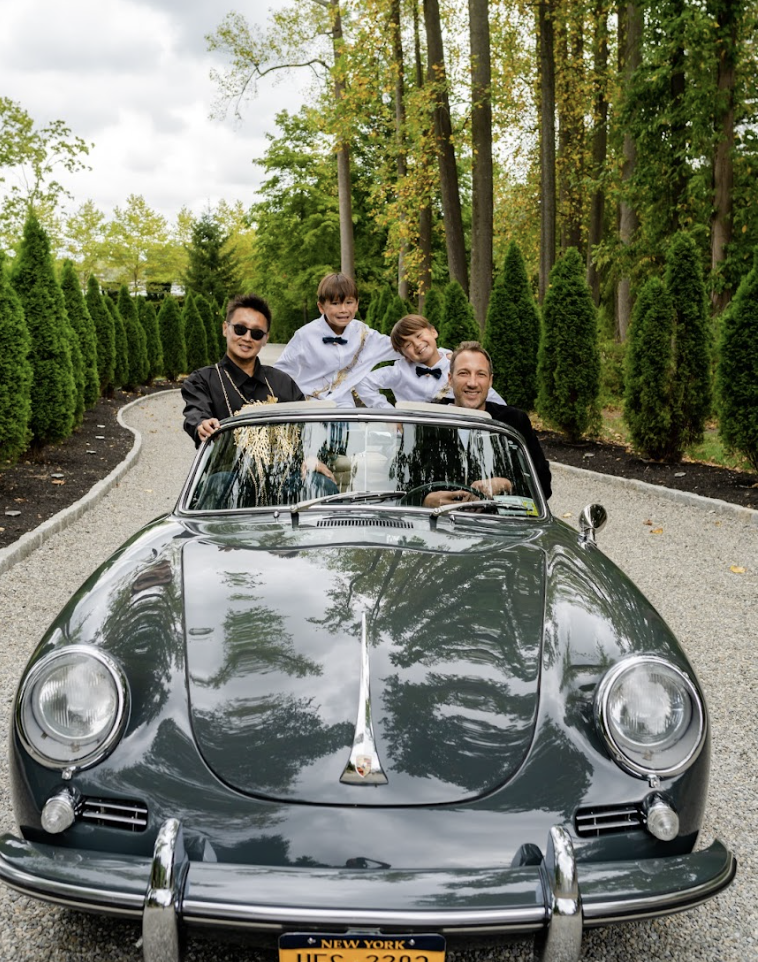 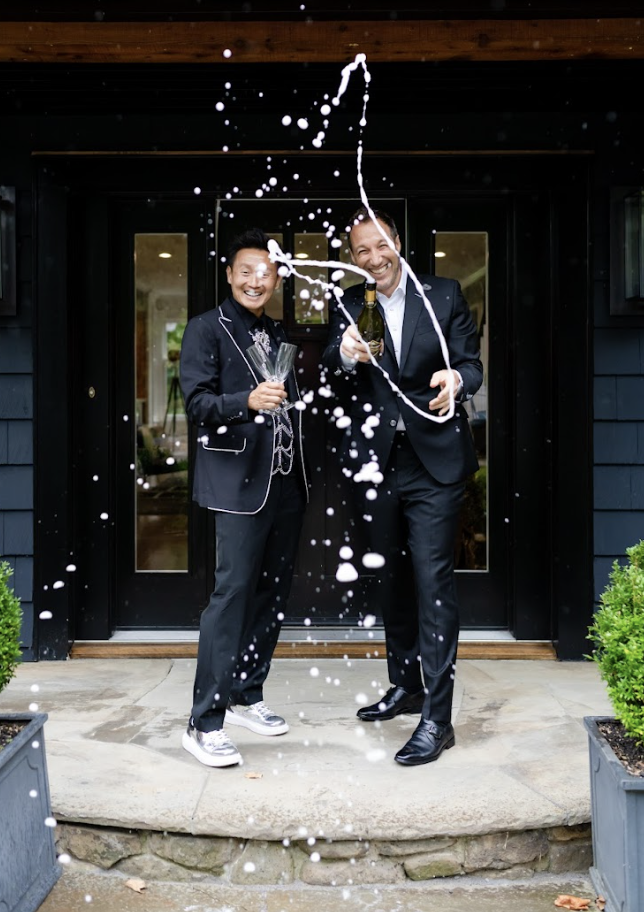 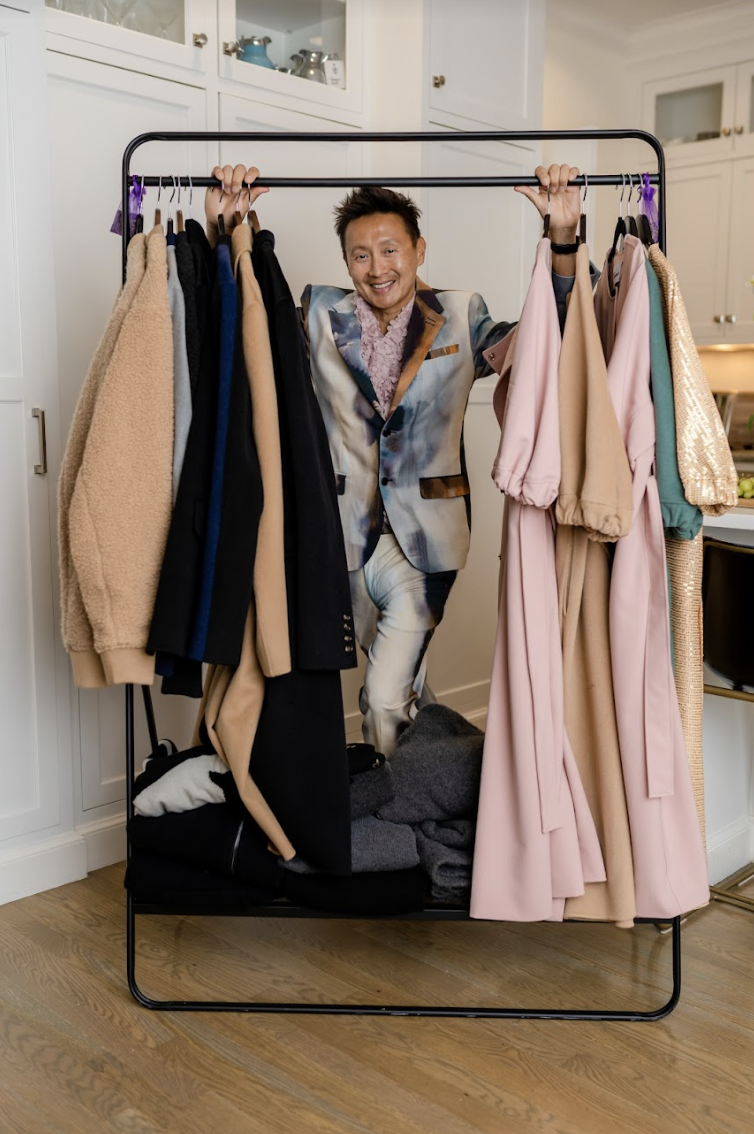 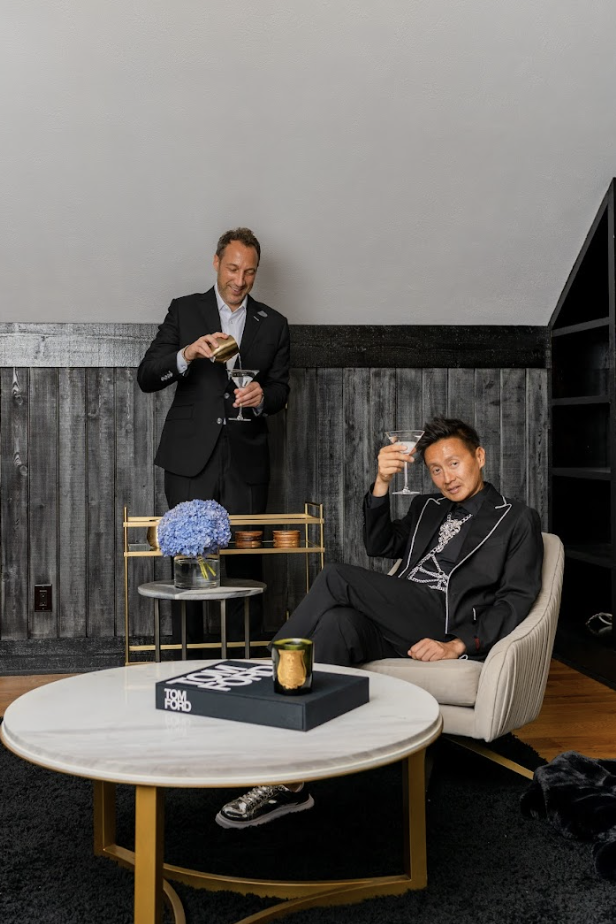 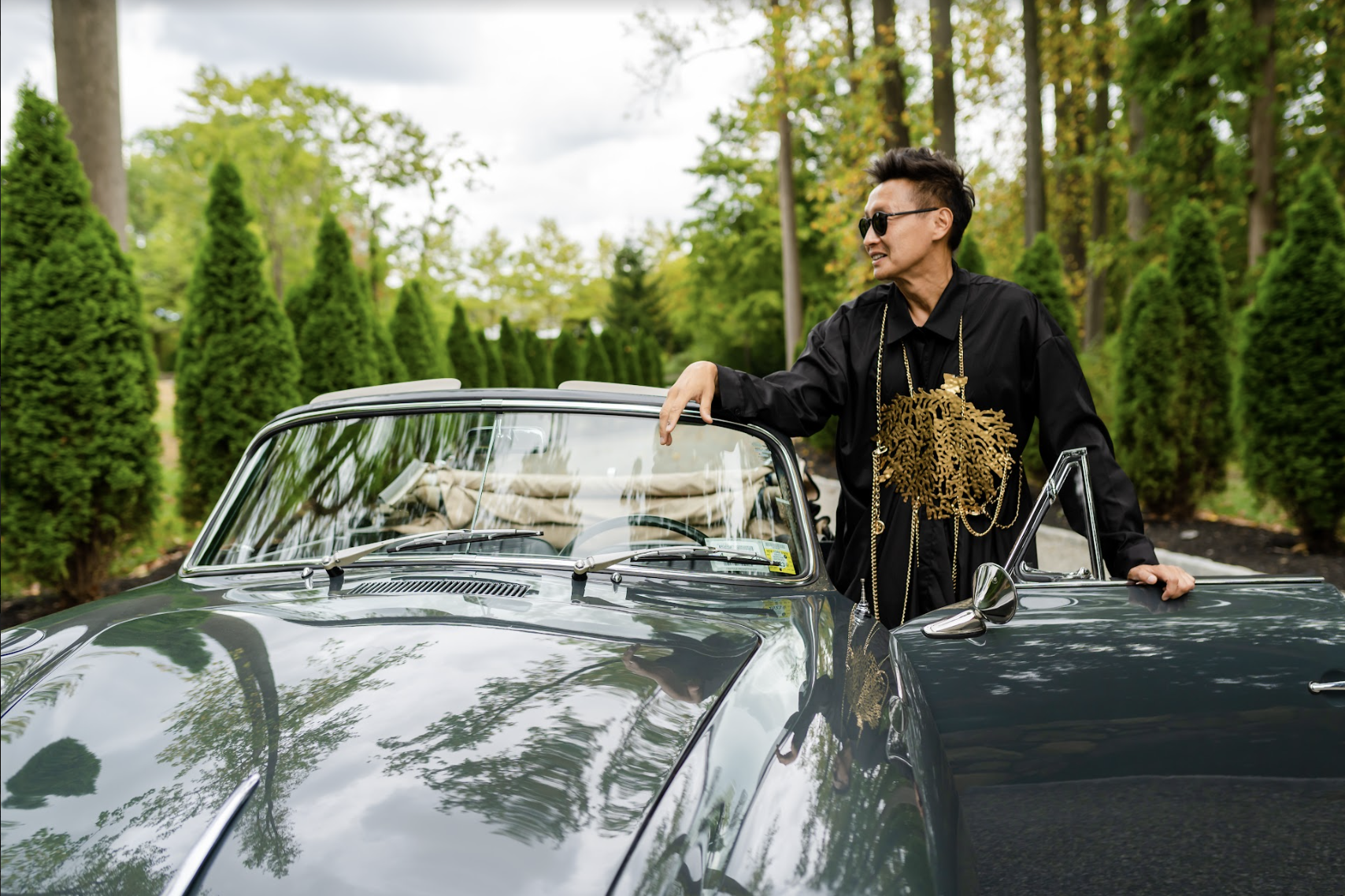 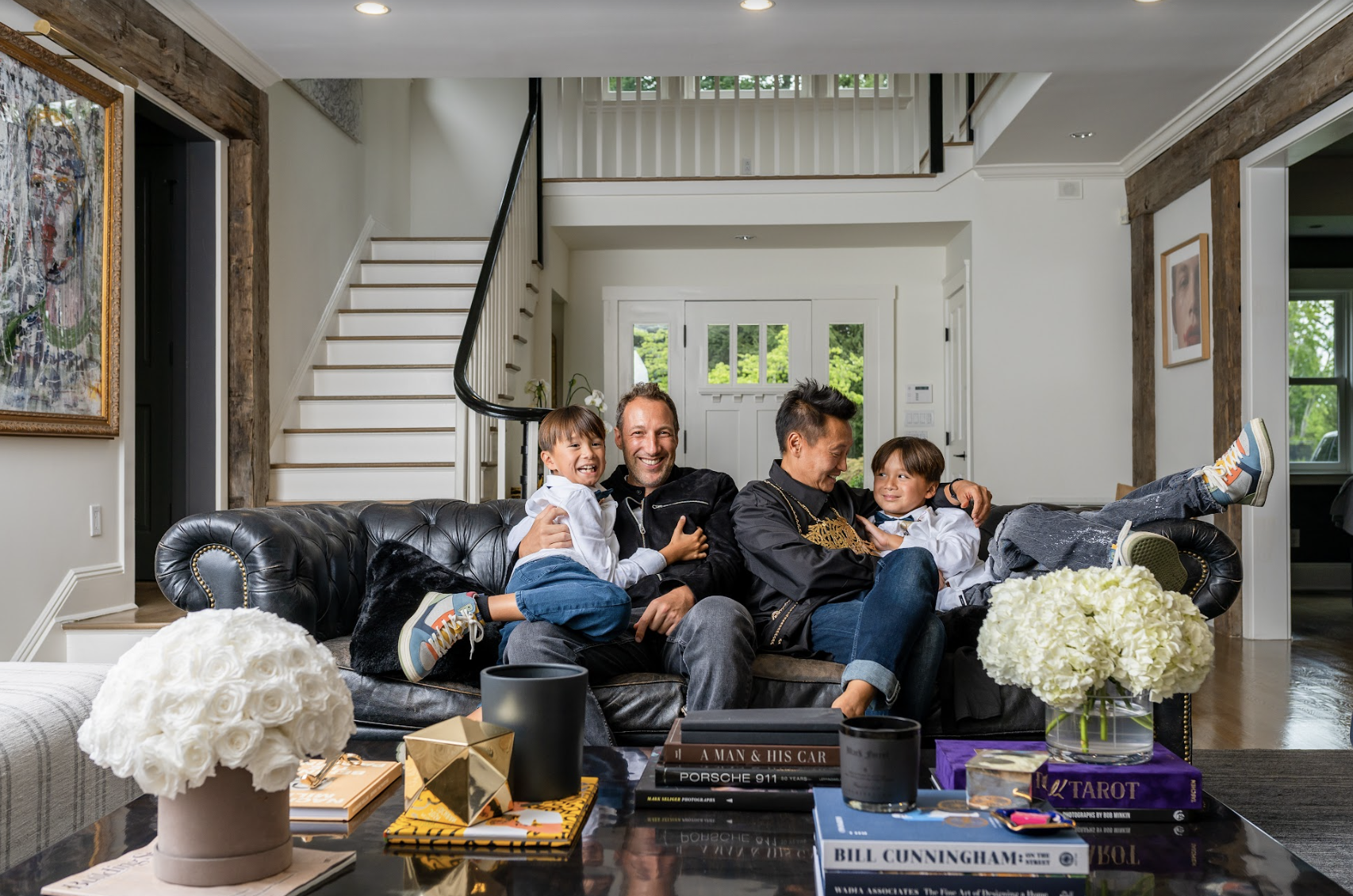