Along the twists and turns of a backcountry Bedford road, hidden from view, behind a
large wrought iron gate and up an impressive gravel driveway, positioned perfectly on 20 acres filled with mature landscaping, is the home of Chris Lacovara and Sam Green, and their twins, Alex and Kate.

The Lacovara Greens are only the home’s third family-in-residence, even though the house was built at the turn of the 20th Century. The house was built by architect
Charles Wetmore, who was famous for having designed Grand Central, the Helmsley Building, and the New York
Yacht Club, for his Park Avenue socialite cousin, Maude Wetmore. The stone manse was inspired by a beloved country house in England, and was meant to be a stop-
over between Maud’s Manhattan apartment and her mansion in Newport – which is now a museum.

“We love Manhattan. The twins are in school in the City, and Chris needs to be in the office for work. But Bedford is our place to escape and retreat, re-energize and flourish. The twins have space to play, and we have space to entertain and have fun!” Sam laughs. Chris continues, “We knew this would be our house the moment we saw it. It’s impossible to build a home like this now, and the bones were just so fantastic. But it needed work… so we brought in the notable designer, Christina Roughan of Roughan Interiors, to help
us reimagine this beautiful 1900 home into the more modern spaces that we could really see ourselves using.” 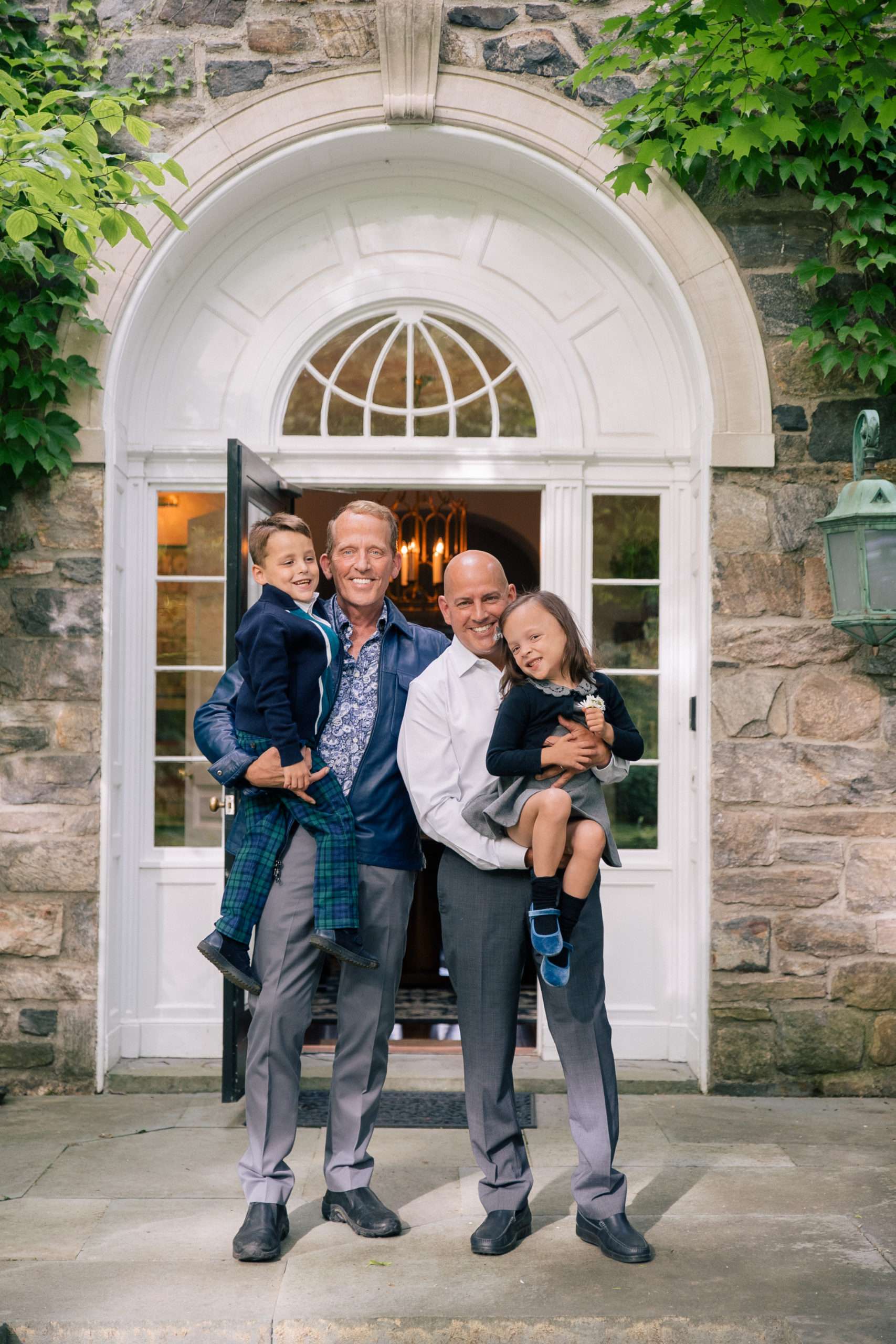 Chris Lacovara and Sam Green chose
Bedford as a weekend respite and a place
that they could make into a retreat for their
family from the bustle of the City. “We came to see the house on a rainy day in February in 2019, and it was kind of dilapidated… but we couldn’t stop talking about it afterwards. It was the first house we saw up here,” Sam explains. “Now we’re considering making Bedford our full-time spot.”

After graduating from Harvard in just three
years, Chris had a career on Wall Street, first at Goldman Sachs, then Lazard Freres, and finally KKR, before leaving finance to return to law school at Columbia. “I didn’t feel like I was doing enough to give back to the world, and I guess most guys would probably retire and go on a board and play golf… but I stink at golf. So my pivot was going to law school in my early forties, which was the best decision I ever made,” Chris declares. After graduating, he clerked on the 3rd Circuit Court of Appeals, and then New York’s Court of Appeals, before
becoming an associate at Patterson Belknap. But Chris was always interested in housing and homelessness, so he’s spent the last 6 years of his career working with Community Access, a non-profit organization based in the Bronx, which develops, builds, and operates housing for people coming out of the shelter system. 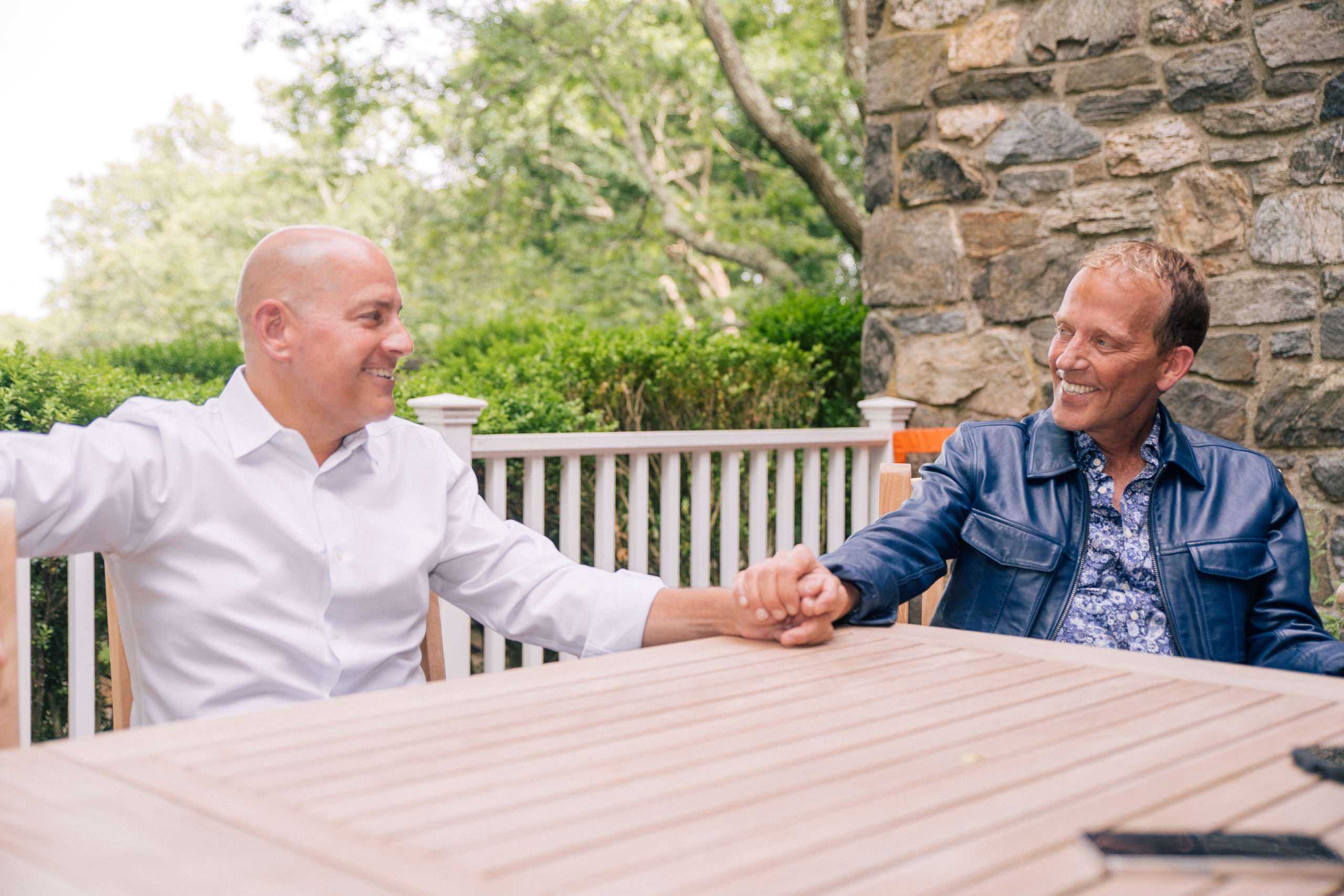 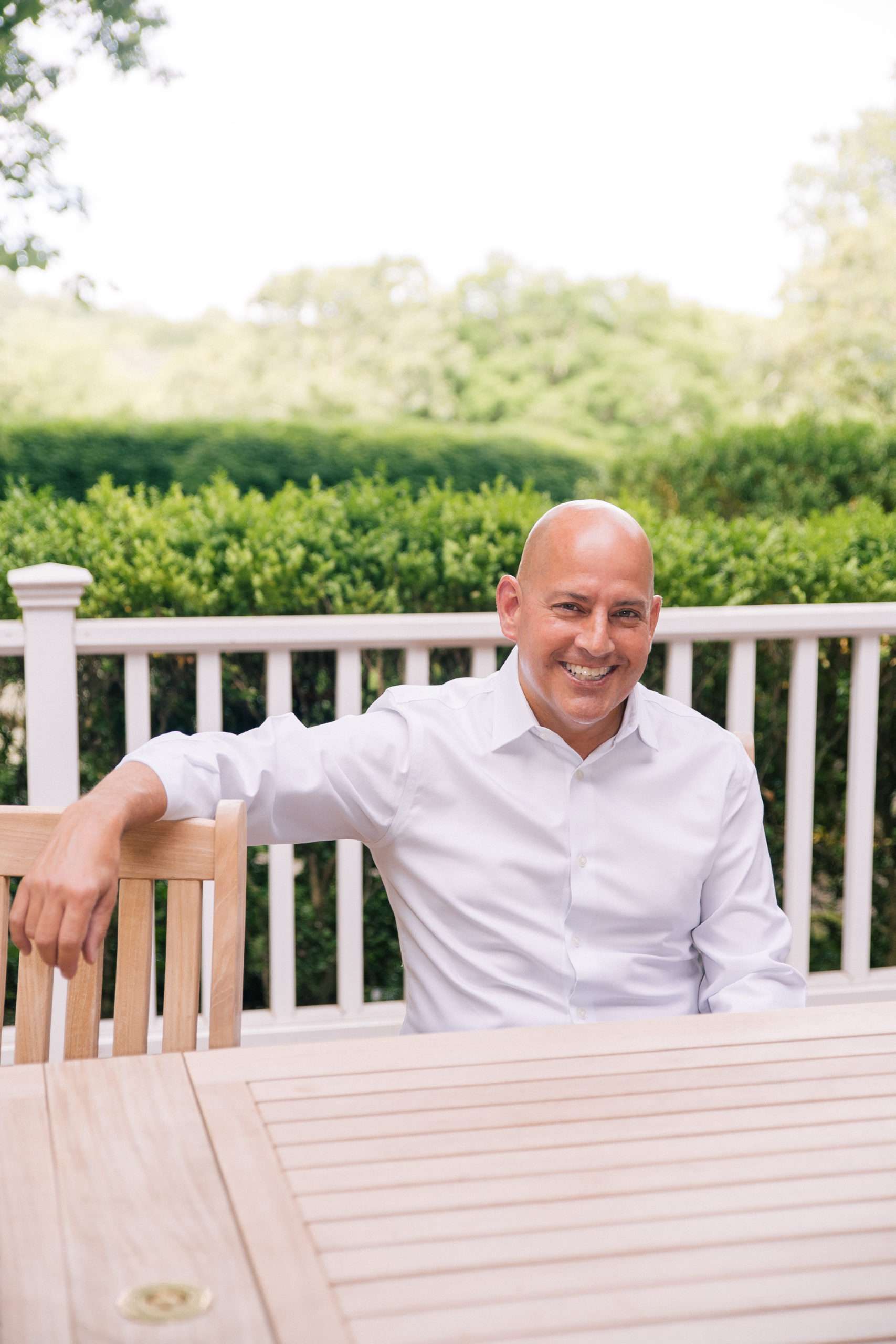 The organization is focused on ‘supportive housing’ – housing for people who have a history of homelessness, many of whom have mental health issues or other trauma. “It’s not just the apartment, it’s also social services that are provided. For most people we house, this is their first apartment! And it’s a life changing event for about four to five thousand people that are being housed at any given time by the organization, and thousands of others who are helped outside
of the housing by other social services we provide,” Chris says with a smile. Chris runs Community Access’ financial and legal affairs, and is the non-profit’s real estate developer, “I get to go to work every day
feeling like I’m making a very direct and positive contribution.”

Sam spent most of his career working as a visiting nurse practitioner and taking care of elderly New York residents in their own homes on the Upper West Side of Manhattan, and has a Doctorate of Nursing
Practice from Columbia. “I came to New York in the early ‘90s from Corpus Christie, Texas. I thought I wanted to be an actor and, being a man that needs a schedule, I gave myself a year to make it happen. And it just didn’t. …So I put myself through nursing school instead, and for a couple of decades, I had a few hundred patients, and worked hard keeping homebound elderly people out of the hospital.” 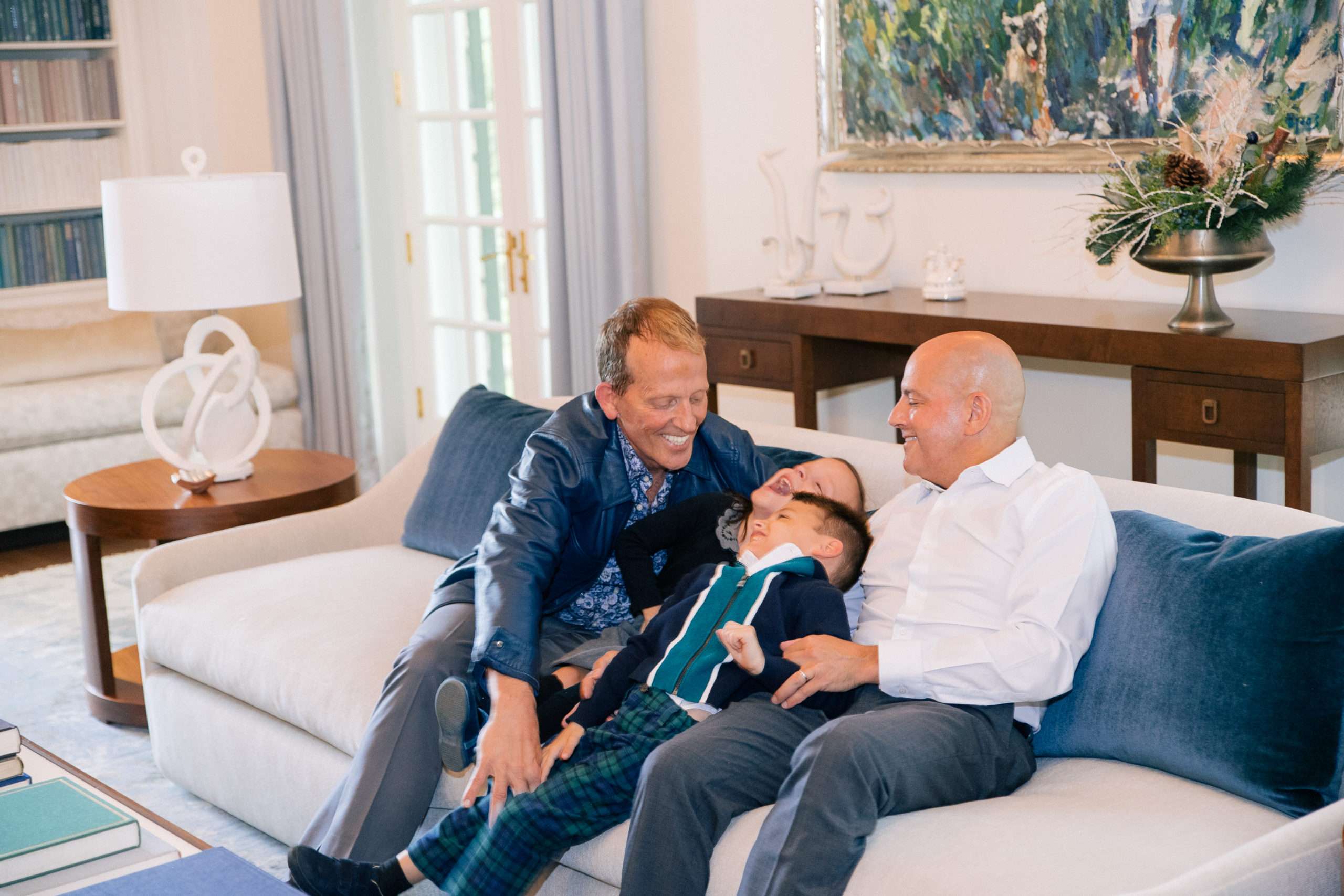 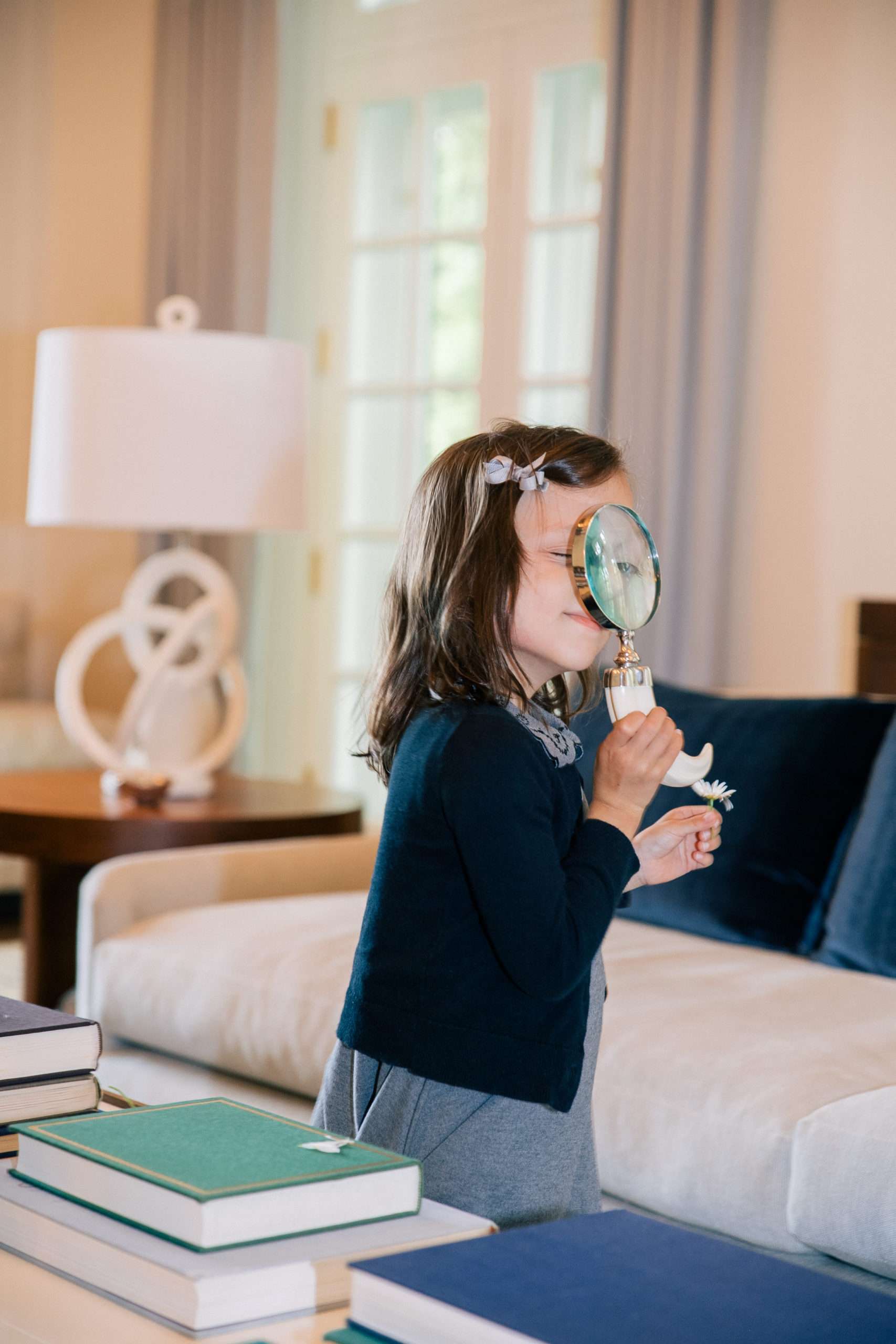 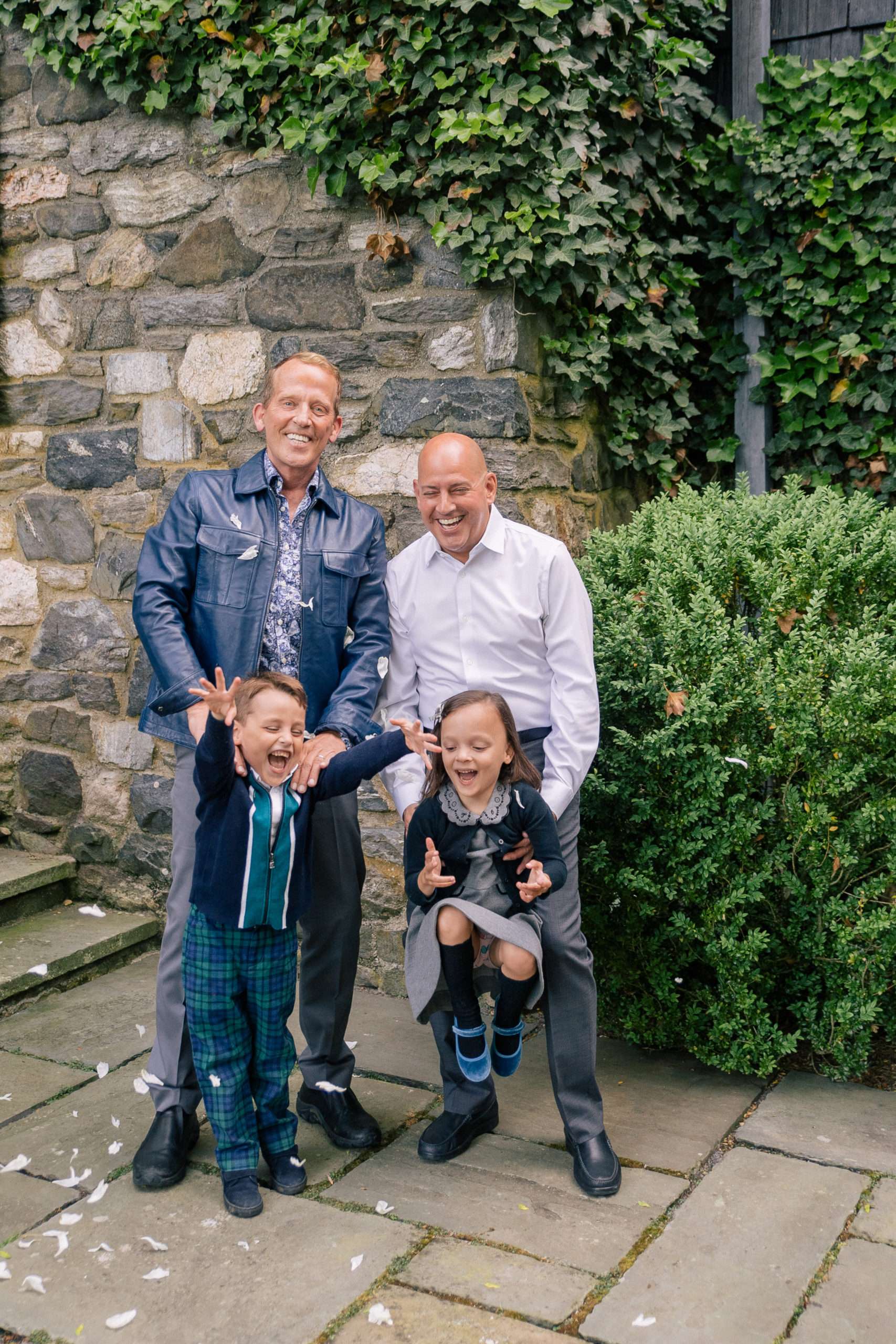 But most of all, Sam and Chris are each ‘dad’ to their twins, Alex and Kate. At five years old, the very cute kids are a handful
– and they have the complete run of the house! Alex can usually be found climbing on his favorite rock or playing on the jungle gym in the front yard. And Kate likes to find beautiful flowers planted all around the property to make bouquets to bring to her dads. Although they’re already both
pretty good swimmers, both Kate and Alex are headed to swim camp this summer
so that they can make even better use of the Wetmore Mansion’s backyard pool, which Sam usually keeps at about 97 degrees.

“The living room transformation was
amazing. We used Venetian plaster to give the room a bit more depth.” The couple are big blue fans, as is evidenced by the living room and many other spaces in the home, and wanted the room to be vibrant without being overwhelming. And although everything in the house has an elegant aesthetic, it was a must that everything actually be kid friendly – and usable. Our kids are five! We didn’t want to have rooms that were off-limits. So Christina helped us to select durable fabrics, and choose furniture that would be not only beautiful, but also comfortable and practical.”

In the den/family room, Roughan took the beautiful and practical idea to the max by creating a massive custom upholstered ‘coffee table’ that could serve as a place to have pretty books or a tray for snacks…but that was actually sturdy enough for the kids to jump all over… which is exactly what they were doing when B&NC Mag came for a visit!

The family room is connected to the large and bright kitchen with a portal swing door, finished with polished accents. “It’s something you usually expect to see between a kitchen and a dining room, but I
love having this slightly unexpected piece lead straight to a more-utilized room,” Roughan remarks.

“We wanted to make the dining room a fun entertaining space, so. we used bright pops of colors throughout the room. 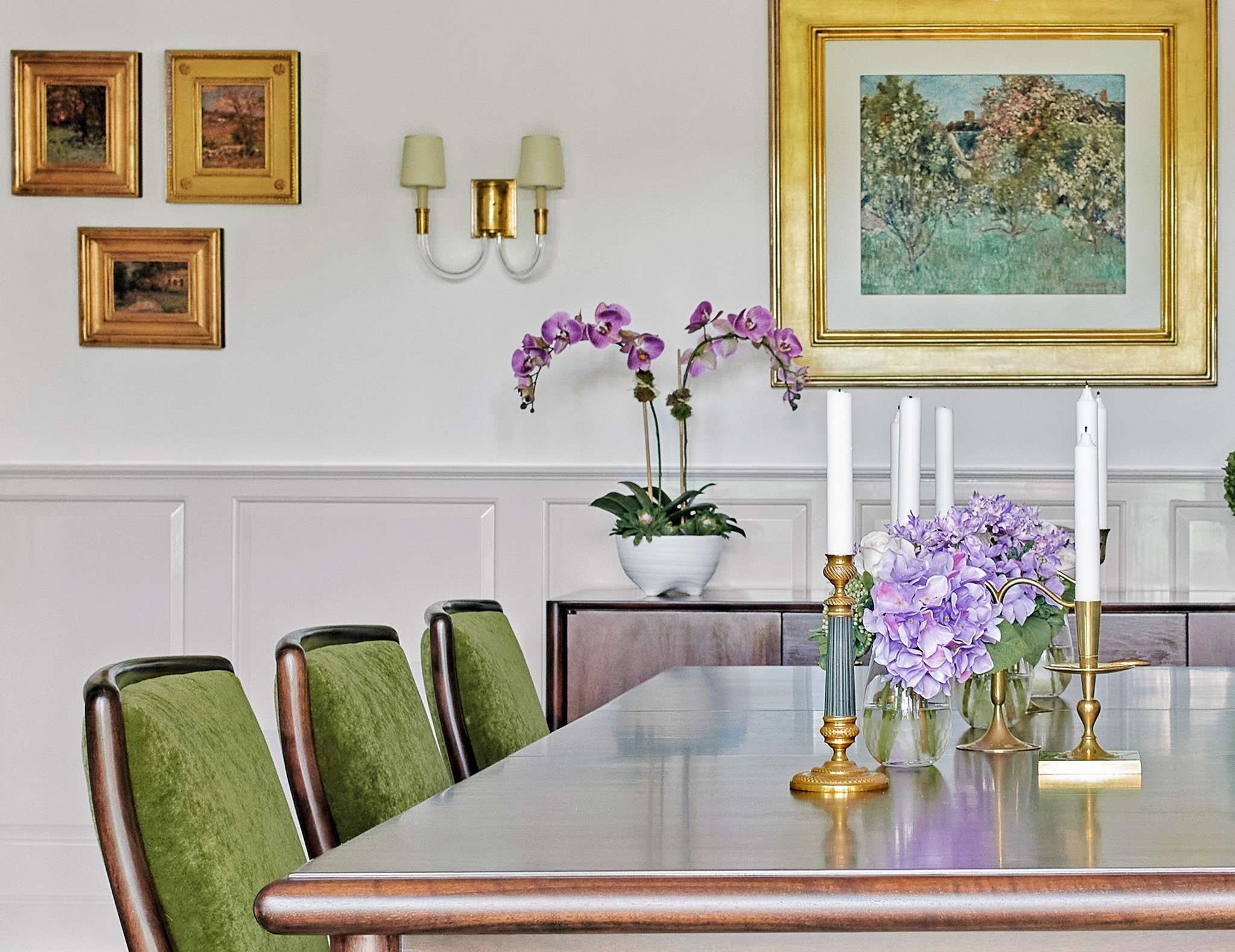 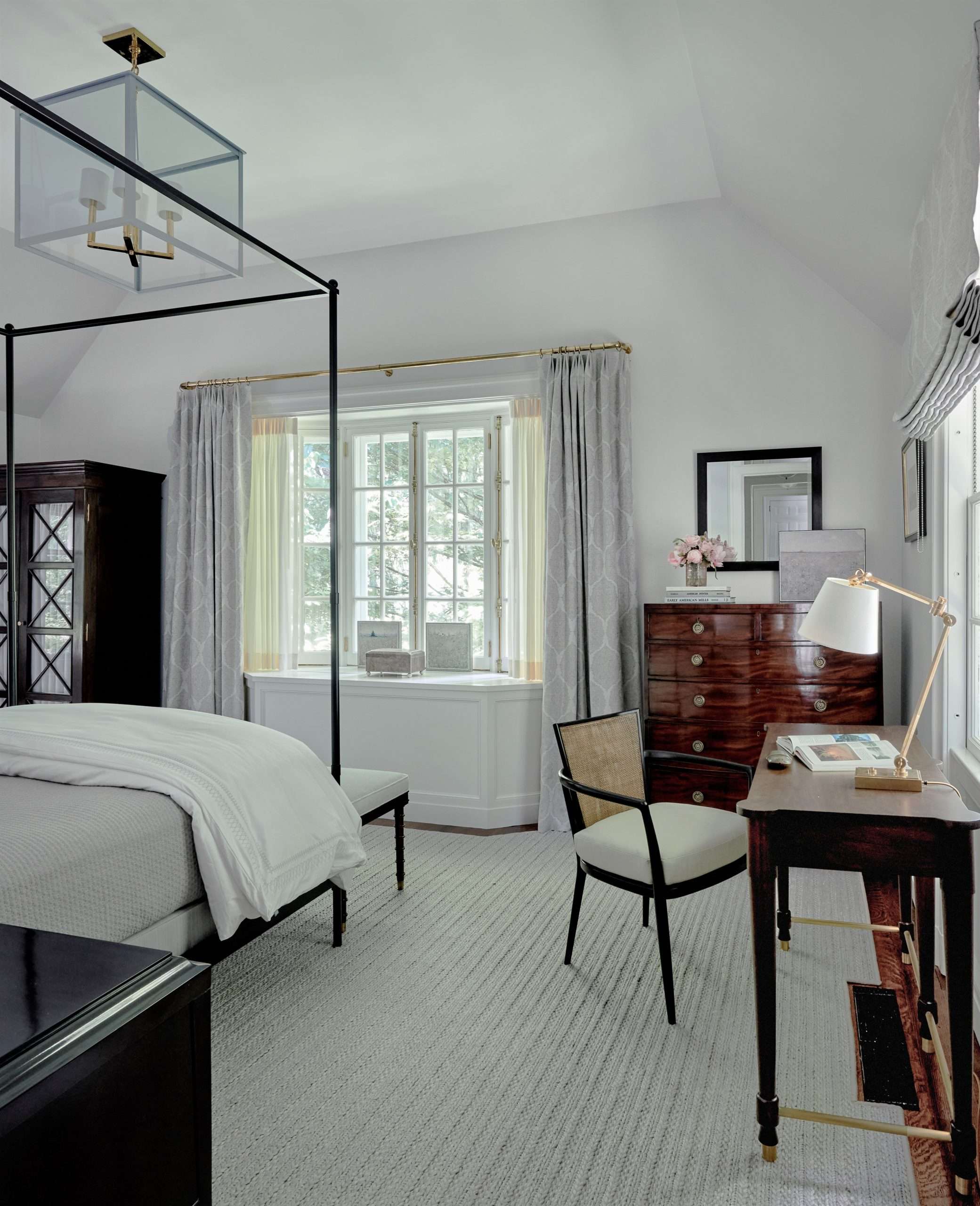 “The upstairs of our house is quite sizeable, but when you’re up there it doesn’t feel like some gargantuan home. Every room has its own private space – and the hallways are cozy,” the couple shared as they lead us up the regal staircase. With the help of Christina, they created a wing for the kids,
a separate secluded guest wing, and renovated the primary suite to give more space to the master bathroom. “The renovation of the master bathroom was actually the biggest renovation involved in the entire process,” Roughan shared. “We took what was originally a pretty small space and opened it up by borrowing space from a home office/gym that’s part of the
primary suite. That allowed us to add a sizable walk-in shower as well as a clawfoot bathtub, and create a much larger double vanity.

“We’re thrilled with the finished product. As luck would
have it, the house was ready for us just in
time for the pandemic. So we’ve spent
way more time here than we originally
anticipated…and loved every minute,” Sam
says. “The flow of the house and the rooms gives us just the right amount of closeness
while also having our own space – which
was necessary as we navigated school and
work from here for over a year. And now
that we’re back to our routine, it’s like a
treat every week when we walk through
the front door on a Friday. The subtle color
and sophisticated design elements in
these useable spaces brings us so much
joy,” Chris added.

Sam and Chris recently re-enlisted Roughan to do a complete renovation, redesign and redecoration of their spectacular apartment overlooking Central Park…and we can’t wait to see the results!