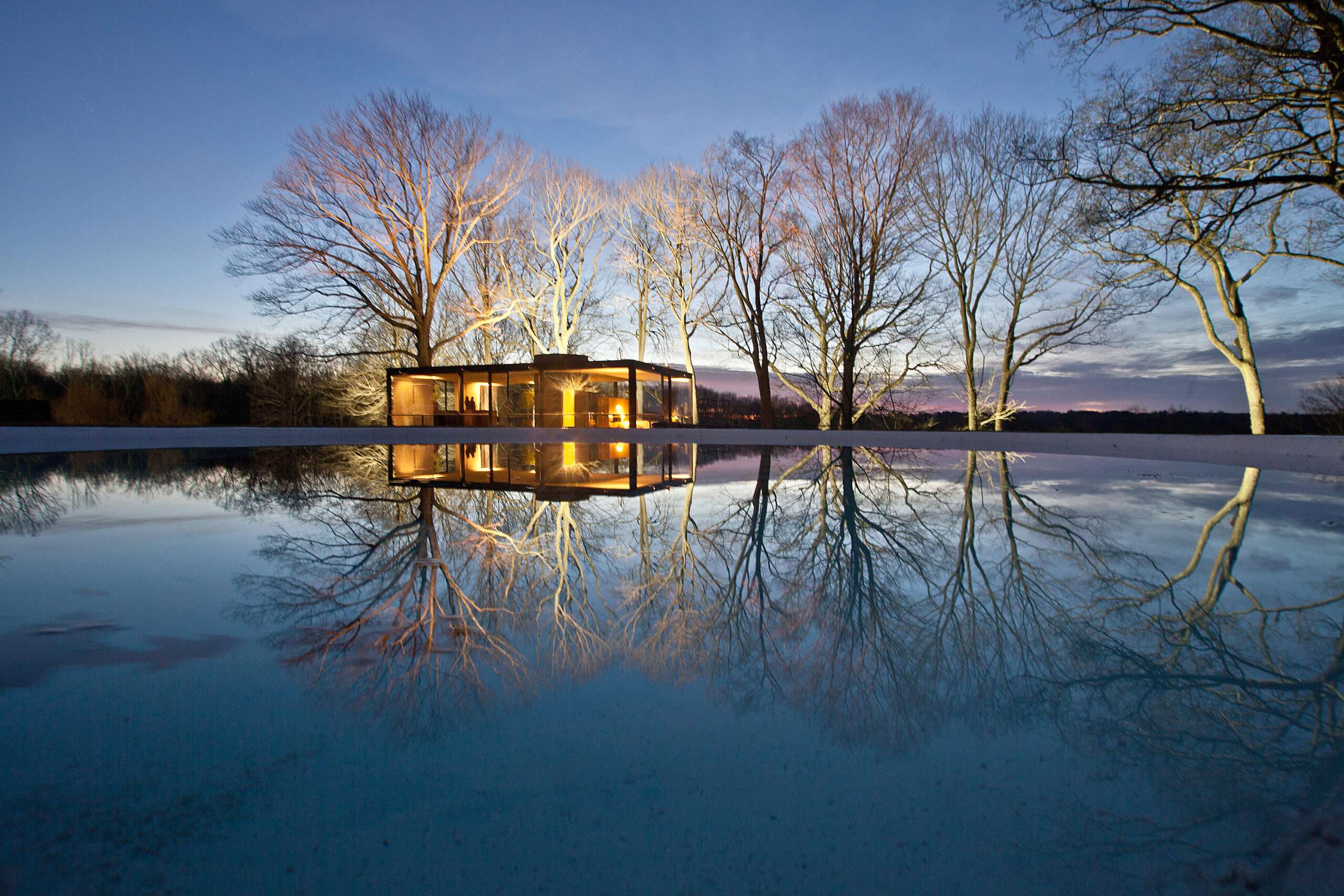 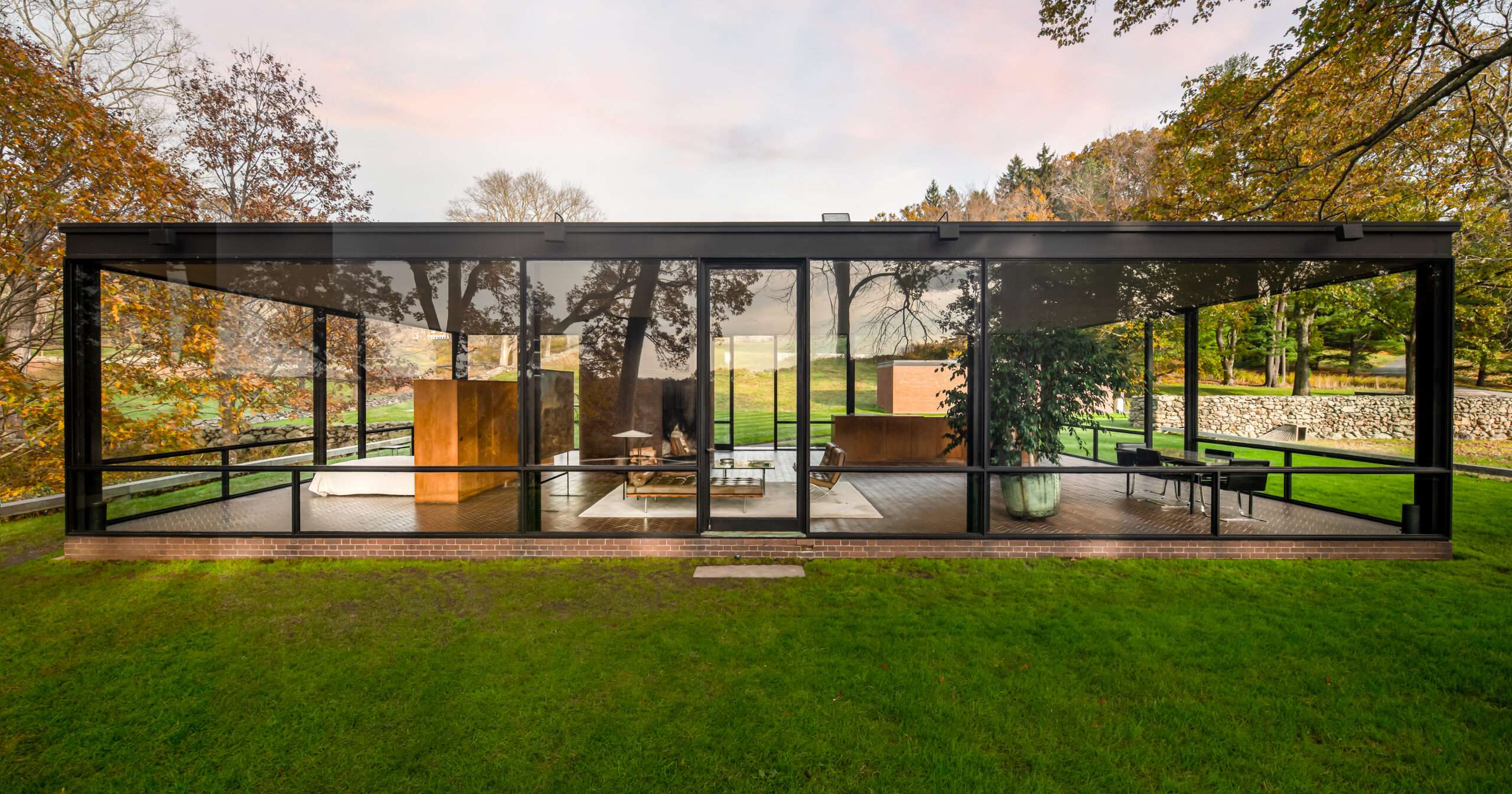 In the period immediately after World War II, New Canaan was like something out of a William Hamilton cartoon in The New Yorker – affluent, conservative, WASPy, with architectural tastes that tended toward Georgian and Second Empire Victorian. When Philip Johnson, then an emerging New York architect, heard of an available five acre parcel along Ponus Ridge Road, he walked the property, and imagined a compound of modernist buildings that could serve as his weekend refuge from New York City. 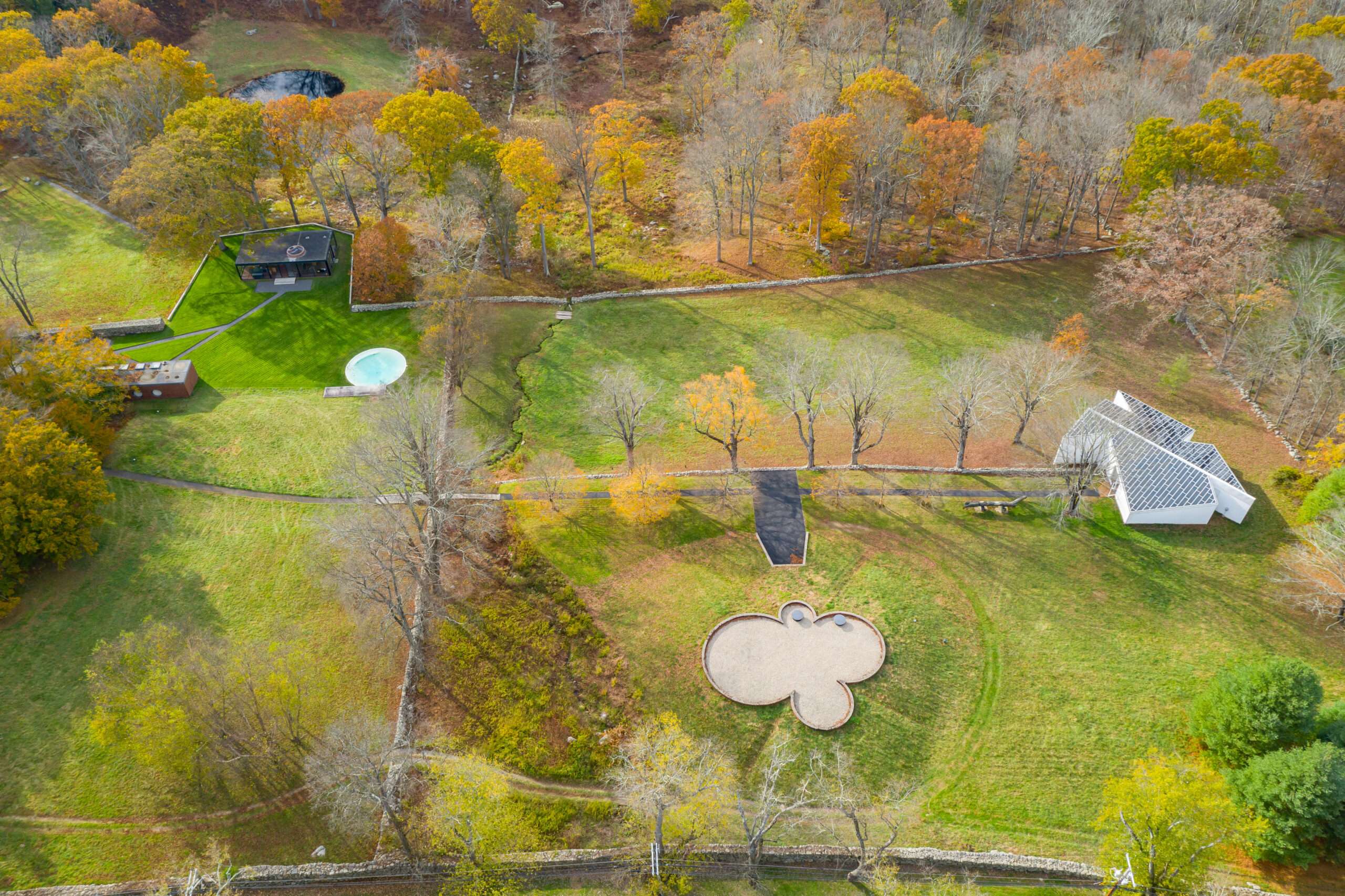 It was late 1945. Johnson probably didn’t imagine that he was about to launch a revolution that would put the five acres in New Canaan on the world architecture map. He was the exception to other highly-talented architects—heir to a substantial Cleveland fortune, he had the resources and confidence to engage in his whims and caprices. Having studied under Mies van der Rohe and Walter Gropius, he is credited with giving the modernist architectural movement its own name—the International Style. He imagined a group of buildings that would remain faithful to the minimalist aesthetics and exacting details of that style. He bought the five acre spread and slowly began adding to it, until it became 49 acres. New Canaan would never be the same.

By the time Johnson began designing the property’s centerpiece—The Glass House—two other architects of note had moved to New Canaan—Marcel Breuer and Eliot Noyes. These men would be joined by Landis Gores and John Johansen to become the iconic ‘Harvard Five’, all of them having either studied or taught at Harvard’s Graduate School of Design.

Johnson’s concept of The Glass House was that it be conceptually simple and diaphanous. He joked that the massive expanses of glass would be, from the inside, “the world’s most expensive wallpaper,” revealing the sylvan surroundings. The building meets the ground with several courses of red brick. There are no operable windows, and the building’s most striking feature is an asymmetrical brick cylinder that pierces the ceiling and accommodates the fireplace on one end and the bathroom on the other. 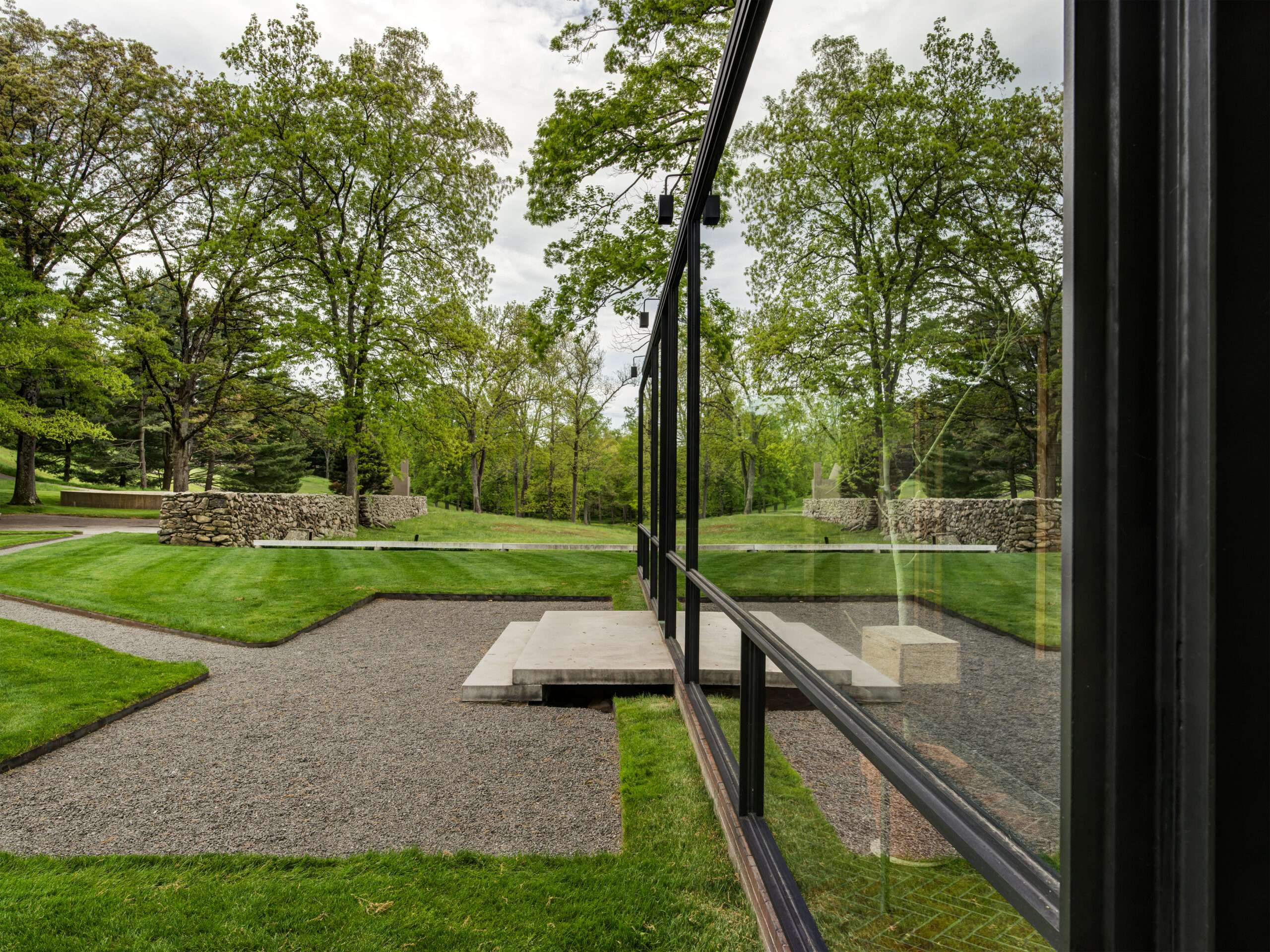 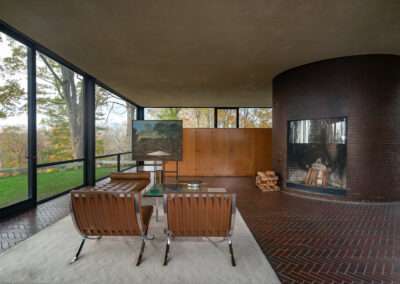 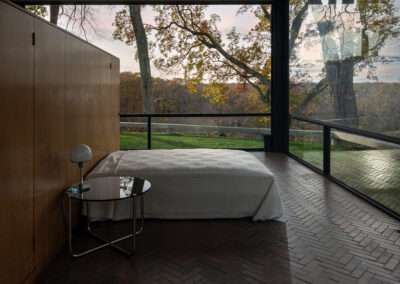 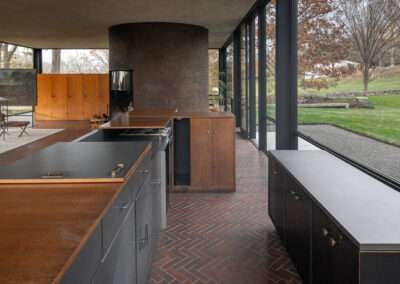 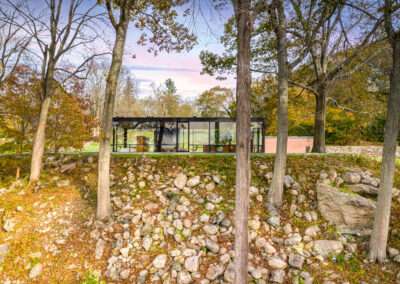 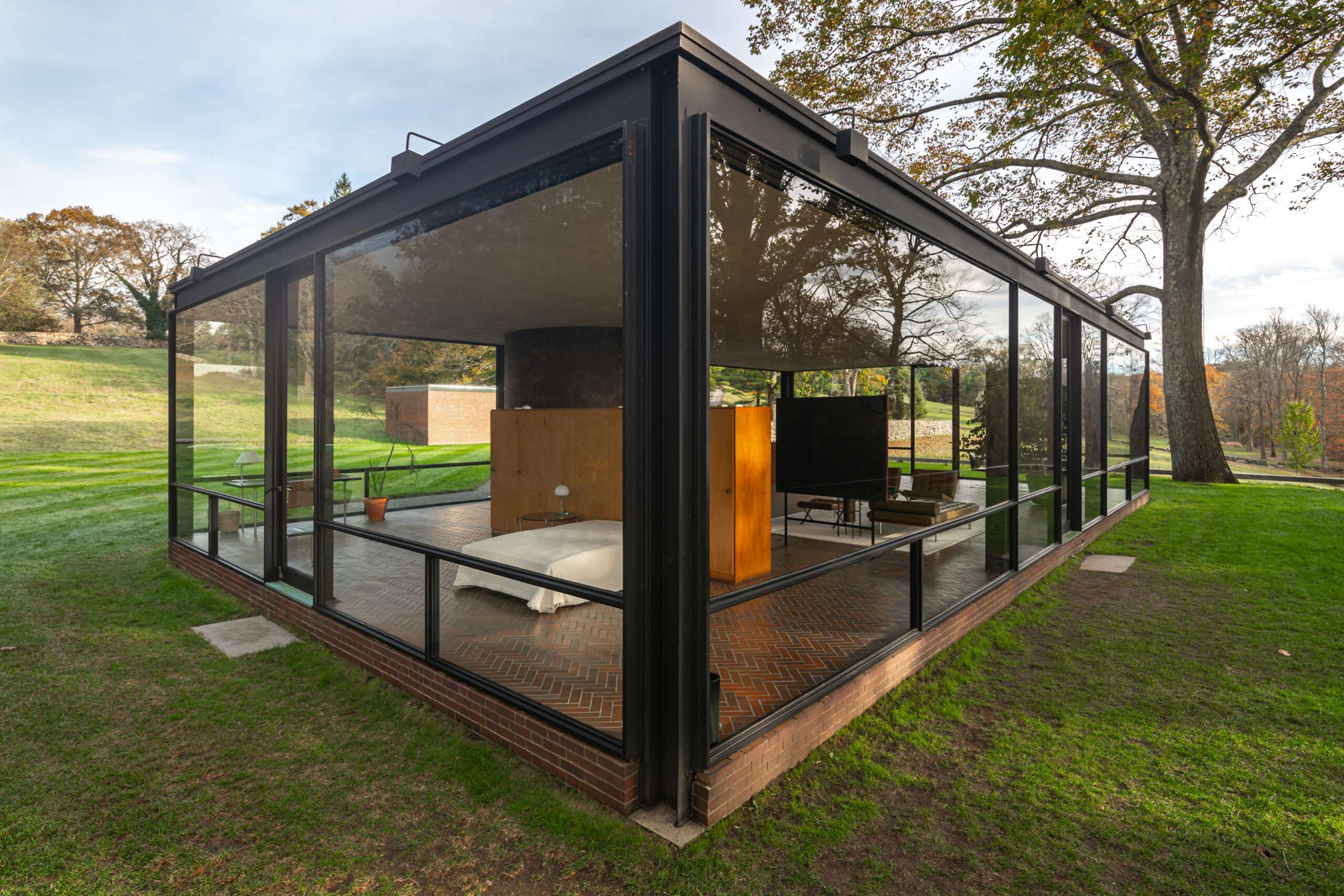 Completed in 1949, The Glass House was featured in the worldwide architectural press almost immediately. But not everyone in New Canaan was thrilled with the new notoriety of their gifted but eccentric neighbor.  As The New York Times reported: “Weekend crowds have been blocking traffic on Ponus Ridge . . . uninvited visitors tramp about to view [the houses] with mingled expressions of awe, wonder and indignation. They agree that nothing like it was ever seen in these parts.”

Having now passed the 70th Anniversary of The Glass House, it is as much a part of New Canaan as the town library and train station. Since 2007, it has been owned by the National Trust for Historic Preservation. Johnson willed it to the Trust with the idea that as many people as could be accommodated on the site could visit – mostly by convening at the Elm Street storefront that also doubles as a shop with Glass House memorabilia and taking the Glass House shuttle to the site for the complete guided tour.

Covid has been hard on the entire Glass House enterprise, as with so many historic sites. “We took time to get a Covid plan that would be safe for visitors and staff,” says Christa Carr, communications director for the Glass House. “But our attendance is obviously way down, and now increasing visitor traffic and raising money are dual goals, both so important.”

Carr says that The Glass House has been able to get National Endowment for the Arts, Connecticut Humanities and New Canaan Community Foundation grants, and that Johnson and his partner, the late David Whitney, left an endowment for the property. Nonetheless, all of this falls short of the funds needed to continue The Glass House as a major attraction. Carr explains that a substantial part of Johnson’s large collection of modernist art, worth perhaps in the hundreds of millions, was willed to the Museum of Modern Art in New York.

Ghost House (1984): a playful structure designed so that Johnson would have something interesting to look at out the window of his studio.

“In addition to daily operating expenses, we have some renovations that need to be done,” she continues. “We just completed work on the Sculpture Gallery, and the Brick House is much in need of renovation.” 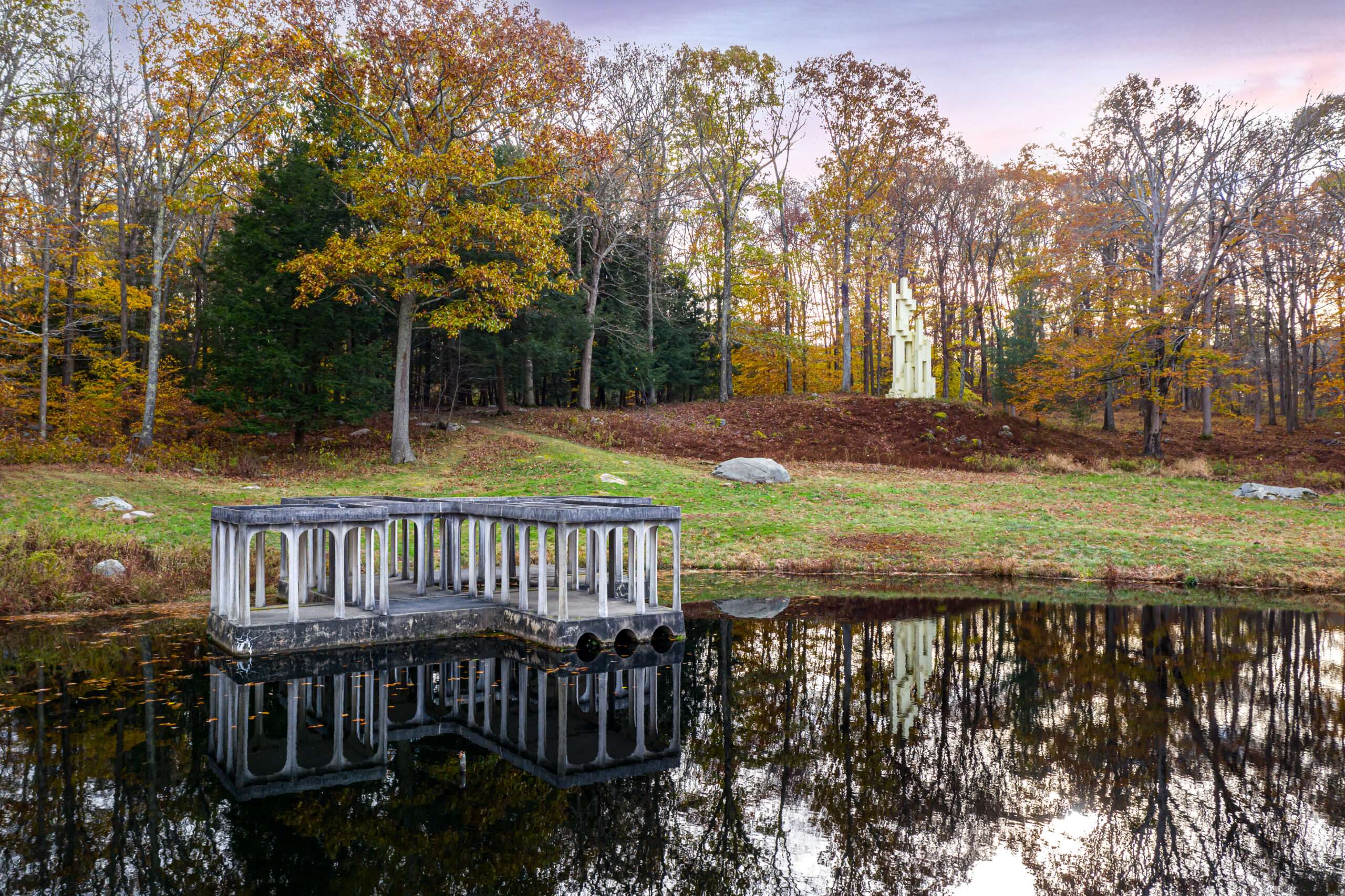 The Pavilion in the Pond (1962) is scaled down in size to play with the viewer’s sense of perspective, making it seem further away from the structure of The Glass House than it actually is. It represents an exploration of ideas realized in Johnson’s design of the New York State Theater at Lincoln Center (1964)

As with Olmstead’s New York Central Park, every hill, every tree, every bush looks like it belongs exactly where it is. 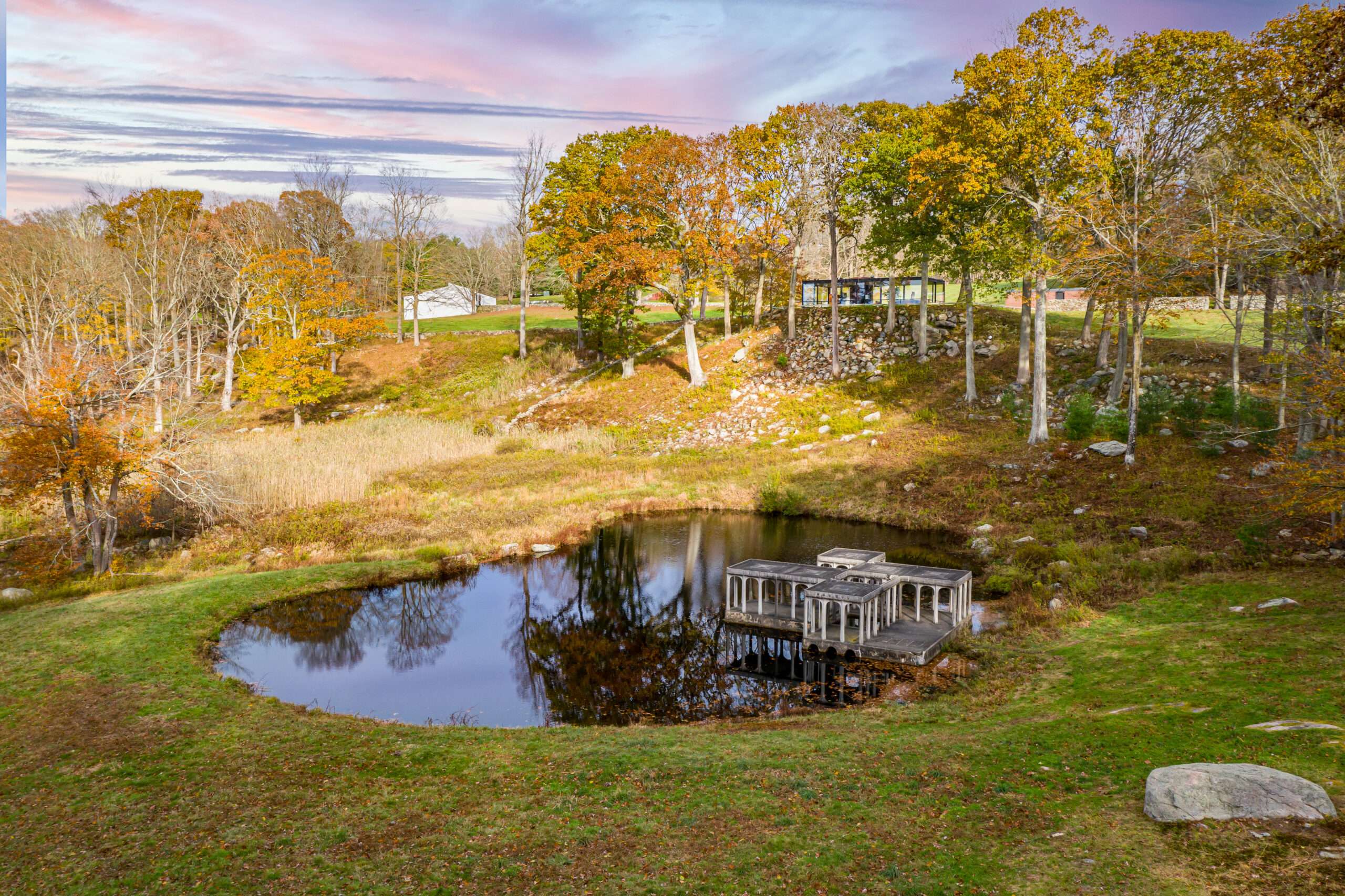 But more than that, the compound is a timeline of post-World War II American architecture. By the late 1950s and early 1960s, Johnson grew bored with the strident and doctrinaire modernism espoused by his mentor Mies van der Rohe. He wanted architecture that was of its time, reflective of the larger aesthetic tastes then sweeping the country. One of these trends was molding concrete into curvaceous forms. Down the hill from The Glass House, he envisioned a neoclassical pavilion fronting on a man-made pond. The structure explores ways in which designers use modern language while simultaneously exploring Renaissance architectural problems, like how to round a corner. The Pavilion also plays with notions of scale, appearing from a distance to be much larger than its actual size.

A few dozen feet from the main house is Guest House, built at the same time, that is virtually the inverse of The Glass House. It is fully enclosed in brick and provides the privacy not afforded by its transparent neighbor.

As the 1970s dawned, architects were increasingly willing to borrow from diverse architectural styles and movements. One of the results is Johnson’s Sculpture Gallery, which is based on the iconic Greek island village with its whitewashed buildings and interconnecting stairways. A series of ribbed skylights throw dramatic light and shadow throughout the interior, which is filled with important 20th Century sculpture. By the early 1980s, classical references in architecture were at full speed with the movement known as Postmodernism. Johnson would become one of the leading practitioners of this style, which is represented on the New Canaan property by the Library/Study, a jaunty mixture of a truncated cone and a cylindrical chimney. 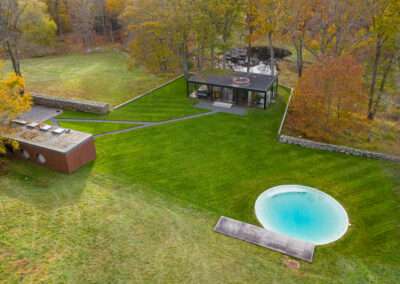 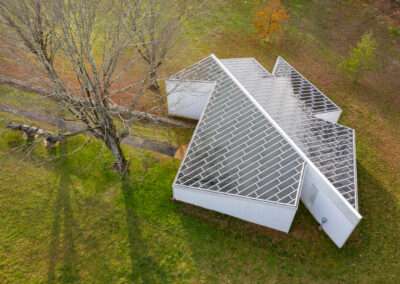 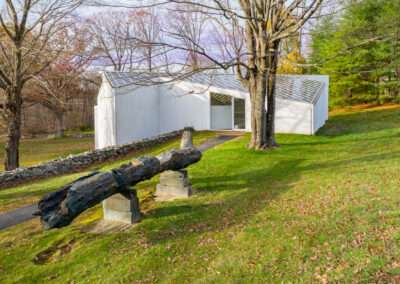 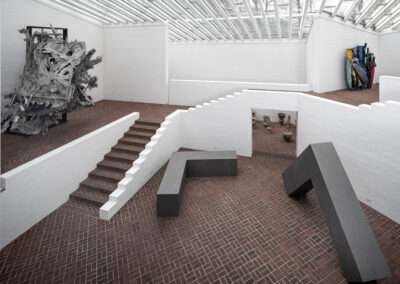 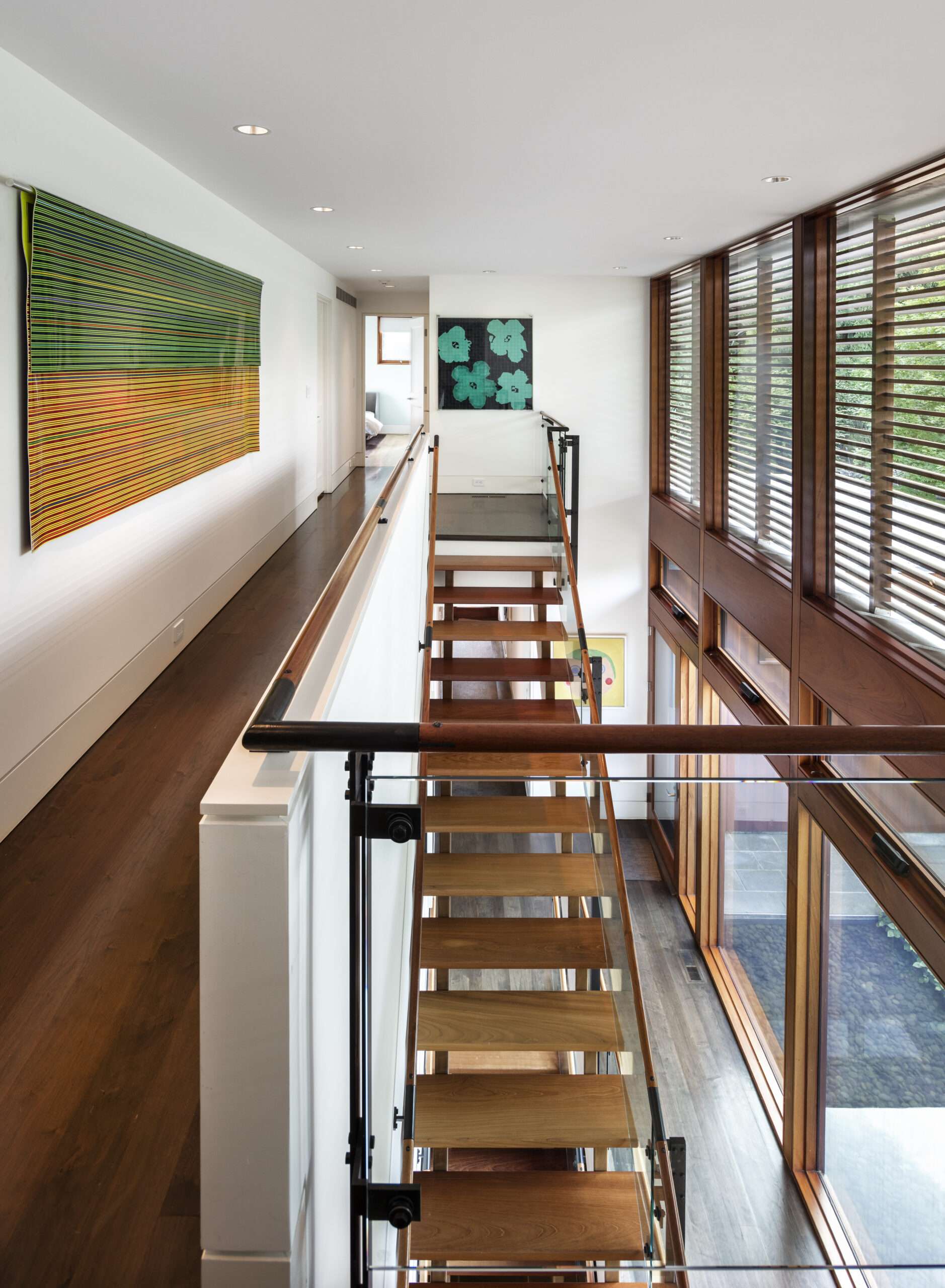 Johnson marked his ninth decade with a final indulgence—a 1995 entry pavilion/visitor center he nicknamed “Da Monsta.” The wild gyrating forms of the structure are Johnson’s take on early 20th Century German Expressionism as well as the work of his friend Frank Gehry, then becoming the leading expressionist and deconstructionist architect in the world.

The Glass House compound is, at its heart, an act of divine lunacy. It is, to my knowledge, the only private assemblage of buildings in the United States that traces our post-World War II architectural heritage. It is a sheer act of will on the part of an extremely talented architect who freely lifted ideas from architectural volumes, effortlessly, and without fear of accusations of design plagiarism. 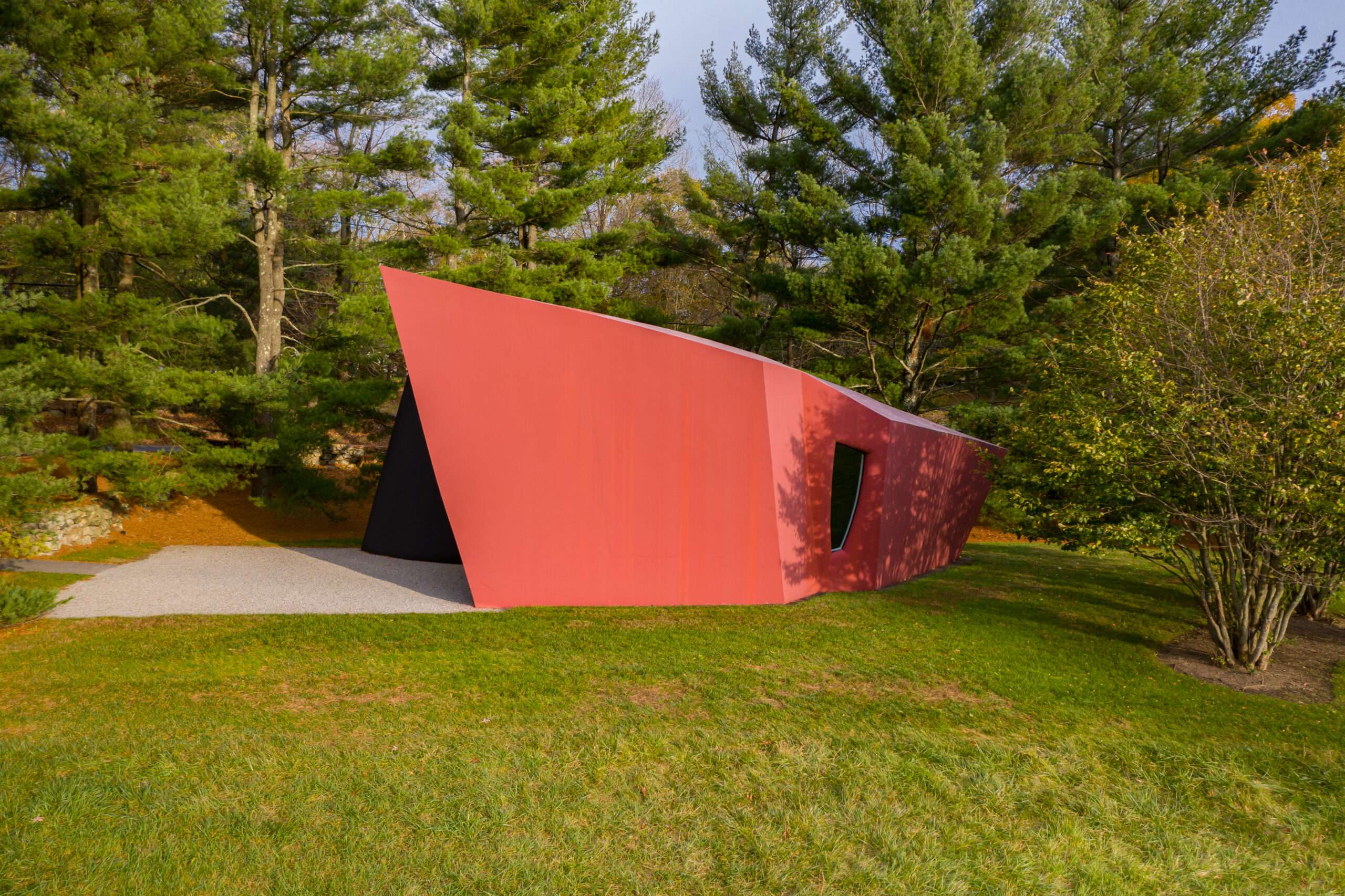 Fortune looked favorably on New Canaan that lucky day when Johnson showed-up in late 1945 to survey the land on Ponus Ridge Road. After all, there were many other Fairfield and Westchester communities equally as bucolic and appealing. With The Glass House compound now facing some challenging times, it is up to the communities that surround The Glass House to assure that it remains a local, regional, national and international destination – in perpetuity.