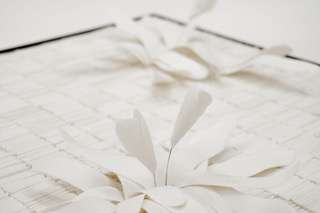 This is the first exhibition for Lucas Ferreira in the United States. Born and raised in Brazil, Ferreira’s success as an artist came about serendipitously when he moved to London in his early twenties to study cinema. He began working in ceramic as a means to support his film projects in what he dubs is “a capricious industry.”  As he explored the properties of porcelain ceramic and developed his own techniques and language, Ferreira found the demand for his work exceeding his wildest expectations.

For Ferreira, his work is a “celebration of irregularities” that begins with small, simple shapes which are then repeated thousands of times. Ferreira works with porcelain ceramic in its purest form, rolling the material out into paper thin sheets and allowing it to dry for about an hour. This prevents the porcelain from sticking to the tools he utilizes to cut the individual shapes. Each piece is meticulously hand-cut and allowed to dry further before being fired in a high-powered kiln. As the tiles are assembled together in an organized fashion, the hand-made becomes more evident. Rather than getting uniformly lost in the grouping, the individual character of each piece is accentuated adding dimension to the overall textured surface. Color, derived from natural minerals, also plays a part in his work, as the pieces can go from lighter to darker values, or make a statement of form and perspective against neutral backgrounds. Ferreira’s process develops organically, the composition and rhythm dictated by spontaneous thoughts and feelings of the moment. The results are landscape tessellations, fragmented shapes that are visual feasts made timeless with the use of ancient mosaic techniques. Ferreira also credits as influence the work of Sérgio de Camargo, the Brazilian sculptor and relief maker who became an important figure in the Latin American Constructivist movement.  Ferreira’s work has been the subject of many exhibitions in Europe and is in numerous private and corporate collections.  His mosaic compositions are also in high demand for site-specific commissions. Ferreira currently lives and works in London.

On view alongside Ferreira’s mosaics will be new work by gallery roster artist Valéria Nascimento.  Her artistic practice shares certain aspects with Ferreira in that she too makes the porcelain material paper thin before hand-cutting each piece individually. As with Ferreira, the porcelain is left in its natural, unglazed finish, and only colored with oxides or minerals. The similarities end there, however, for her shapes are directly inspired by nature and take on the forms of stunning botanical or aquatic installations. Flora, blooms, hibiscus, bamboo, branches, or coral, anemones, and the like grace the spaces they inhabit. Nascimento’s architectural background informs her intricate and detailed presentation, and her work is about bringing nature indoors. The exhibition will feature a site-specific wall-mounted “meadow” installation as well as other work new to American audiences.  Also included are works the two artists collaborated on, combining their distinctive aesthetics into three separate panels.  Nascimento has had a prolific career and has been extensively exhibited and written about. Her work is in multiple private and public locations throughout the world.

Gallery hours are Tuesday through Saturday; 10:30am to 5:30pm; and by appointment.